Tremors were felt in Abu Dhabi and Dubai after two earthquakes rocked Iran in the space of a minute on Sunday.

The impact was also experienced in the Northern Emirates.

A 6.2 magnitude earthquake was recorded in southern Iran at 4.07pm, followed by one measuring 6.7 a minute later, the National Meteorology Centre posted on Twitter.

The NCM said the impact was “slightly felt in the northern and eastern side of the country without effect”.

“I felt the ground shake and the lights were moving,” said Varsha Vasant, who works in the D3 area of Dubai.

Residents posted videos on Twitter of items in their flats being shaken by the quake roughly 1,000km away.

They told how some buildings and offices were evacuated as a precaution.

A number of countries across the region have been affected by the quake.

The UAE has previously dealt with the after-effects of Earthquakes in Iran. 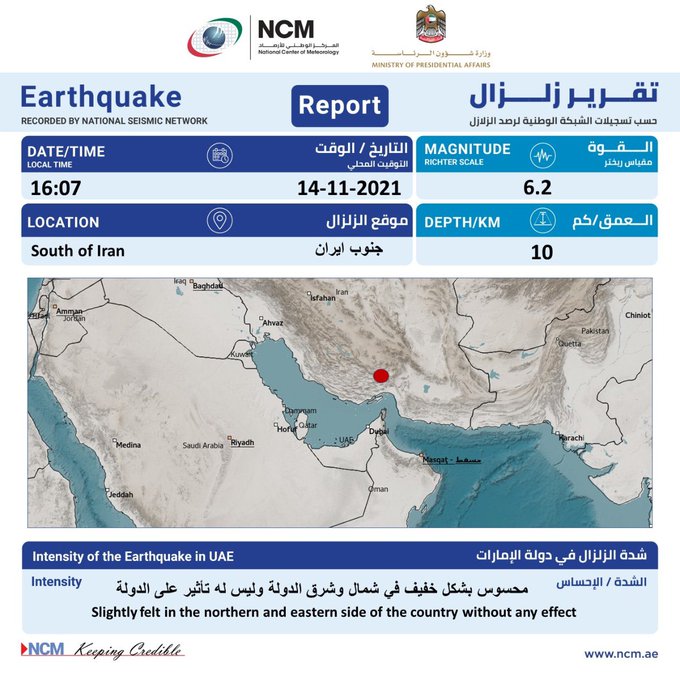 The country has also been hit by earthquakes, albeit on a smaller scale.

A ‘micro-earthquake’ — of 1.9-magnitude — struck Dibba on the UAE’s east coast last month.

Tremors were felt in the Emirates after a 5.1-magnitude earthquake struck Iran last June.