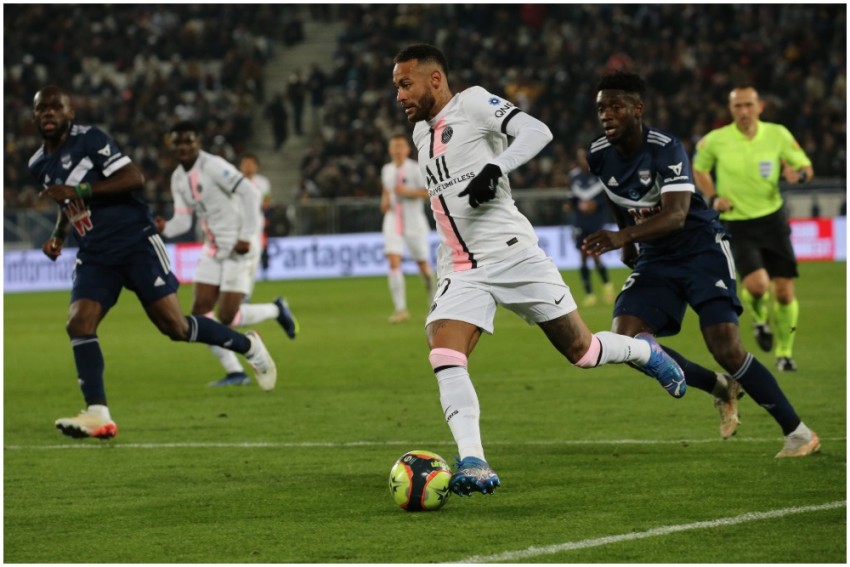 PSG’s Neymar with the ball during the League 1 match between PSG and Bordeaux at the Matmut Atlantique stadium in Bordeaux on November 6. | AP

his decline was premature with two sharply taken first-half goals on Saturday
as Paris Saint-Germain hung on to win 3-2 at Bordeaux in Ligue 1.

The Brazilian had only scored one goal for PSG this season, and that was a
penalty in September, but he struck from open play in the 26th and 43rd
minutes, both times set up by Kylian Mbappe.

Mbappe also scored as, in the absence of injured Lionel Messi, the two
superstars made the difference in a well-balanced game.

For his first goal, Neymar collected a floated pass on the left of the
penalty box, stepped inside and unleashed a shot between two defenders inside
the post.

Neymar again cut in for the second, dancing past several defenders before
exchanging passes with Mbappe and hitting the return first time, low and
again just inside the post.

Speculation had swirled around Neymar’s appetite for the game since he said
in October that next year’s World Cup in Qatar would be his last as he
“doesn’t have the strength to put up with more football”.

Mbappe added a third in the 63rd minute after PSG caught Bordeaux’s defence
high up the field.

With defenders trailing far behind, Georginio Wijnaldum raced through on
goal, drew keeper Benoit Costil and side-footed the ball to Mbappe for a tap
in.

The brilliance of the two stars seemed to have settled the match, but
Bordeaux hit back.

Alberth Elis gave the home team late hope when he scuffed home a 74th-
minute goal after PSG gave the ball away trying to play out of their own
penalty area.

Two minutes into added time, M’Baye Niang finished off a pacy attack
scooping home his first goal for Bordeaux after a sharp exchange with Jimmy
Briand in the box.

But PSG had barely kicked off again when the whistle sounded.

“We could have killed the game much earlier,” he added. “We can’t lead 3-0
and let in two goals.”

PSG moved 10 points clear of second-place Lens, who thrashed Troyes 4-0 on
Friday. Nice, who host Montpellier on Sunday, are another point further back.

Earlier, champions Lille continued to struggle to hold a lead in Ligue 1 as
they conceded an 83rd-minute goal and drew 1-1 at home against Angers.

A week after they led away to PSG until the 74th minute only to lose, Lille
went ahead when Tiago Djalo struck in the 28th minute, slotting home from a
free kick by Renato Sanches.

But they allowed a late equaliser from Azzedine Ounahi who calmly finished
from a far-post cross by Sofiane Boufal.

Lille remain in 12th and are 18 points behind PSG.

“It’s a strange feeling,” said Lille coach Jocelyn Gourvennec. “We dropped
two points while we had the feeling we were in control of the game but it was
not fluid either.”

Neymar strikes twice as PSG hold on to beat Bordeaux

US condemns attack on Iraq PM as ‘apparent act of terrorism’

Iraq PM calls for ‘calm’ after drone attack on his residence

Momen for addressing needs of differently-abled

Trial of arrestees in communal attacks will be completed quickly: AG