The requirement to be vaccinated or face weekly coronavirus tests will apply to over 80 million Americans working for private companies. 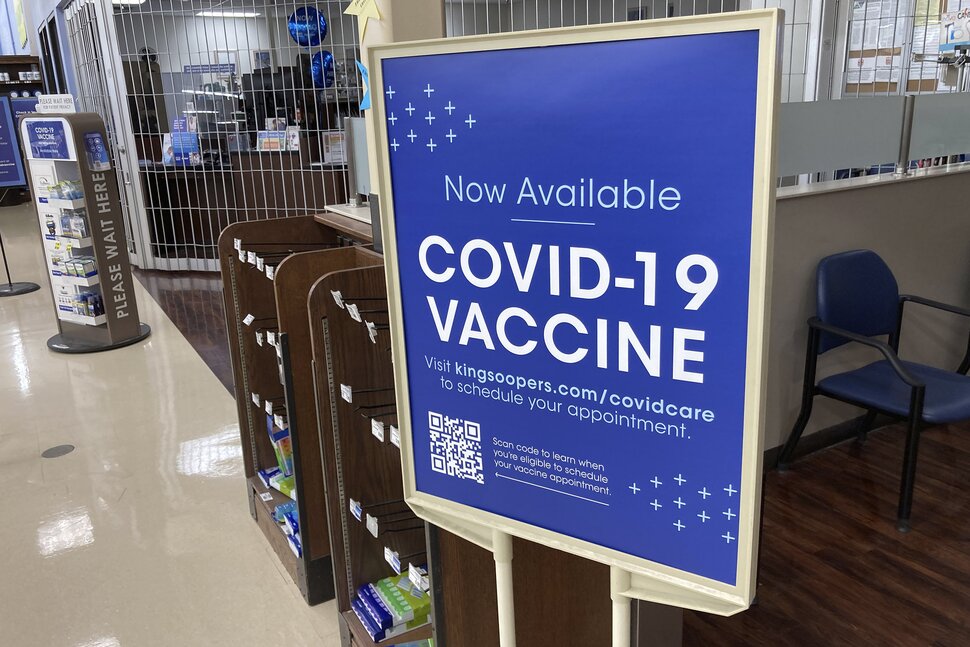 A sign notifies customers that COVID-19 vaccinations are available at a pharmacy in a grocery store, Oct. 23, 2021, in Monument, Colo. (DAVID ZALUBOWSKI/AP)

Private companies with more than 100 employees will need to require workers to get vaccinated or face weekly tests by early next year under a new Biden administration rule that carries the possibility of workplace inspections and stiff financial penalties for noncompliance.

The companies must make sure employees have had their final COVID-19 vaccine dose no later than Jan. 4 under the new rule, which senior administration officials detailed on a call with reporters Wednesday night. At that point, any unvaccinated workers will need to produce a negative COVID-19 test at least on a weekly basis to go into the workplace. The rule does not require employers to pay for the tests.

The Biden administration first previewed the rule in September, saying it would affect over 80 million workers. Republican governors responded by threatening legal action, to which Biden quipped: “Have at it.”

“Higher vaccination rates protect our workers, reduce hospitalizations and death,” a senior administration official said on the call. “This is good for workers and, importantly, this is good for the economy.”

The Biden administration estimated that the rule will save thousands of lives and prevent over 250,000 hospitalizations in the six months after implementation.

After the Jan. 4 deadline, enforcement efforts could include on-site inspections. A single violation may result in a fine of nearly $14,000, according to a senior administration official, but the fines can be much higher if a company is “willfully” violating a standard.

Vaccine exemptions for medical or religious reasons are allowed, but “it is the responsibility of the facility to have a plan in place to make sure they comply with the exemptions,” according to a senior administration official.

The Jan. 4 deadline will also apply to vaccine requirements for federal contractors, which previously had a deadline of Dec. 8, as well as health care workers who work at facilities that receive Medicare and Medicaid, “to make it easy for businesses and workers to comply,” according to a fact sheet from the White House.

The policies “will protect workers and drive additional progress in getting millions of Americans vaccinated,” a senior administration official said.

In total, the federal government’s vaccination requirements are expected to cover over two-thirds of all the workers in the U.S., or about 100 million Americans.

The rules “preempt any inconsistent state or local laws, including laws that ban or limit an employer’s authority to require vaccination, masks or testing,” the fact sheet stated.

More than 80% of adults are at least partially vaccinated against COVID-19, according to data from the Centers for Disease Control and Prevention.

Risks Are High at Low-Volume Hospitals

Dems Nix $100B for Schools From Spending Plan