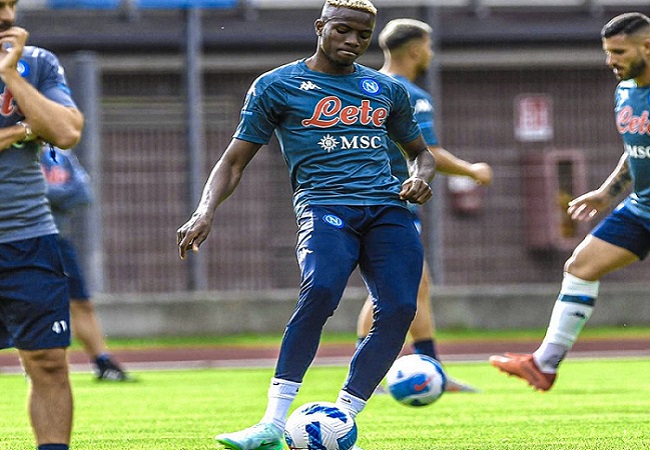 Nigeria international Victor Osimhen participated in full training in Friday’s workout at SSC Napoli Konami Training Center. And if the latest training report Napoli published on their official website is anything to go by, Osimhen is normally in contention to be selected in the matchday squad for the Blues’ Serie A clash against Verona on Sunday.

Previously, Osimhen was not able to take part in all the sessions due to a calf injury he aggravated in training a week ago.

The 22-year-old missed Napoli’s 1-0 win at Salernitana at the end of October. And he wasn’t risked for the trip to Legia Warsaw on Thursday.

As is customary the day after a match, the players that started against the Polish side had a recovery session in the gym, while Osimhen and the rest of the squad worked with the ball. And were also involved in a tactical session.

The Super Eagle has been firing on all cylinders since the start of the season, scoring nine goals in twelve appearances for the Parthenopeans.

The Nigeria Football Federation and manager Gernot Rohr were sure Osimhen did not suffer a serious injury, hence his inclusion on the roster for the upcoming matches against Liberia and Cape Verde.