Chelsea defender Trevoh Chalobah has signed a four-and-a-half year contract with the club following his performance this season.

The young defender, who turned 22 in July, has played 10 times under Thomas Tuchel so far this term and scored a memorable goal against Crystal Palace on his first appearance at Stamford Bridge.

The emotion of that strike brought the Academy graduate, who has been at the club since the age of eight, to tears and sealed a 3-0 win against the Eagles on the opening day of the campaign. 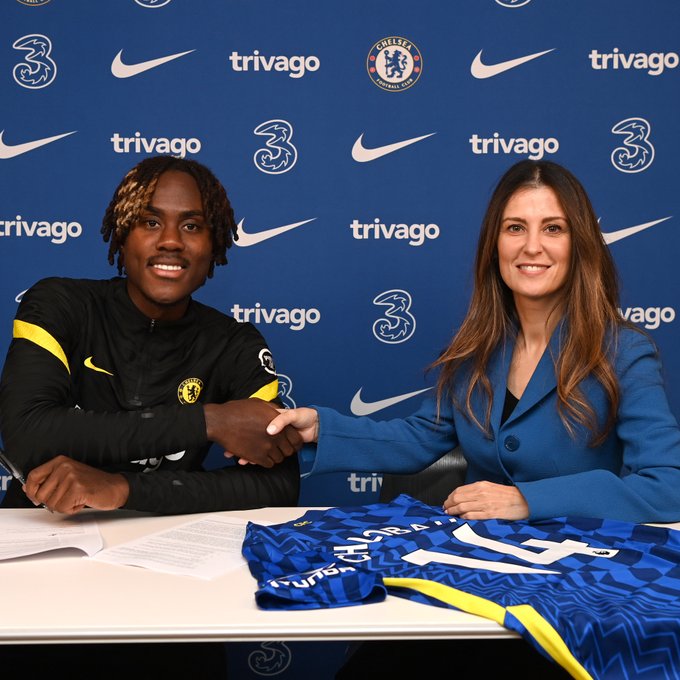 He made further Premier League starts against Aston Villa, Southampton, Brentford and Norwich City, opening the scoring against the Saints with a stooping header at the back post.

That followed a full debut in the UEFA Super Cup and a Champions League debut, which came in Turin away at Juventus in September.

On signing his new deal, which runs until summer 2026, Chalobah said: ‘It’s quite surreal.

” It’s a dream for me to sign a new long-term contract for my boyhood club and hopefully the dream continues.

“It’s been an unbelievable start to the season and something I never expected but it just shows that the hard work I’ve put in and going out on loans has paid off.

“I tried to impress the manager in pre-season and then take that into the games so it’s been good and consistency now is the key to keep those high levels.’

Reacting to the Chalobah’s new deal, Chelsea director Marina Granovskaia said the club was proud of fhd the deal.

“To see Trevoh joining so many of his fellow Academy graduates in the men’s first team is something we are exceptionally proud of as a Club.

“When he scored in the first game of the Premier League season, it was an emotional moment for everyone involved in his progress to this point.

“His performances in the early months of the season as well as his attitude and professionalism have impressed us all and we are very pleased to be able to reward Trevoh’s progress with this new long-term contract.’

Prior to his breakthrough in SW6 this term, Chalobah has spent three years cutting his teeth out on loan, in the Championship with Ipswich Town and Huddersfield Town, as well as  in Ligue 1 last season with Lorient.

He has split playing time between central defence and midfield, playing over 100 times and gaining invaluable experience of both domestic and continental football.

On the international stage, he has played for England up to Under-21 level.