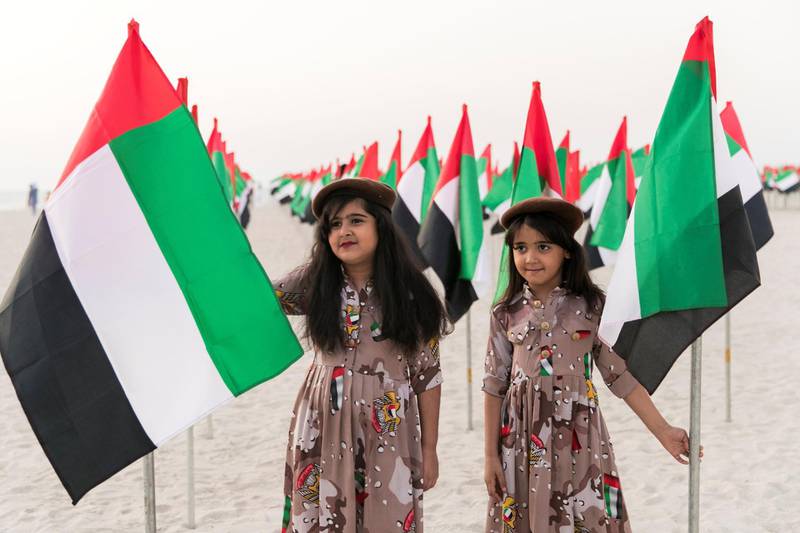 The occasion has been marked every year since 2013, but unlike some celebrations it is not a public holiday

At 11am on Wednesday, citizens and residents across the UAE will mark Flag Day.

It will be the eighth year in which the annual celebration has taken place.

But what is Flag Day? How did it start? And what rules exist around flying the UAE flag?

What is Flag Day?

Flag Day was first celebrated in 2013.

The idea was conceived by Sheikh Mohammed bin Rashid, Vice President and Ruler of Dubai, to celebrate the accession of Sheikh Khalifa as President of the UAE in 2004.

It is commemorated every year on the anniversary, November 3. It is not a public holiday.

Sheikh Mohammed, who is also the Ruler of Dubai, recently tweeted urging citizens, companies and ministries to mark the occasion.

“We call on our citizens, organisations, and ministries to hoist the flag simultaneously on November 3 at 11:00 am to express the unity of our home and our destiny,” he wrote.

How the UAE flag should be flown

The UAE has strict laws regulating the flying of the country’s flag.

Standards set by the Emirates Authority for Standardisation and Metrology say the flag should be rectangular in shape, its height half of its width and the colours in the correct order.

The owner must check on the flag’s condition every 45 days to ensure it is not damaged and it must be changed every six months.

The rules apply to situations where a flag is hung permanently at government buildings or embassies.

But there are regulations to govern the short-term use of flags as well. They stipulate that the flag should be made of nylon and it must weigh more than 122.5 grams per square metre.

The penal code includes fines and even jail for those who abuse the flag.

According to Article 176, “anyone who publicly insults the President, flag or the national emblem of the State, shall be punished by detention”.

Article 3 of federal law No 2 for 1971 says whoever uses the flag inappropriately will face a jail sentence up to six months, and / or a fine; “as the country’s flag should be treated with dignity and respect, and should not be insulted, and not raised below any other flag or banner.”

What happens on Flag Day?

The day is marked by schools, government offices, businesses and individuals, who hang the country’s banner outside their homes and workplaces.

Flag-raising ceremonies, in which the national anthem is played, are also held to mark the occasion.

The flag holds a special place in Emirati culture, and if you want to fly one there are special considerations you must keep in mind.

Who designed the flag?

Abdullah Al Maainah, after entering a competition in Al Ittihad newspaper to design the flag in 1971, inspired by the poet, Safi-u-ddin Al Hali.

The young Emirati intended the four colours to represent Arab unity, as described in poetry written by Al Hali.

His submission beat more than 1,000 entries to be selected to represent the new nation.

Mr Al Maainah was 19 at the time, and later went on to become the minister of foreign affairs.

READ MORE
WATCH: Everything you need to know about Flag Day
Raise the UAE flag with dignity or risk fines and jail time, say officials

Only two flags were raised in December 1971 to mark the formation of the nation – one in Abu Dhabi, the other at Union House in Dubai.

On Wednesday there are likely to be hundreds of thousands.

Do the colours of the flag hold any special meaning?

There are three horizontal bands of green, white and black, with a vertical strip of red next to the mast.

The flag’s four colours – known as the pan-Arab colours – each represent a different attribute.

They are red for courage, green for hope, white for honesty and black for strength of mind. Together, they represent the unity of Arabs.

When is Flag Day 2021 and is it a holiday in the UAE? (thenationalnews.com)