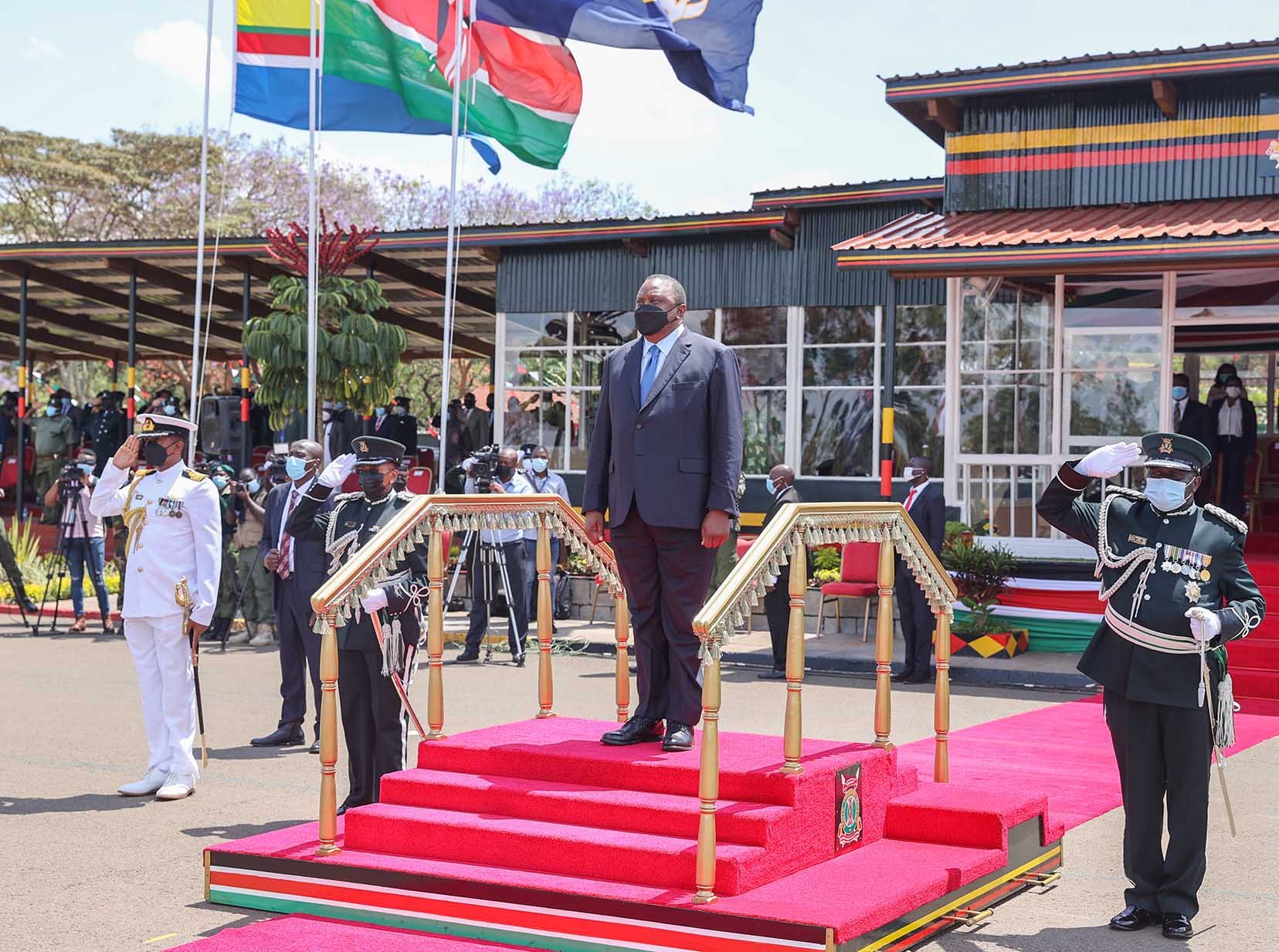 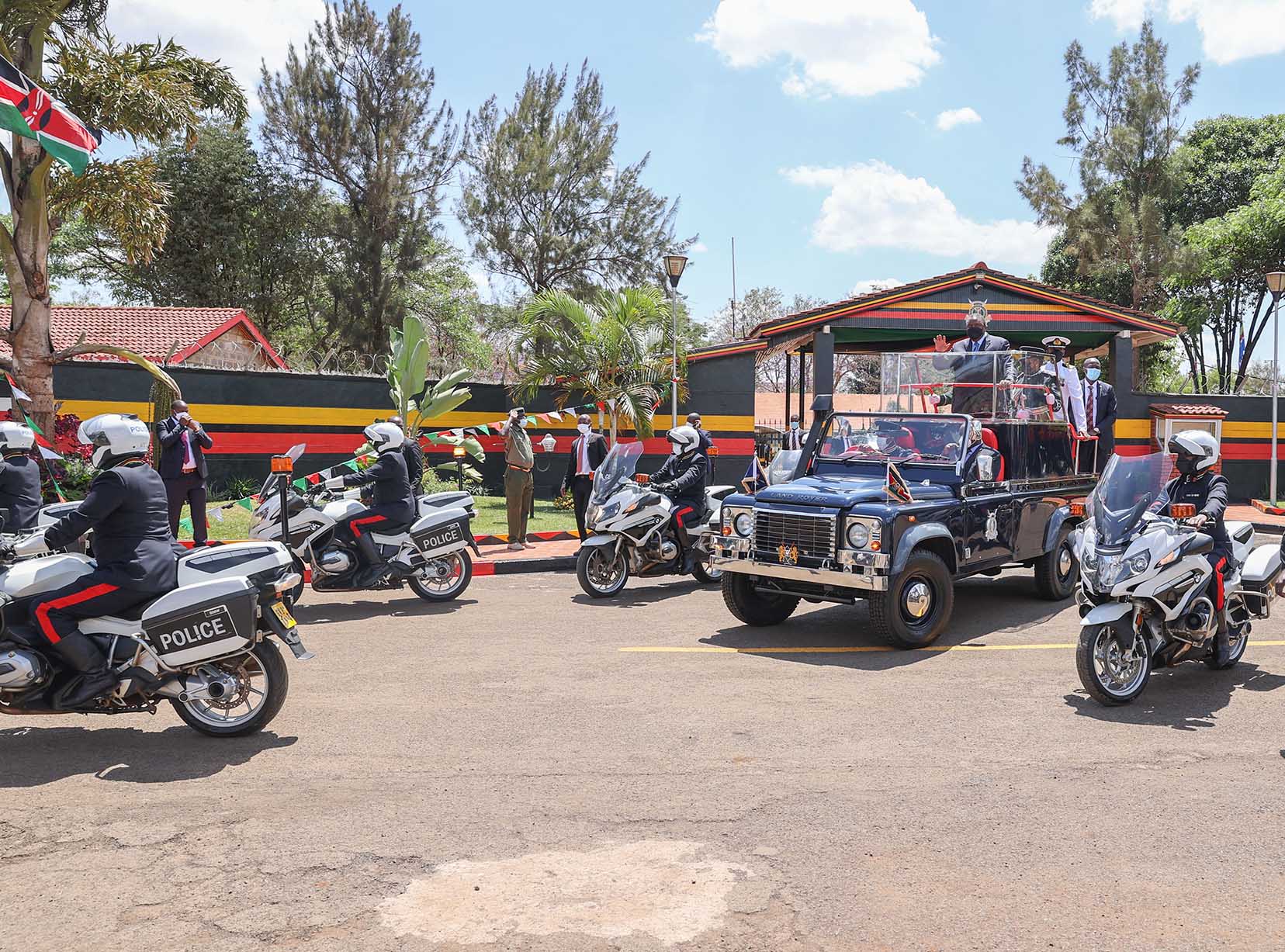 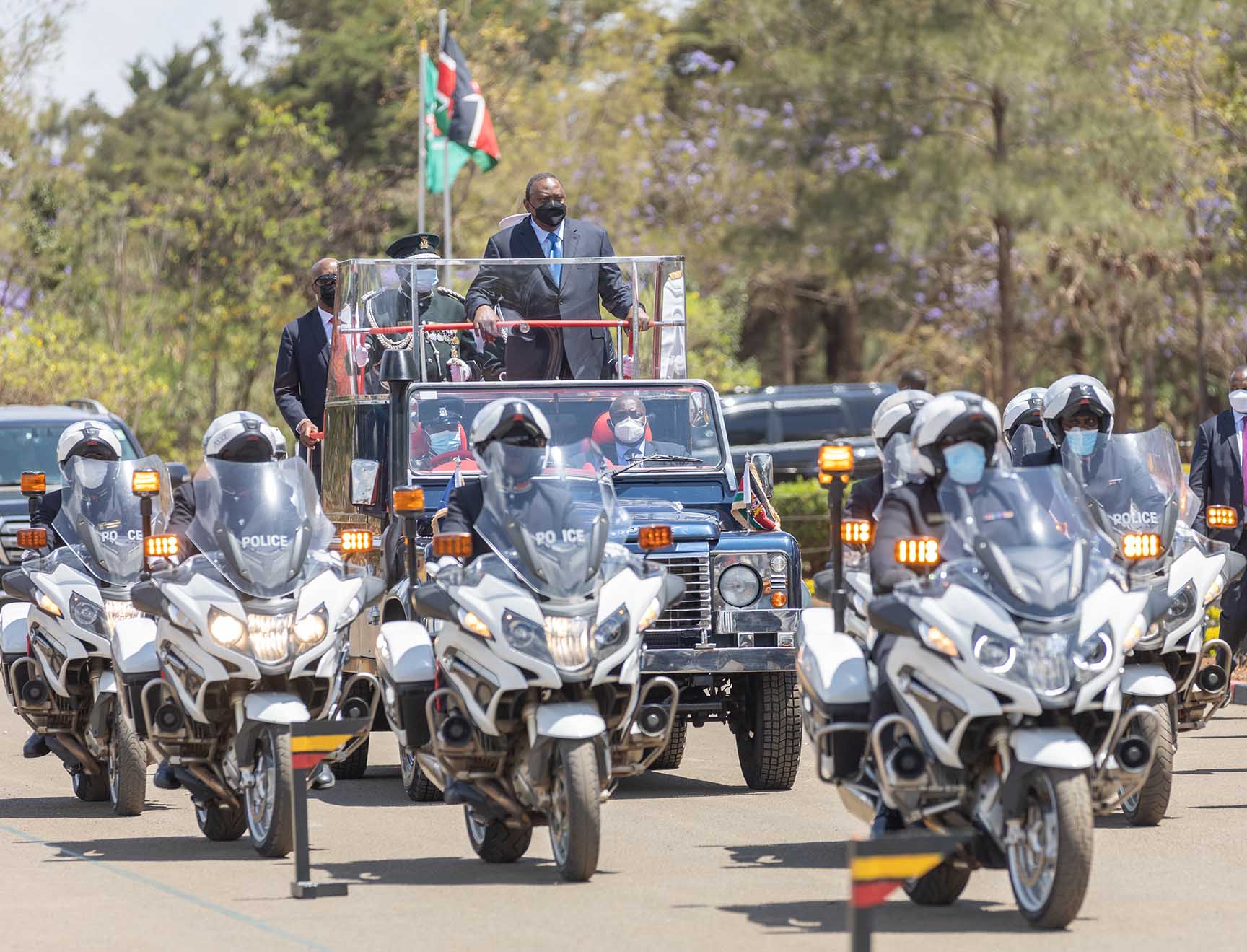 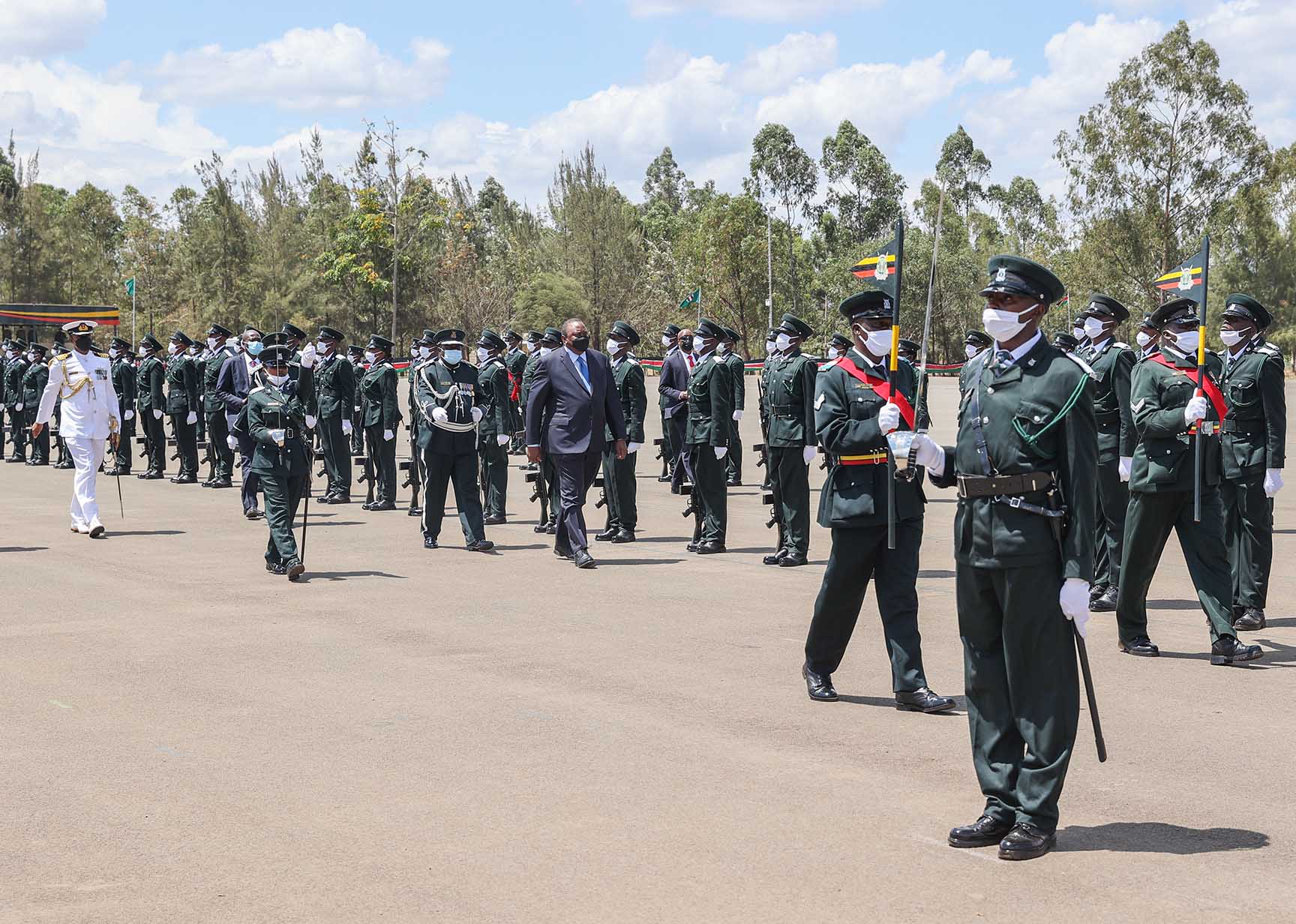 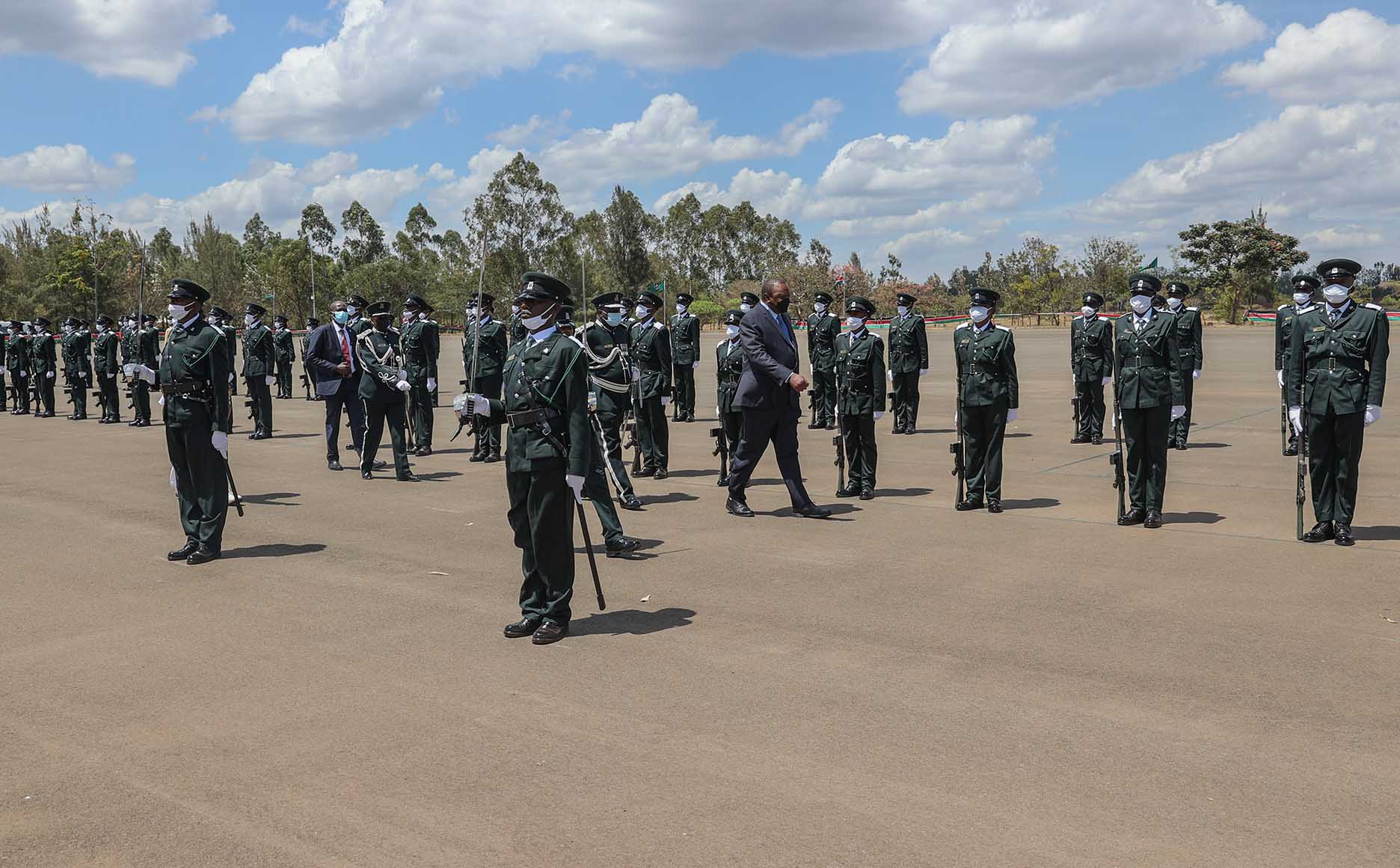 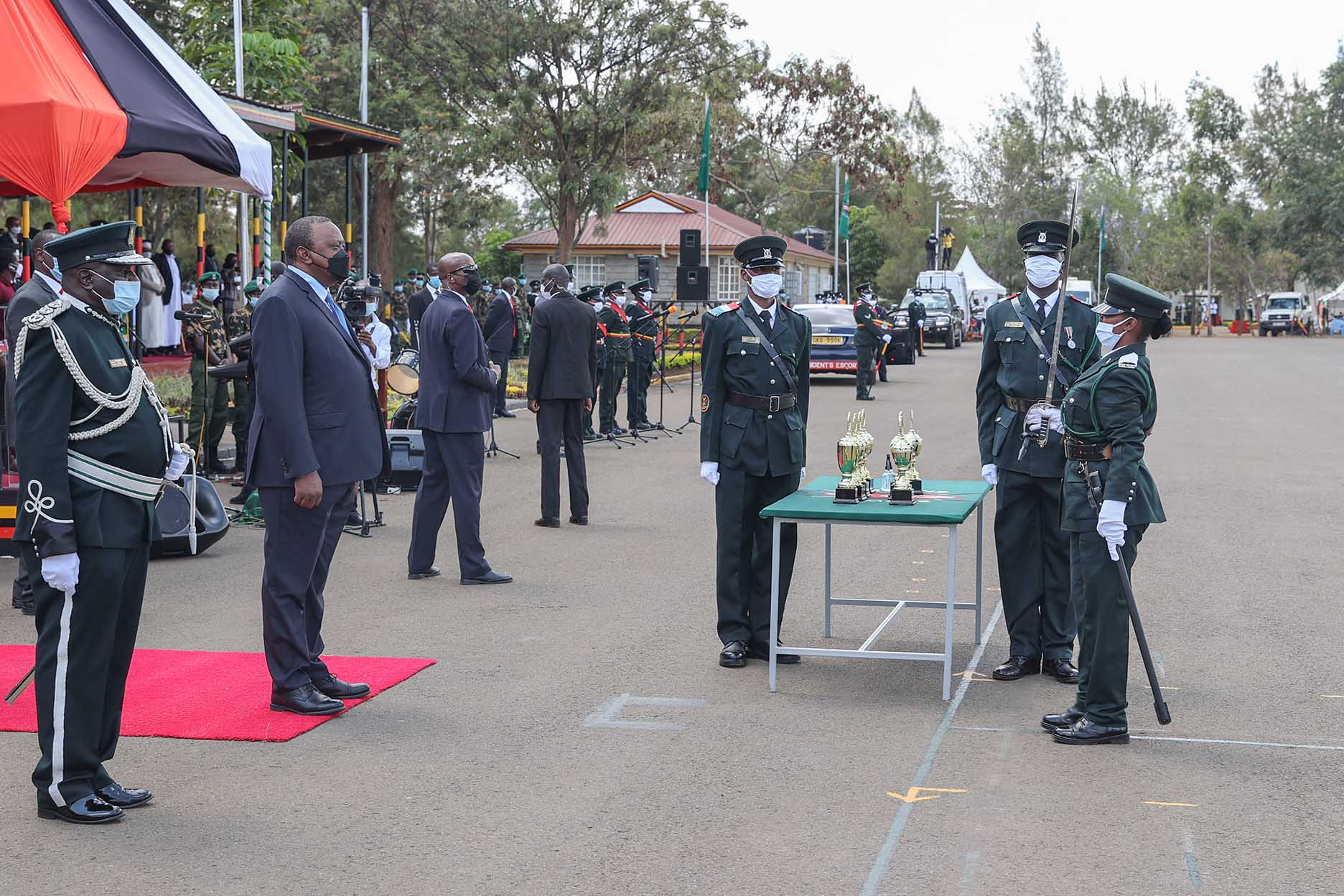 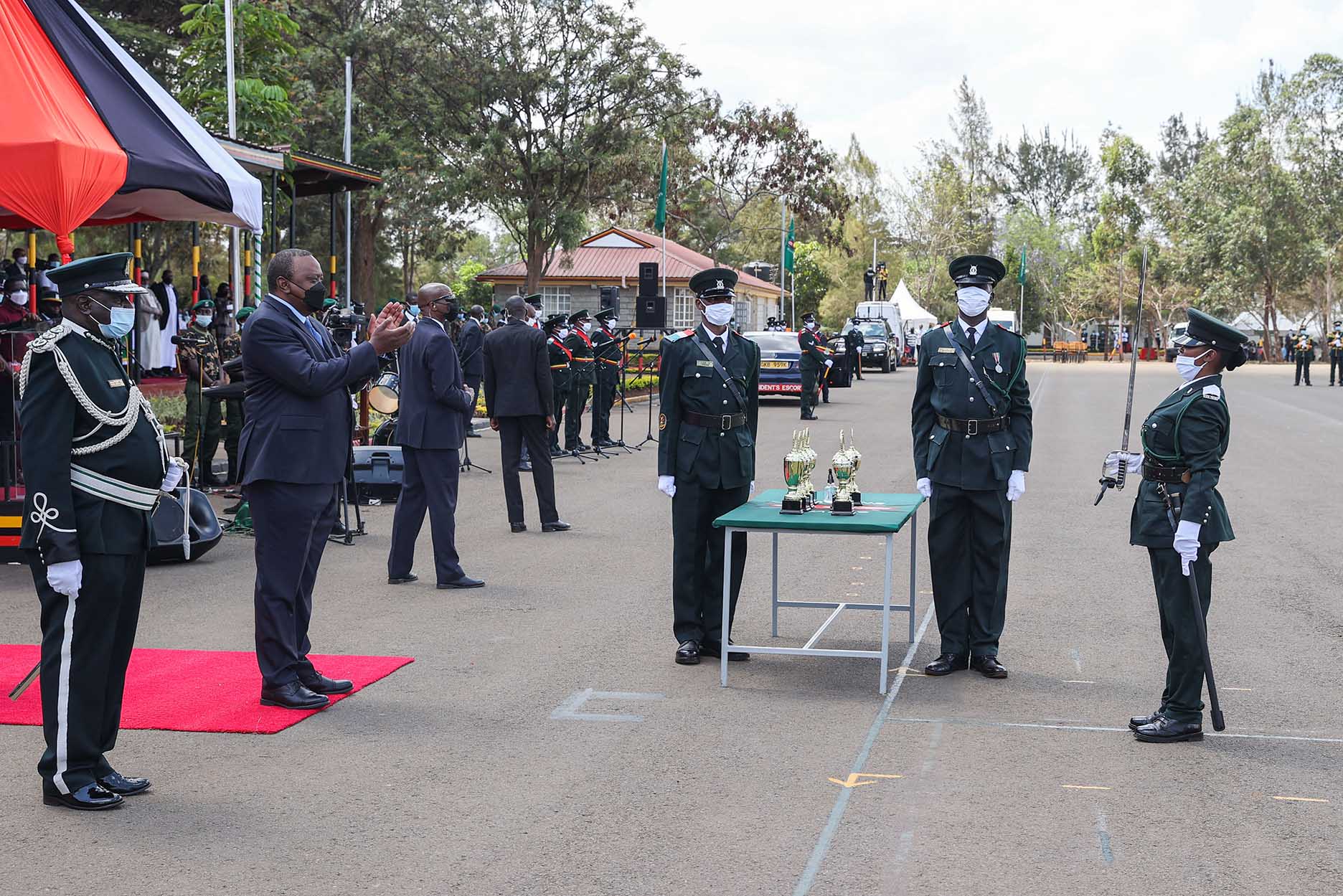 President Uhuru Kenyatta congratulates a section of the Cadets who emerged top in various disciplines moments when he presided over the Passing-out-Parade of Prisons Cadet Officers at the Prisons Staff Training College (PSTC) in Ruiru, Kiambu County. 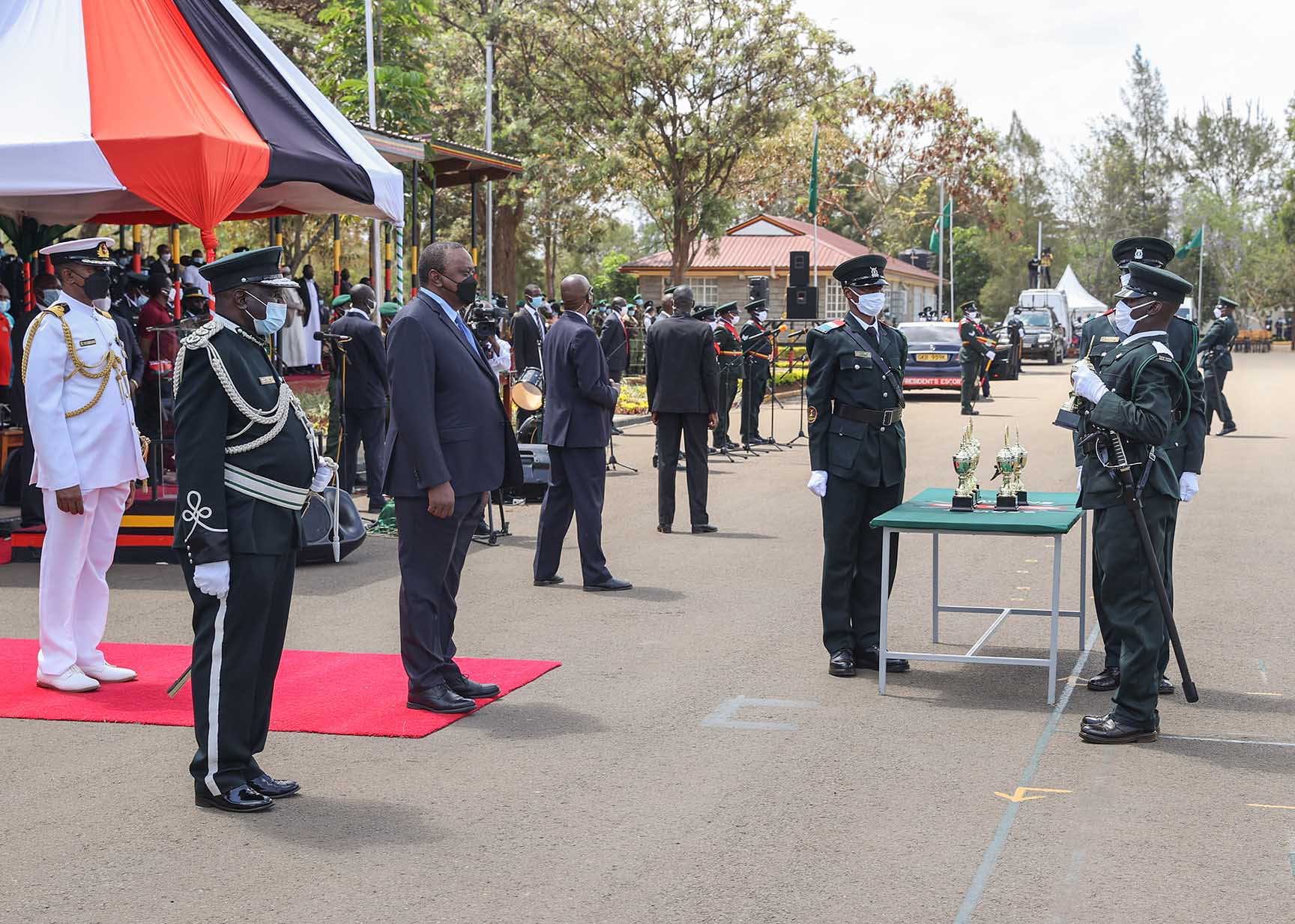 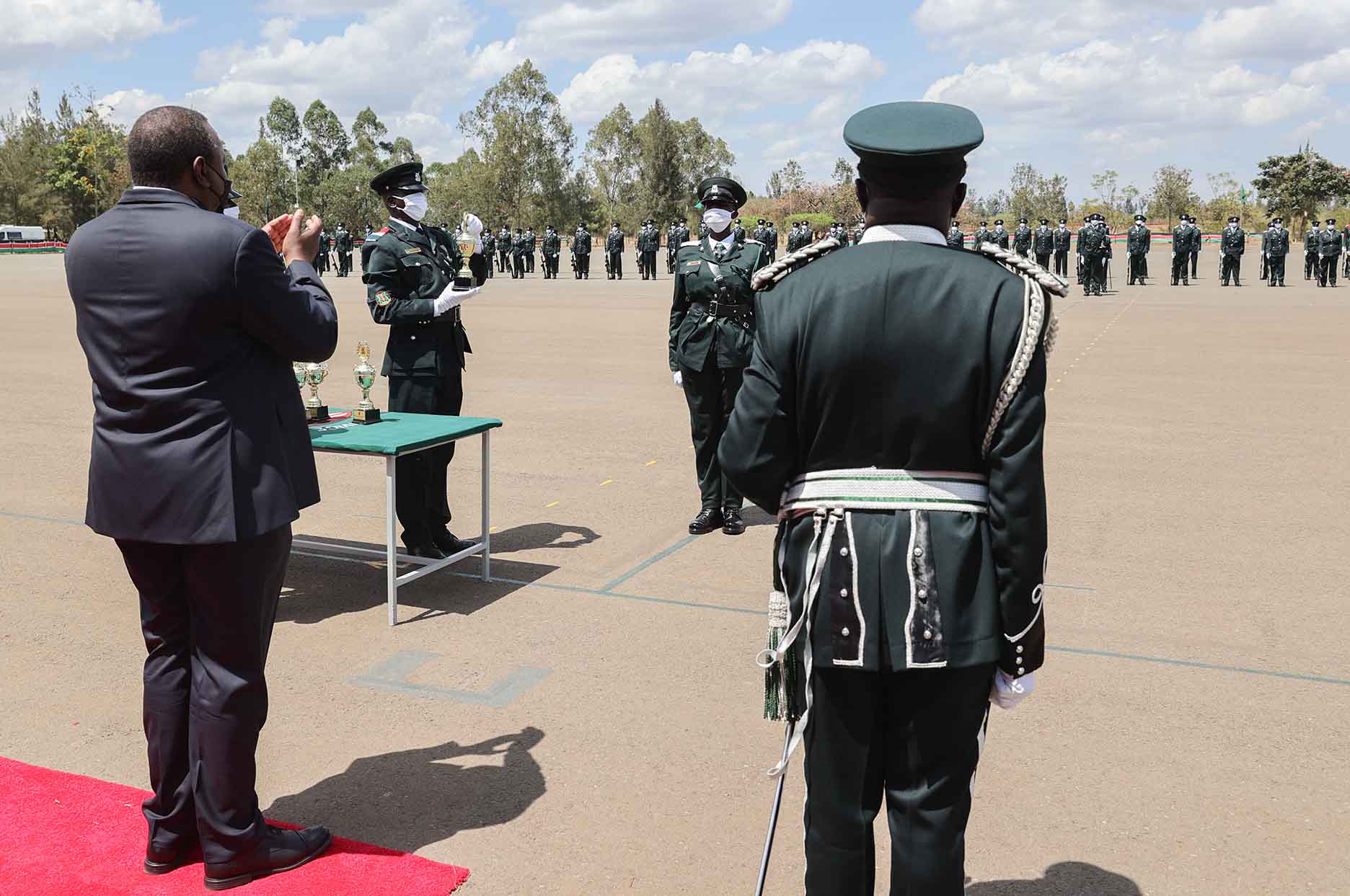 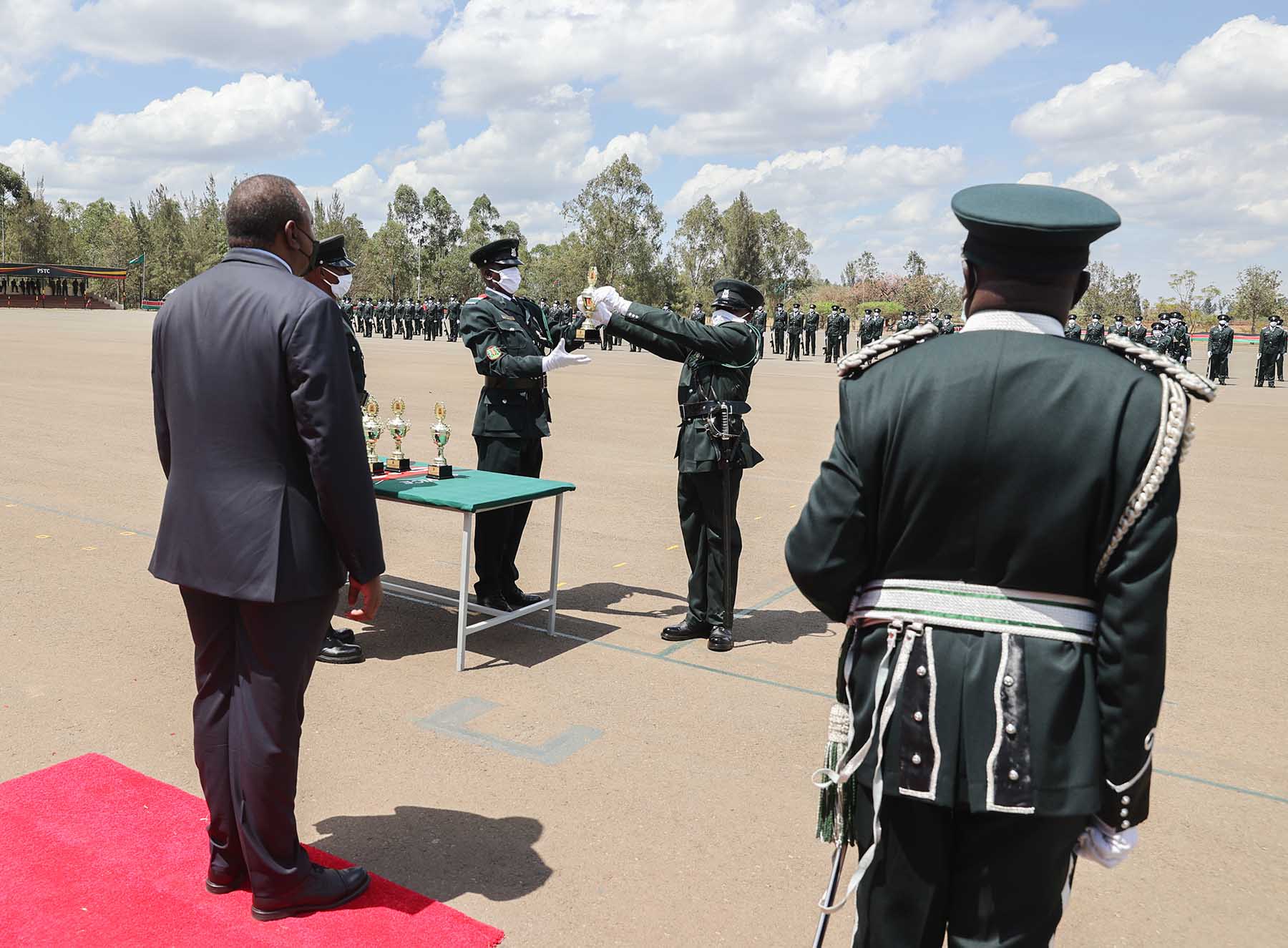 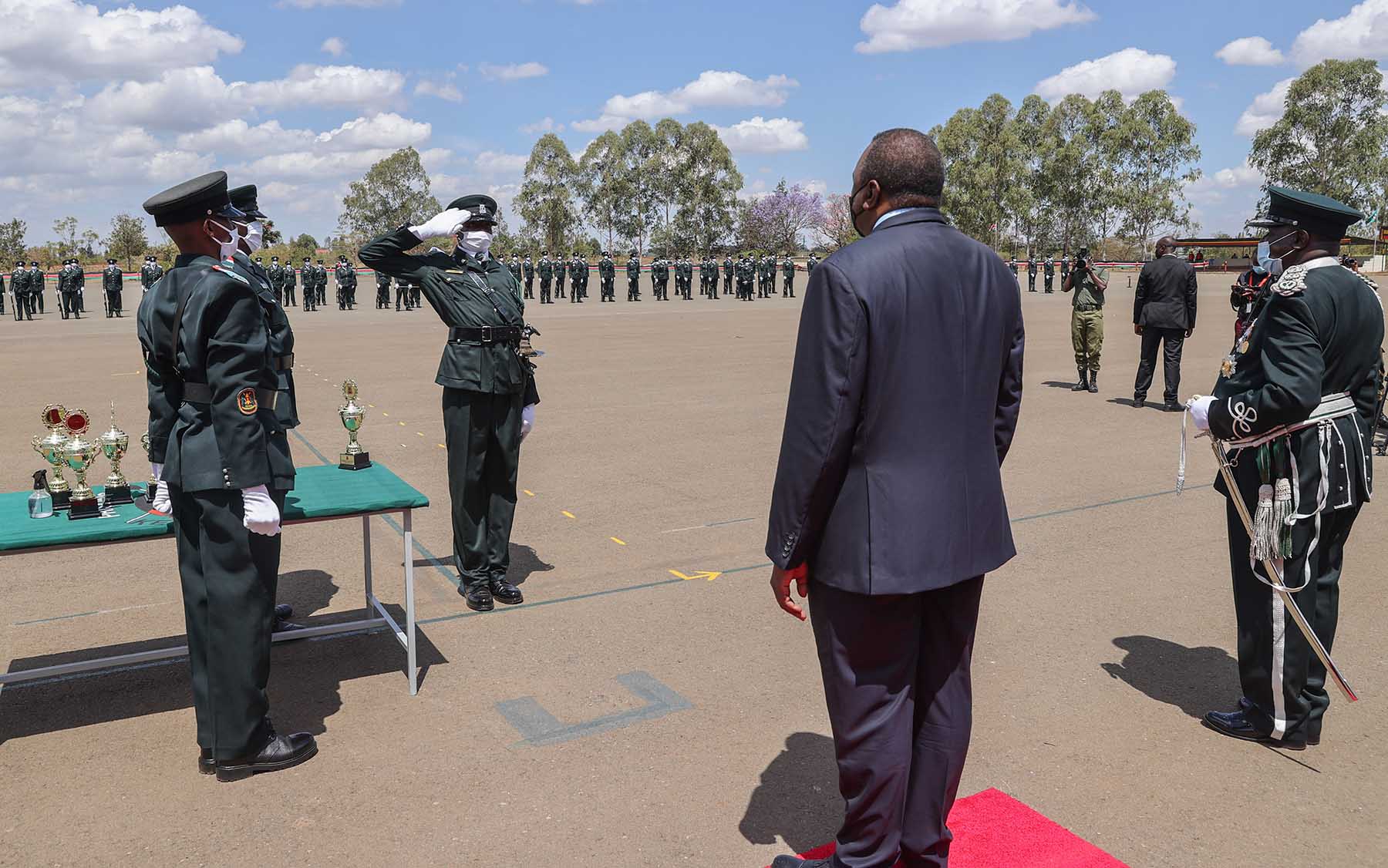 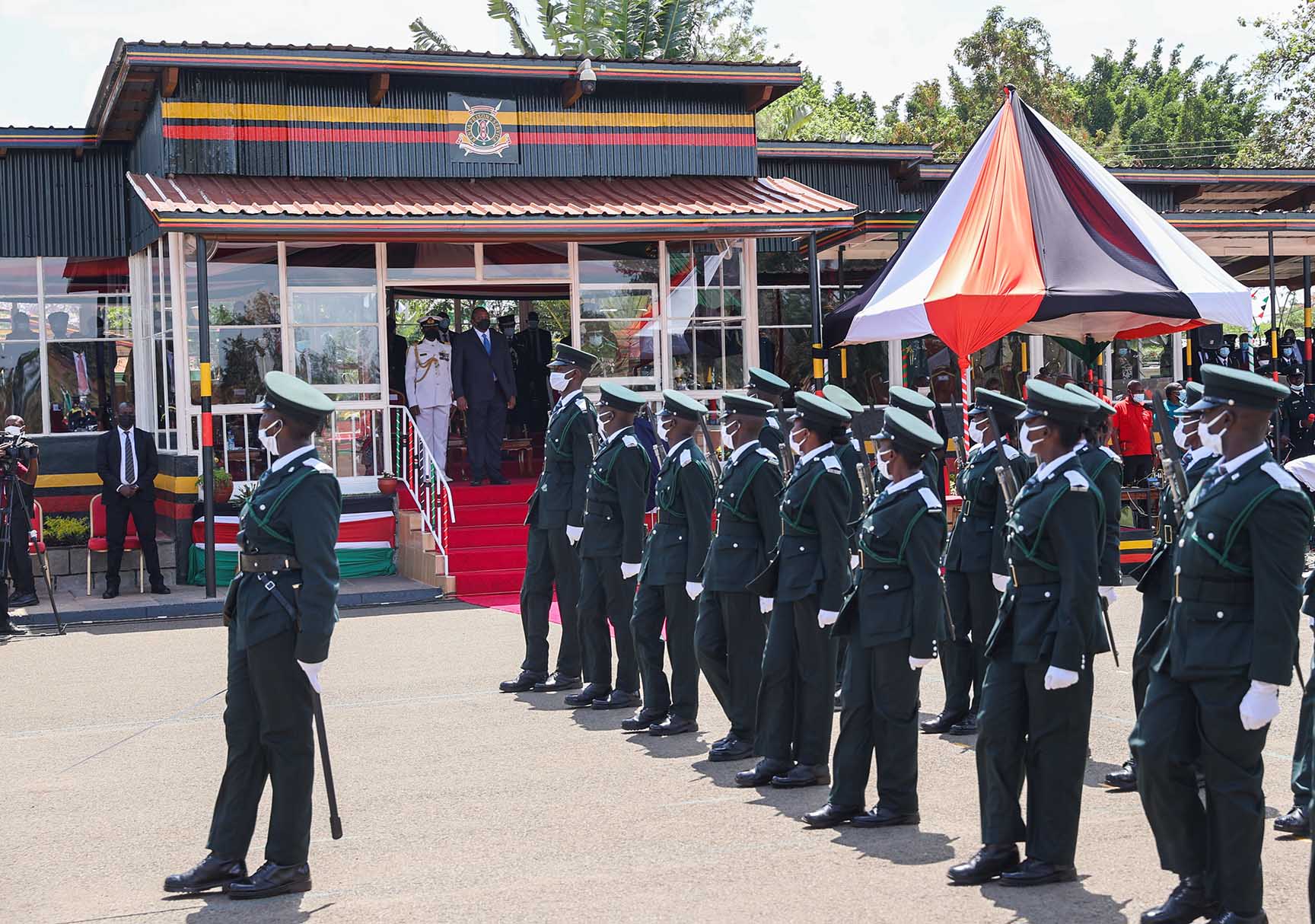 In food security, the President said Kenya Prisons Service (KPS) had put 1,400 acres of its land under commercial maize cultivation and was in the process of setting up a 30 tons per day flour mill at Naivasha Prison.

He added that the correctional institution’s Mwea farm was being expanded to 200 acres as part of ongoing transformation into a model rice production entity.

“Farm machinery for production has been acquired, a modern rice store and mill house have been constructed while the procurement of a modern rice mill is ongoing.

The Head of State spoke on Friday at the Prisons Staff Training College (PSTC) in Ruiru, Kiambu County where he presided over the passing-out-parade of Prisons Cadet Officers.

The President noted that KPS had made strides in livestock production by introducing pedigree dairy cattle at its Ngeria and Shikusa farms, while improving the Boran beef herd at Kamiti Prison farm.

On the manufacturing pillar, President Kenyatta commended KPS for putting up a water bottling plant that will enable Government agencies to procure drinking water at lower cost and save taxpayer’s money.

He noted that KPS workshops have been revamped so as to continue training prisoners in various industrial craft and vocations, a critical aspect of the rehabilitation, reintegration and reduction of the tendency of convicted criminals to slide back into crime after serving their terms.

“The above examples demonstrate that even though the offenders are within correctional facilities, they are not excluded from personal development and making valuable contributions to building the nation and achieving our shared aspirations,” President Kenyatta said.

He said the Government is also implementing reforms to boost the welfare of KPS officers.

“I am pleased to state that we have made significant progress in uplifting the benefits and standards of living of our officers and their dependents.

“We have revamped accommodation facilities, introduced comprehensive healthcare and implemented continuous professional development that ensures that officers can upskill and improve themselves,” the President said.

At the same time, the Head of State directed the Ministry of Interior in consultation with stakeholders to develop a policy to safeguard the health and education of the children of incarcerated parents.

“During this period of their development, children need stable, safe, secure, stimulating and nurturing environments to enable them grow optimally and achieve their developmental potential regardless of the crimes committed by their parents,” the President said.

Noting that KPS had attained a Covid-19 vaccination average of 90 percent for inmates and over 80 percent for uniformed personnel, the President lifted the ban on visitation that had been imposed due to the pandemic.

“This critical mass can sufficiently provide herd immunity within the Kenya Prison Service fraternity; and is the basis upon which we will anchor the decision to review the moratorium on visitation of inmates imposed at the onset of Covid-19 pandemic,” the President said.

Besides presiding over the cadet officers pass-out-parade at the Kenya Prisons Staff Training College in Ruiru, the Head of State inaugurated the institution’s 10,000 litre per day capacity water bottling plant and commissioned the construction of the Kenya Prisons Service Referral Hospital.

In his remarks, Interior CS Dr Fred Matiang’i thanked President Kenyatta for steering initiatives that have transformed KPS, and that his ministry will remain focused on supporting the President’s vision for the benefit of all Kenyans.