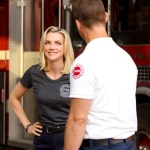 Matthew Casey bid farewell to Chicago Fire for a very emotional reason during the October 20 episode of the show, which happened to be the firefighter drama’s 200th episode. Casey decides to leave Chicago and move to Oregon to take care of the Darden boys, the sons of his late friend Andy. Jesse Spencer has been the leader of Chicago Fire since day one and explained why he decided to leave in season 10.

“I think over the years I realized I’ve been doing TV for a long time,” Jesse told reporters, including HollywoodLife, during a press conference. “I added it up and I think this year is my 18th year of television straight. I went straight from House into Chicago Fire. We were coming up to the 200th episode, so I called Derek on making a personal decision. I called Derek and broke the news that I thought it was time to leave the show, and he agreed that we should at least get Casey to 200 episodes. It was a difficult decision because I’ve loved the show from the start, but there’s other things that I would like to do in the future and some family that I need to take care of. And 18 years is a long time. That’s a long stretch.”

He added, “I was marking off these milestones and looking to the future, and I called Derek [Haas] and, well, Derek didn’t want me to leave but we both agreed that if it was time for me, then it was time. It was a difficult decision that night, and I hate to leave the show because I do love this show, but when the time comes the time comes.”

Derek, who is Chicago Fire’s creator and showrunner, said that “anything past the first 13 episodes was a bonus.” He admitted that he felt like they’d been on “borrowed time for a long time. Of course, I want to talk Jesse into staying and coming back and doing all the things as long as we could, but I was very happy that he gave us 5 more episodes than just saying at the end of the season, which happens sometimes, too. That let us bring back a storyline from season 1, which I know Jessie was excited about when we pitched it to him, to bring back the Darden boys and really tie in the pilot to Jesse leaving.”

In the very first episode of the series, Casey’s longtime friend Andrew Darden was killed in the line of duty. He left behind his two young boys, Griffin and Ben. In the present day, Casey is moving to Oregon for at least 3 years to prevent the boys from going into foster care. Derek noted that “part of conceiving the storyline was to make it to where everyone understood why he was doing what he was doing so that you didn’t have to have this sort of haunted presence.”