NEW YORK, USA, 11th October 2021, (PSCU)—President Uhuru Kenyatta on Monday witnessed the signing of a detailed private sector agreement that seeks to expand trade and investments between Kenya and the United States of America. 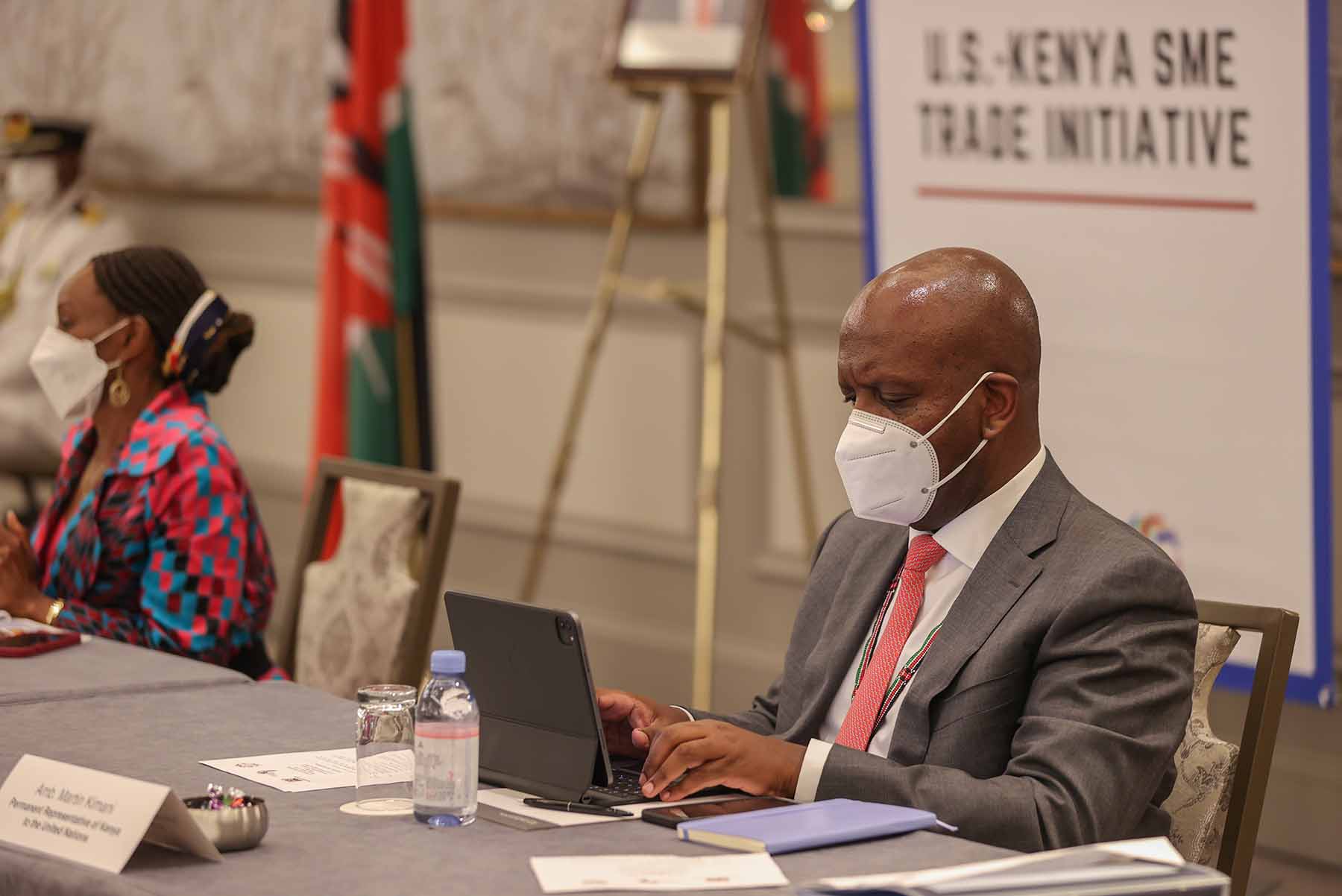 Kenya’s Permanent Representative to the UN Amb Martin Kimani during the signing of a Kenya-US private sector trade agreement in New York, USA.

The agreement, signed between Kenya Private Sector Alliance (KEPSA) and Corporate Council on Africa (CCA), provides a framework for Kenyan and American businesses, especially the small and medium enterprises (SMEs) to partner through information sharing, training, logistics, and financing. 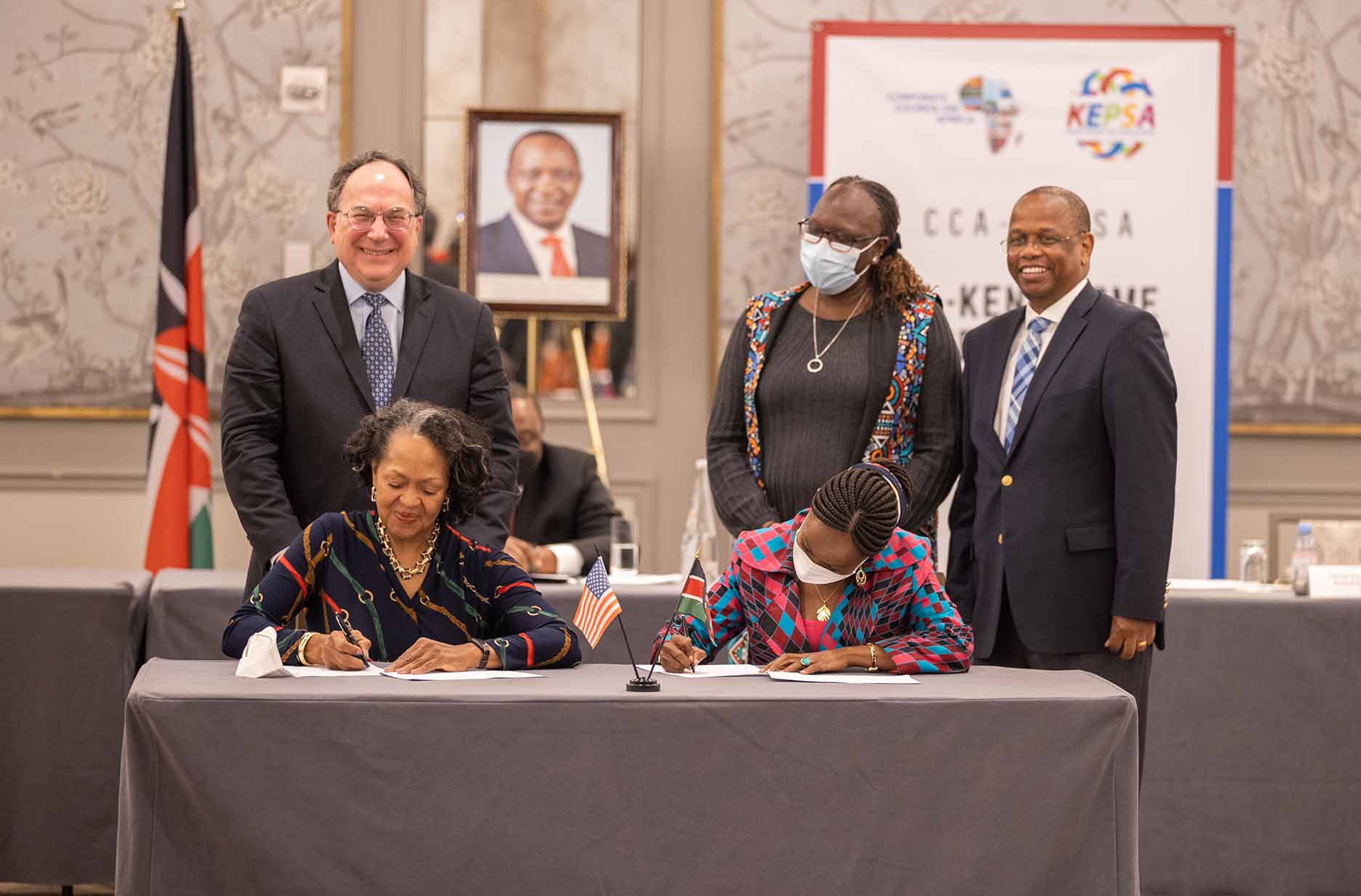 President Uhuru Kenyatta witnesses the signing of a private sector agreement between Kenya and the United States of America in New York. The agreement was signed by Carole Kariuki, CEO of KEPSA (L) and Florie Liser, Corporate Council on Africa.

Established in 1993, CCA is the largest umbrella body of American companies operating in Africa with an overarching objective of promoting trade and investments between the US and the African continent. 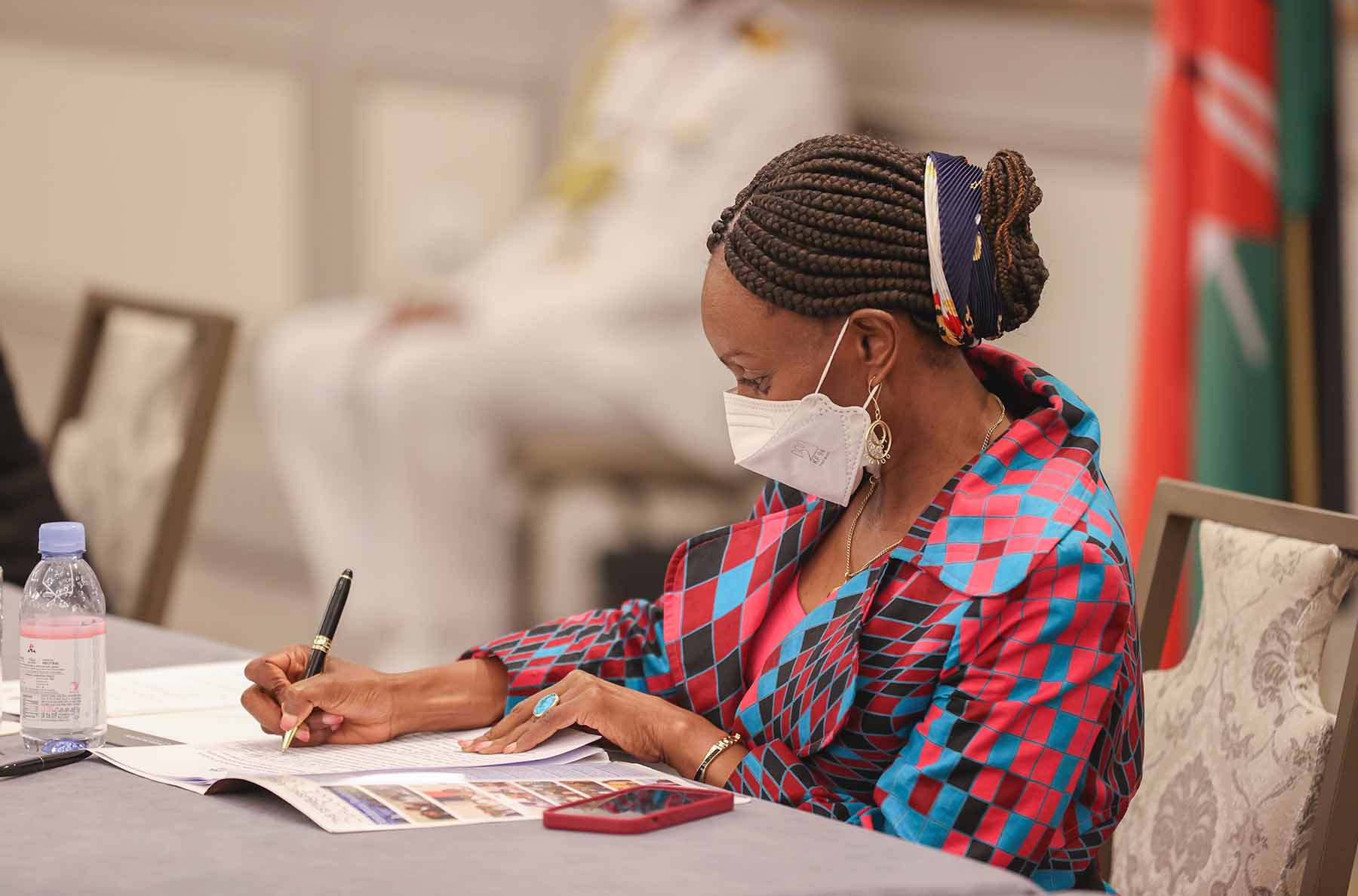 Speaking at the signing ceremony in New York, on the first day of his two-day official visit to the US, the President said the Government backed pact was part of efforts to support the growth of Kenyan SME sector as a key enabler of wealth and employment creation. 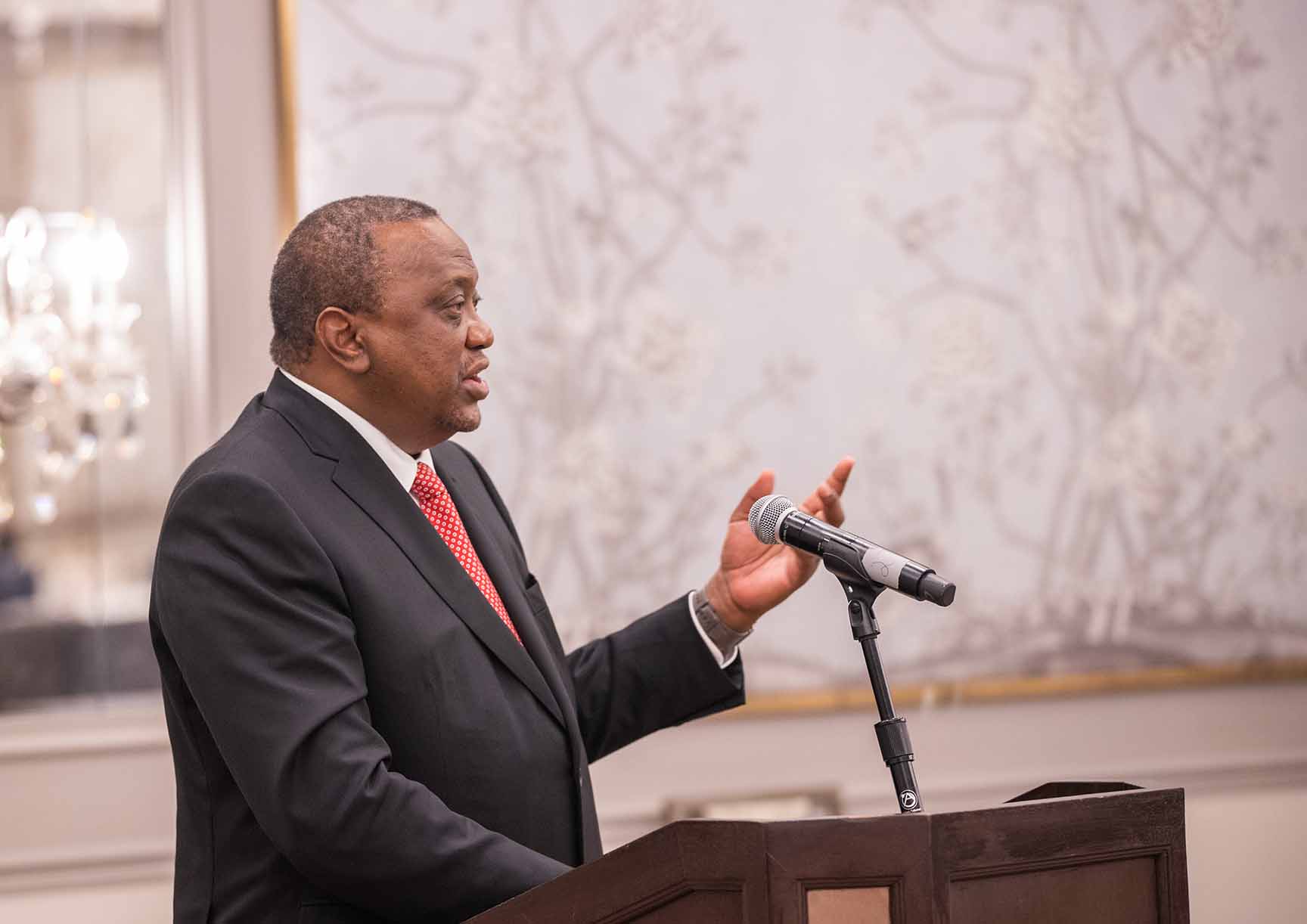 President Uhuru Kenyatta gives his remarks when he witnessed the signing of a Kenya-US private sector trade agreement in New York, USA.

He noted that the agreement will create new opportunities for Kenyan SMEs saying the sector plays a key role of guaranteeing the country’s economic resilience especially in times of turbulence. 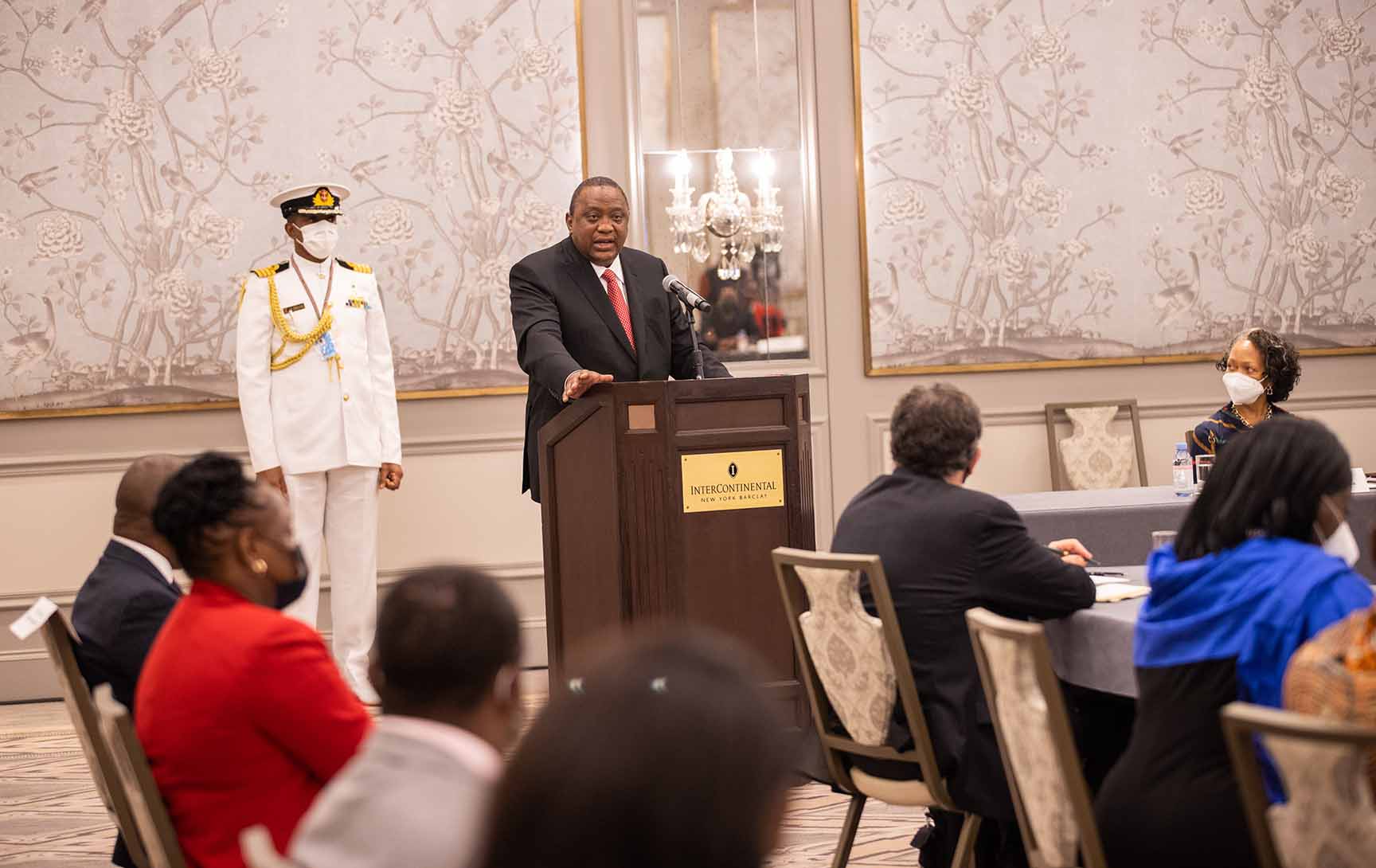 President Uhuru Kenyatta gives his remarks when he witnessed the signing of a Kenya-US private sector trade agreement in New York, USA.

“I have always had the opportunity of saying that Kenya is a country that people always wonder where the resilience of our economy comes from. A country where despite a myriad of shocks, occasioned over the years, always prove to be very resilient. 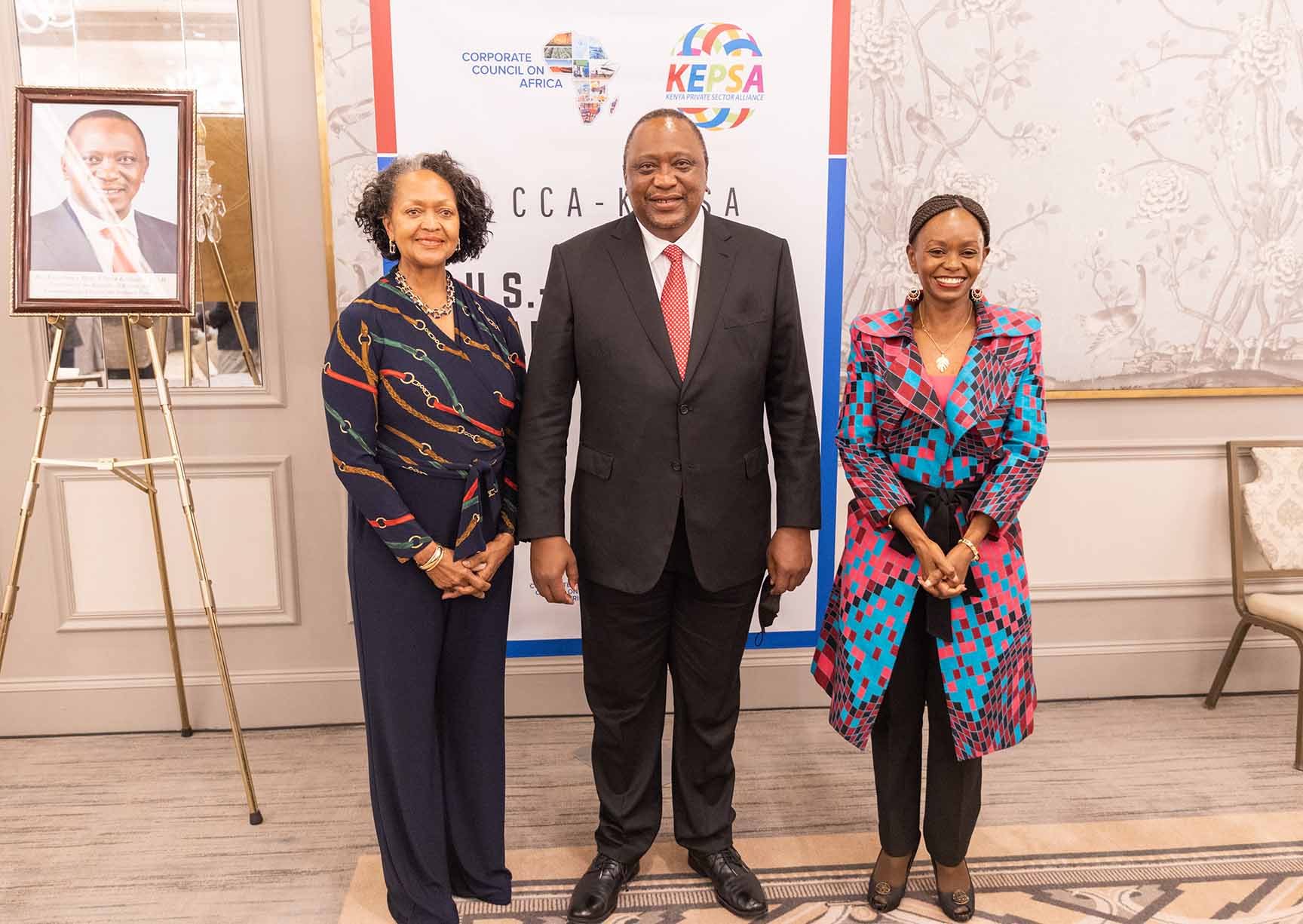 President Kenyatta noted that both Kenyan and US economies are largely driven by SMEs saying that the agreement would help accelerate Kenya’s economic recovery efforts from the ravages of the Covid-19 pandemic.

“As we look into the future, the future where we are all focused on recovering, it will be this sector that once again will be the foundation of recovery that we all seek to see in the months and years ahead of us,” the President said.

He thanked CCA for its commitment to the strengthening of African-American economic ties saying the improving trade and investment relations between the US and Kenya was largely due to the organization’s good work.

Once again, the President assured of his administration’s support in the implementation of the trade pact saying its success is the success of Kenyans, the Government and the country at large.

At the same time, President Kenyatta challenged the American Government to be a reliable and predictable trading partner for the initiative to succeed.

“Reliability and predictability in a partner is something that is critical. To our American friends, I would like to say that you know you cannot start and stop a discussion with partners on the basis of one administration after another. Relationships are between countries and people not between administrations.

“There is need to understand that if really we want to establish a base to be respected and to be known as a reliable partner, you cannot stop and start every five years. People don’t know about Democrats and Republicans, they know and understand the United States of America.

“We also change Government, laws and democracies, but we stand by our word. If one Government has committed, another Government completes, I believe you too need to do the same,” the President said, adding that the US needs to focus on long-term engagements and commitments with African countries.

KEPSA CEO Carole Kariuki said her organization’s singular focus was to ensure Kenyan SMEs tap into and benefit from the expansive and lucrative American market by leveraging on the networks and expertise provided by its trade and investment pact with CCA.

“Our focus right now is to scale up the SMEs so that we really can move into development. We want to connect them with the stores in the US and help them access the market. Many of the SMEs do not know how to access AGOA (African Growth and Opportunity Act)-the training, the logistics, the financing and that is what we want to do,” Ms Kariuki said.

On her part, the CEO of CCA Florie Liser commended President Kenyatta for creating a conducive business environment for local and foreign investments to thrive by championing progressive policies and setting up the enabling infrastructure.