The Netherlands moved to the cusp of securing a place at the 2022 FIFA World Cup after routing Gibraltar 6-0 in Rotterdam.

Virgil van Dijk, Memphis Depay (2), Denzel Dumfries, Arnaut Danjuma and Donyell Malen were all on target for the Oranje. That has given returning manager Louis van Gaal a fourth win in as many games.

Los Llanis, ranked 197 in the world, were generally impressive in defence, but couldn’t keep up with the Netherlands’ quality. A ninth-minute opener from Van Dijk was followed by a brace from Depay. That virtually ended the match as a contest as the hosts went into the break with a commanding 3-0 advantage.

Dumfries, Danjuma and Malen then joined the party after the break to add more gloss to the scoreline. In the process, the Netherlands consolidated their position atop the Group G table with 19 points from eight games. 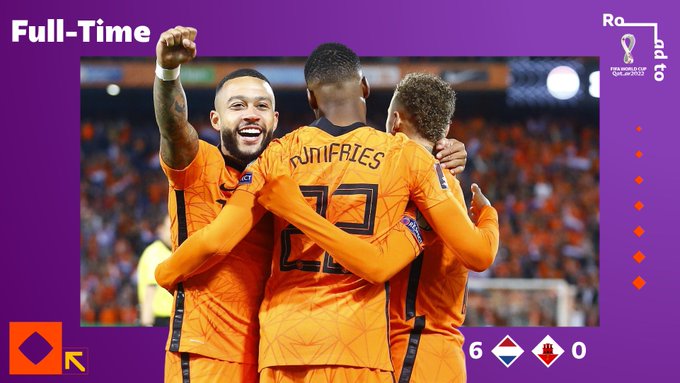 After failing to qualify for the 2018 FIFA World Cup in Russia, the two-time finalists look poised to make a return to the quadrennial competition. On that note, here are the five major talking points from the game:

Memphis Depay was involved in four of the Netherlands’ six goals on the night. But most of his work came during a pulsating opening half that also saw the Barcelona striker miss a penalty.

Depay started off with a fine assist for Van Dijk off a corner before getting on the scoresheet. He then had the chance to double his account from the spot after Graeme Torilla’s handball had blocked De Vrij’s header.

However, Gibraltar goalkeeper Bradley Banda guessed the right way to keep out Depay’s effort from the spot. The 27-year-old soon atoned for his miss with a successful attempt from 12 yards.

🔥 @Memphis has registered 15 combined goals and assists in European qualifying for the 2022 #WorldCup. No other player has reached double figures 🤯 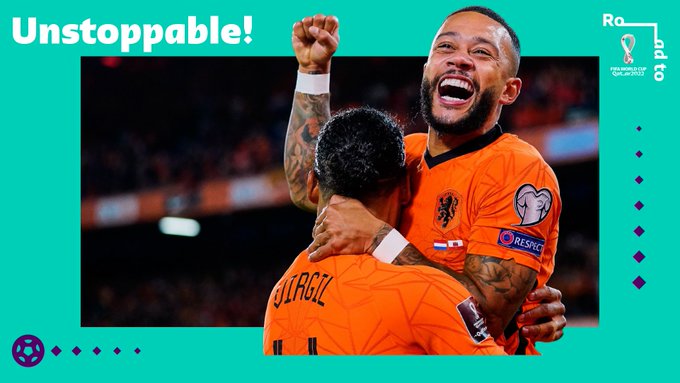 Within the opening 45 minutes itself, the prolific marksman registered two goals and an assist, continuing his imperious form in the qualifiers.

Yet, those impressive numbers notwithstanding, Depay went on to create another goal after the break. He set up Malen for the Netherlands’ sixth of the night with an impeccable, defence-splitting through-ball. It was truly a night to remember for the in-form striker.

#4 Gibraltar were defensively resilient despite the rout

The scoreline was so lopsided that anyone who didn’t watch the game would think the Netherlands had a cruise. While that wasn’t entirely untrue, that wouldn’t have reflected Gibraltar’s resilient defence.

The visitors displayed excellent man-marking from open play. They had as many as seven or eight black shirts in and around the penalty area whenever the Netherlands looked to build attacks.

They were obviously let down by two contentious handballs, which gave the home side as many penalties. But one of them was kept out by their debutant goalkeeper Bradley Banda.

Following Dumfries’ goal early into the second half, the match was long over as a contest. But Los Llanis kept their defensive shape till two late Netherlands goals opened them up once more.