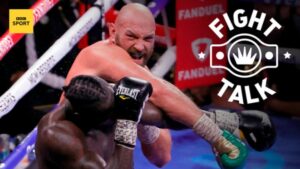 Featured Photo Caption:Fury knocked Wilder down for a third time to win the fight in the 11th round Photo by Getty Images.

Britain’s Tyson Fury crowned himself the “greatest heavyweight of my era” after retaining his WBC crown in a classic fight with Deontay Wilder.

The 33-year-old stopped Wilder in the 11th round after twice being knocked down himself in a thrilling third meeting between the pair.

It followed a heated build-up during fight week as both fighters goaded one another in a vicious war of words.

“I have proved time and again that I can never be written off,” said Fury.

“I didn’t have my best performance but I pulled it out of the bag when it needed to be done.

“I am the greatest heavyweight champion of my era, without a doubt. Number one. If you play with fire long enough you will get burned.”

The first fight in 2018 finished in a controversial draw, before the unbeaten Fury won their second outing with a seventh-round stoppage 20 months ago.

After inflicting just the second defeat of Wilder’s career on Saturday, Fury said the American did not want to engage with him afterwards and promptly left the arena.

“I went over and said well done and he said he didn’t want to show any sportsmanship or respect,” said Fury. “Very surprised by that. He’s an idiot.

“I pray for him. I am thankful that we all get out of the fight in one piece and get to go to our families.”

Wilder, who was taken to hospital as a precaution after the fight, confessed he “wasn’t good enough” on the night.

“I’m not sure what happened,” he added. “I know that in training he did certain things, and I also knew that he didn’t come in at 277lbs to be a ballet dancer.

“He came to lean on me, try to rough me up and he succeeded.”

Both fighters weighed in at the heaviest in their careers and, although Fury had 39lbs on his opponent, the Morecambe fighter said he believed Wilder, at 17st, was too heavy.

“It was a great fight,” said Fury. “I will not make any excuses. Wilder is a top fighter, he gave me a run for my money.

“I always say I am the best fighter in the world and he is the second best. Don’t ever doubt me. When the chips are down I can always deliver.”

Fury added: “Before I start thinking about fighting other men I will bask in this victory.

“This was one of my greatest wins. I got off the floor to do it. I am the big dog in the division.”

‘You need a good dance partner’

Fury leapt onto the ropes when Wilder went down in the 11th, knowing he had won the fight, and the British fighter sad he was “proud” of his performance.

“There were some shaky moments in there but I never lost faith,” he told BBC Sport.

“I continued on and persevered and got that single punch knockout. As soon as I landed it I jumped on the ropes. I knew he was not getting back up from that.

Boxing expert Steve Bunce added: “When he is determined, he is untouchable. When he went down in the fourth those were heavy knockdowns. His eyes were glazed in the fifth but he managed to turn it around. He is an extraordinary human.

“It was a rollercoaster and the reason it got to the 11th round was because of Wilder’s guts, heart and desire. He might not be everyone’s cup of tea but he is brave and he is fearless.”

Fury’s promoter Bob Arum has seen it all in his long career in boxing, but he described this fight as the best he has seen.

“I’ve been in this business 57 years promoting fights and I truly have to say I have never seen a heavyweight fight as magnificent as this,” he said.

“I am so proud of the man on my right. He’s showed heart, ability, he is truly a fighting man.”

Speaking on BBC Breakfast, Bunce added: “It is the best fight I have seen in the flesh and the best I have ever watched on film.

“I am not sure how to describe it. I was maybe five feet from the ring. I sat there with my jaw on my chin. Rocky is like the Teletubbies compared to what you witnessed tonight!”