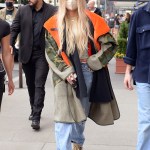 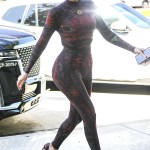 Khloe Kardashian and Kris Jenner were spotted walking outside in the Big Apple hours before Kim Kardashian takes on her hosting gig on the Oct. 9 episode of ‘Saturday Night Live.’

Khloe Kardashian, 37, and Kris Jenner, 65, recently made their way across the country to support Kim Kardashian, 40, and her highly-anticipated Saturday Night Live appearance. The Keeping Up with the Kardashians stars were photographed walking outside in New York City, where the comedy sketch show is filmed, just hours before Kim will make her hosting debut in the Oct. 9th episode. Khloe wore a fashionable olive green and orange jacket over a black top and jeans during the outing while her look-alike mom wore a black coat and black pants.

The duo linked arms while they walked by onlookers and both wore face masks to protect themselves and others from the COVID-19 pandemic. Khloe’s long blonde locks were down while Kris showed off her signature short dark locks and they both added sunglasses to their looks. 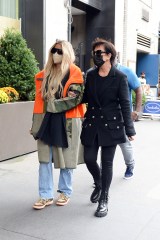 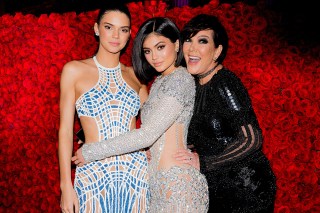 Although Kim wasn’t with them during the Big Apple outing, it’s not too surprising considering she’s been in the city all week to prepare for the upcoming show. She is set to be the host of the 47th season‘s second episode while Halsey‘s the musical guest. It’s not clear what her monologue will be about but considering past guests have often poked fun at their own lives in them, many are wondering if the mother-of-four will address her split from Kanye West, 44.

Either way, it’s sure to be a success since so many fans have been waiting for the big day ever since it was announced. Kim took to Instagram yesterday to share two promo videos for the show and they made her followers chuckle. In the clips, which also featured Halsey and SNL cast member Cicely Strong, Kim introduces herself and after Cicely asks her if she’s nervous to do “sketch comedy” she goes on to asks questions like, “Why I don’t have to write sketches, do I?” and “Memorize lines?” After Cicely and Halsey both assure her she doesn’t, she cheekily says it will be “easy.”

Kim’s episode of SNL will air live on NBC on Oct. 9. We’ll be sure to be on the lookout to see if Khloe and/or Kris make an appearance!