Jack Ma is reportedly stepping down as the president of an elite business school he founded, suggesting a further retreat from public life by China’s most prominent entrepreneur in the face of government pressure on the tech industry.

Citing anonymous sources, the Financial Times reported Monday that Ma will no longer serve as the president of Hupan, which he created in 2015 with the vision of turning it into a “300-year enterprise” that would become a worldwide name for entrepreneurial education.The newspaper also reported that Hupan would restructure its education program. The Hangzhou-based schoolhad already dropped the word “university” from its name, following a government clapdown on institutions that are not licensed as universities but were claiming the status. The Financial Times, citing a person close to the school, reported that Ma would not hold “any high level official title” at the organization after it was restructured. The newspaper added that several people said Ma wanted to remain connected to the school, though, and may give lectures there.Hupan and Ma’s personal foundation did not respond to requestsfor comment from CNN Business.The report comes several months after Beijing began reining in the Chinese internet sector. Ma himself has been at the center of those efforts — regulators pulled a highly anticipated IPO for his company Ant Group, the financial affiliate of Alibaba (BABA), last year after he criticized the country’s financial regulators and state-controlled banks. Since then, Ant Group has been forced to overhaul its opeations , and Alibaba and other tech firms have been investigated over concerns about monopolistic behavior and other consumer rights issues.Ma subsequently dropped out of public view for several months, canceling appearances at scheduled events. He’s not the only big tech executive to take a step back lately. ByteDance founder Zhang Yiming ,38, announced last week that he would resign as CEOand transition to a new role at the company to “focus on long-term strategy.” And in March, Colin Huang, the 41-year-old founder of Pinduoduo (PDD) also known as Huang Zheng, said he would step down as Chairman to pursue his childhood dream of becoming a scientist or researcher. 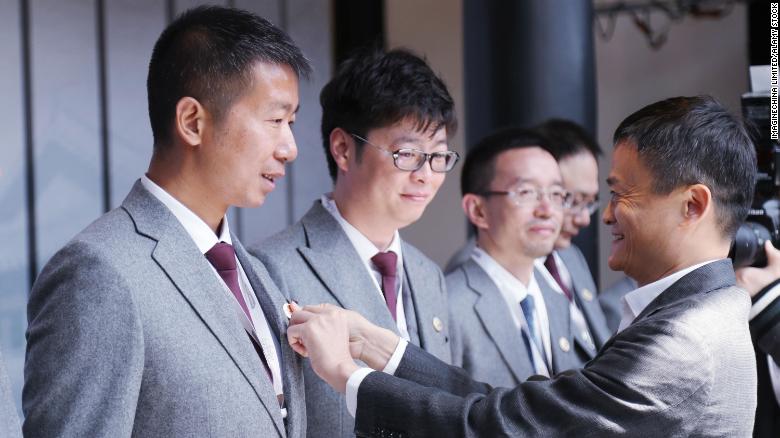 Jack Ma, founder of Chinese e-commerce giant Alibaba Group, puts a school badge on a student during the 3rd school opening ceremony at Hupan in 2017.Ma took the name Hupan, which means “lakeside,” from the apartment he lived in when he co-founded Alibaba in 1999.Lakeside Gardens is where the first 18 Alibaba employees worked together in the company’s early days.Ma has compared that experience to the Western practice of running a small business out of a garage.”Each company has its own ‘garage’ culture,” Ma told studentsat a 2016 ceremony at the school. “That’s why we named it Hupan University, to remember every entrepreneur. “The schoolwas also famously difficult to get into: Each applicant needed to have more than three years of entrepreneurial experience running a company with a minimum annual revenue of 30 million yuan ($4.7 million) and 30 employees. Even qualified candidateshad to go through strict interviews. Its admission rate is a lowly 2.2%, making it more difficult to get into than Harvard and Stanford.Alumni include many notable Chinese entrepreneurs, such as Didi Chuxing’s president Jean Liu (or Liu Qing), Li Auto founder Li Xiang, and Uxin Group founder Dai Kun. But the political winds have shifted against Ma and his work. Along with the scrutiny on Alibaba and Ant Group, the Financial Times reported in April that Hupan was forced to suspend new enrollments.

Some online commentators have compared Hupan to the Donglin Academy, which is believed to have cultivated like-minded scholars and officials in the 17th century, who went on to form a famous and powerful political faction — Donglin. Such thinkers amassed influence, leading to years of intense factional battles for power within the empire, and the fighting is believed to have eventually led to the Ming dynasty’s collapse. The Financial Times reported, citing a person close to the school, that authorities were worried that Ma was building a network that “could be at odds with the [ruling Chinese] Communist party’s objectives.”