Netherlands manager Louis van Gaal has responded to criticism from Angel Di Maria by pointing to his extremely friendly relationship with Memphis Depay. “Memphis Depay also played for Manchester United, and now we kiss each other mouth to mouth,” said van Gaal, in an unusual attempt to prove that time heals all wounds. 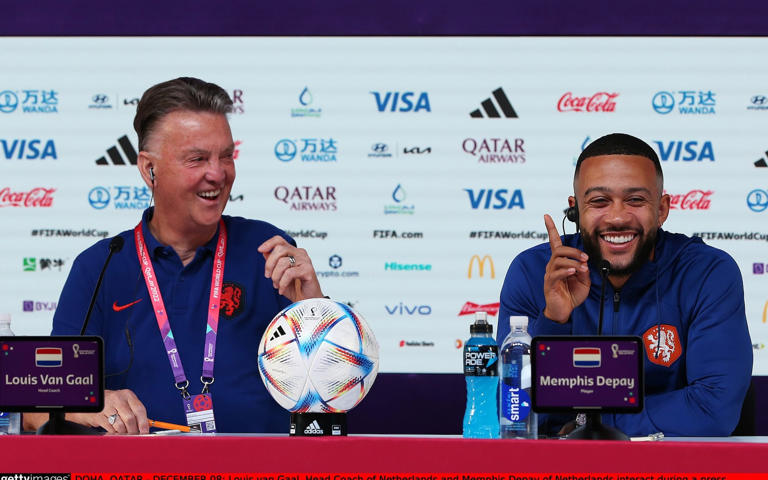 Depay, alongside van Gaal as the Netherlands prepare for their quarter final against Di Maria’s Argentina, laughed and shook his finger in disagreement.

Van Gaal brought Depay to United in 2015 but he left two years later, having fallen out of favour. Earlier this week Di Maria described Van Gaal as the worst manager of his career. “He is one of the very few players who said that, and usually it’s the other way around,” said Van Gaal. “It’s sad, I don’t like it that Angel’s said that, it’s a pity, unfortunate, but that’s just the way it is.”

One of the more engaging World Cup subplots has been van Gaal evidently caring even less about risqué public statements than in his entertaining spell as manager of United. Entertaining off the pitch, at least. Once again it is his style of football which is irking a critical Dutch press.

Asked if he was happier with the more prosaic football at this tournament compared to his freewheeling early days, Van Gaal said “You keep asking me the same question time and time again but you do not understand that football is evolving and it is much more difficult to play as offensively as Ajax did 20 years ago.

“In 2014 I started developing a more defensive system, now half the world is playing that style of football. One could believe that we only defend, but that’s not true, we are trying to press and push in a varied way.”

Depay will have to be at his best to broach an Argentina defence which has only conceded once since defeat to Saudi Arabia in their opening game, but is enjoying his part in what Van Gaal expects to be his swansong. “I think our head coach sometimes shows character, a sense of humour and everyone appreciates that,” Depay said.

“For us he is a strong and marvellous head coach. I personally haven’t asked what he’s going to do after the World Cup, but all of us want to give him a wonderful tournament.”

When is Netherlands vs Argentina?

The Netherlands vs Argentina match will be the second of the four quarter-finals to be played over two days and takes place on Friday, December 9.

What time is kick-off?

What TV channel is it on?

The match will be broadcasted on BBC One and the BBC iPlayer.

Telegraph Sport will also be running a live blog on the game – you can bookmark this page now and return on Friday to follow along with our coverage.

How have Netherlands fared so far?

They qualified from Group A at the top of the table having taken seven points from 2-0 victories over Senegal and Qatar that bookended a 1-1 draw with Ecuador. That middle match provoked a great deal of criticism for Van Gaal and his tactics, uniting the Total Football 4-3-3 purists against his pragmatic uses of a back three. Cody Gakpo scored in each of the group games but their best attacker, Depay, was sluggish on return from long-term injury. Gratifyingly for Van Gaal, Depay seemed to be approaching peak form and fitness during that last 16 victory over USA, scoring a memorable goal to sweep the Dutch into the lead.

What are Netherlands saying?

After the victory Dumfries, whose parents named him after American actor Denzel Washington, said: “The aim of the match was to win and I’m happy I was able to help the team.”

“I was pleased for Daley [Blind] too. If I’m honest we’ve had some criticism recently. And I think it’s a good boost for both of us that we were important tonight for the group.”

Captain Virgil Van Dijk also said the Dutch still have some improvements to make if they are to have a chance of finally landing a World Cup.

“Yeah it was better, but we’re critical,” he said. “I think everyone in the Netherlands is critical. But we’re in the quarter-final. I think we have two days extra now to recover, so that helps.”

How have Argentina got on so far?

A slow start after that defeat by Saudi Arabia has led to improvement with every game, finding more fluency and support for Messi in victories over Mexico and Poland that sent them through to the last 16 at the top of Group B. After opening the scoring against Australia Messi now has three goals from his four appearances, matching Gakpo.

The two teams have played each other five times at the World Cup – with two wins for the Dutch, two for Argentina (one of them by virtue of a penalty shootout) and a draw. The two first met at the group stage in 1974 at the apogee of ‘Brilliant Oranje’ when Rinus Michels’ side won 4-0. Four years later Argentina had their revenge on home soil by beating Netherlands 3-1 in the final. They did not meet again for 20 years, when Dennis Bergkamp settled the quarter-final with a sublime 90th-minute winner. A hard-fought, goalless draw in 2006 helped both sides through to the last 16 and eight years later they faced each other in the semi-final which ended 0-0 after 120 minutes. Sergio Romero saved spot-kicks from Ron Vlaar and Wesley Sneijder in the shootout to send Argentina through to their fifth final.

What is Netherlands’ World Cup record?

No country have punched above their weight as consistently as Netherlands, making the final in 1974, 1978 and 2010 and falling at the semi-final stage in 1998 and 2014. The hope of winning their first World Cup brought Van Gaal out of retirement for his third stint in charge of the national side.

What is Argentina’s World Cup record?

Argentina have won it twice, in 1978 and 1986, and have been runners-up three times: in the inaugural competition in 1930, again in 1990 and 2014. Daniel Passarella and Diego Maradona are the Argentinian captains to have lifted the trophy, something Messi is hoping to emulate as the pinnacle of a truly glorious career.