You drop Cristiano Ronaldo and the man you pick instead of him best not miss. Gonçalo Ramos is 21. He made his international debut last month. Before Tuesday he had only played 36 minutes of international football. And yet within 17 minutes he had already scored more World Cup knockout goals than Ronaldo; by midway through the second half he’d scored the first hat-trick of Qatar 2022. Fernando Santos could hardly have been more obviously vindicated. Ramos, emphatically, did not miss, setting up a quarter-final against Morocco. 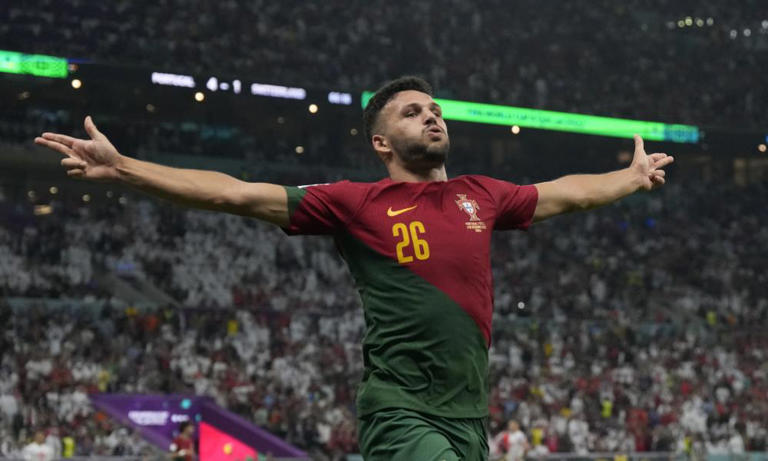 Santos has the rumpled air of a man who has slept in his car. He could be Elliott Gould playing Columbo. He is not a man who has ever willingly done anything interesting, so when the day before the game he had criticised Ronaldo for his shushing gesture after being substituted against South Korea, it felt significant. Ronaldo himself claimed it was directed at the South Korean forward Cho Gue-sung, who was trying to chivvy him off the pitch but, given similar situations at Manchester United, the widespread assumption in Portugal seems to be that it was aimed at his critics, of whom there are a growing number. A poll in the sports daily A Bola suggested 70% of readers thought he should not start against the Swiss.

It was 6,747 days since Portugal last started a live tournament match without Ronaldo, against Russia at Euro 2004. But age, it feels, has caught up with him very quickly of late. Ramos hadn’t quite turned three when that Russia game was played. Ronaldo inevitably draws the attention, the mass of his celebrity so great that everything else is drawn into his orbit. But Rúben Neves and João Cancelo were also left out having played in every group game, which perhaps hinted that Santos had recognised that Portugal had not played especially well, despite sealing qualification by winning their first two games.

This was far better. As United have found this season, teams function better without a black hole up front, dragging everything else into its overwhelming gravitational field. There was a lightness to Portugal, a sense of relief, of imagination. Ramos moved, and that allowed others to move off him. And that attacking midfield three of Portugal – Bruno Fernandes, Bernardo Silva and João Félix – is packed with creative talent just waiting to be unleashed.

Taking the handbrake off is not usually Santos’s style (perhaps he worries the car will roll away with him snoring on the back seat), but it worked. Switzerland, surprisingly starting with a back three, simply couldn’t cope. Fabian Schär, so improved for Newcastle this season, looked especially uncomfortable. Ramos turned him far too easily for the first and he was then emphatically beaten in the air by Pepe as he headed in a corner to make it 2-0 after 33 minutes, becoming the oldest man ever to score in a World Cup knockout game. His yellow card for a lunge on João Félix was indicative of his befuddlement and he was understandably withdrawn at half-time. 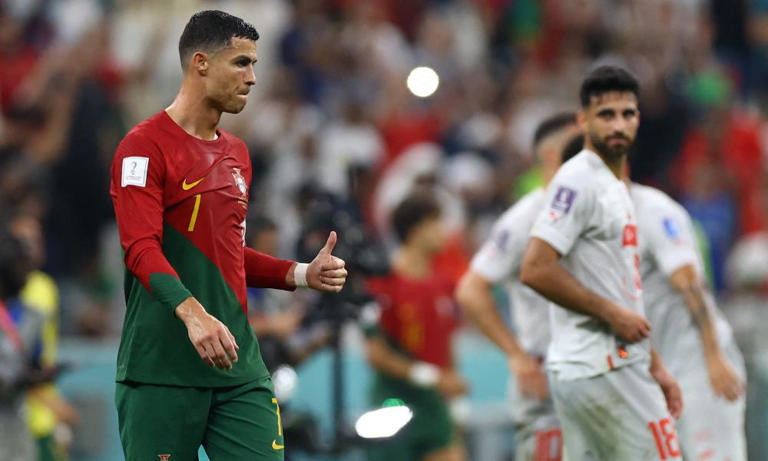 Santos darted across the near post to turn in Diogo Dalot’s low cross in via the undercarriage of Yann Sommer, laid on the fourth for Raphaël Guerreiro and then dinked a fifth as the Swiss defence fell apart. Rafael Leão floated in a brilliant sixth.Stop all the clocks: if you thought the Swiss could last forever, you were wrong. This was Portugal’s biggest ever win in a tournament knockout game, the first time they had won a World Cup knockout game by more than two since beating North Korea 5-3 in 1966.

It was all very incongruous for a Santos team, all the more so when Manuel Akanji bundled in a corner at the back post to make it 4-1 just before the hour. Santos immediately was out to the edge of his technical area, pointing and glaring. A lot of people were having far too much fun.

Ronaldo seemed genuinely enthused by it all, joining the celebratory huddle after Pepe’s goal, grinning broadly after Ramos’s second and standing and applauding the fourth. Every now and again the big screens in the four corners of the ground would flash up a picture of Ronaldo on the bench, drawing screams of excitement. It all seemed a little uncomfortable, especially when the crowd started singing his name and then booing when Santos, never the most instinctive people-pleaser refused to accede to their demands. Through it all, he sat impassive, chin propped on hand.

Then, just one more thing, as Ronaldo was brought on for Ramos to rapturous cheers. By then, though, the applause for every touch felt pitched somewhere between pity and a disturbing hero worship. Even Ronaldo gave a slightly embarrassed grin before thumping a free-kick into the wall in time-honoured style.

Perhaps there could yet be one great narrative crescendo in the Ronaldo-Lionel Messi saga with a Portugal v Argentina final. Such is Ronaldo’s sense of his own destiny that it’s entirely possible he could yet correct the climax of Euro 2016 when he was injured early and Portugal won without him, by coming off the bench to seal the glory. But right now, Portugal look an awful lot better without him.