Lionel Messi had a penalty saved but Argentina booked its ticket to the knockout phase of the 2022 World Cup with a 2-0 victory over Poland.

Álvarez’s sublime finish midway through the second half capped off a nail-biting evening for Argentina, who will now face Australia.

Poland advanced to the knockout stages by the skin of its teeth, qualifying on goal difference.

The other Group C game was a thrilling affair, Mexico beating Saudi Arabia 2-1, but the win wasn’t enough for the Central American team and Poland will now play France in a last-16 match on Sunday. 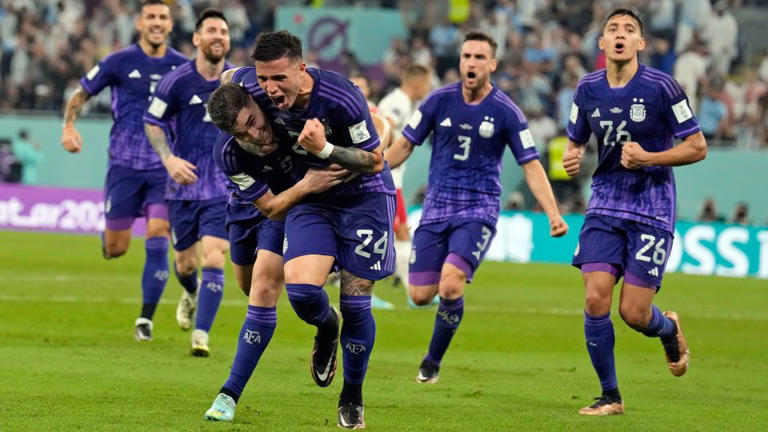 Álvarez is embraced by teammate Enzo Fernandez after scoring against Poland. – Natacha Pisarenko/AP

Not for the first time in his career, all the pressure laid firmly at Messi’s door, the 35-year-old endlessly striving to emerge from the long shadow which Diego Maradona has cast over the Argentina national side.

Playing in his 999th professional match, Messi looked up for the challenge, troubling Poland from the opening minute.

While the Polish attack offered very little throughout the game, Argentina cranked up the pressure – and both Messi and left-back Marcos Acuña coming close.

Argentina was offered a great chance to break the deadlock when the video assistant referee adjudged that Messi had been fouled by Wojciech Szczęsny when he was hit in the face by the Polish goalkeeper’s flailing hand.

However, Messi’s penalty was brilliantly saved by Szczęsny’s who somehow beat the ball away one-handed.

It was the crowning moment of a busy first half for Szczęsny, who finished the opening 45 minutes with nine saves to his name as Argentina piled on the pressure. 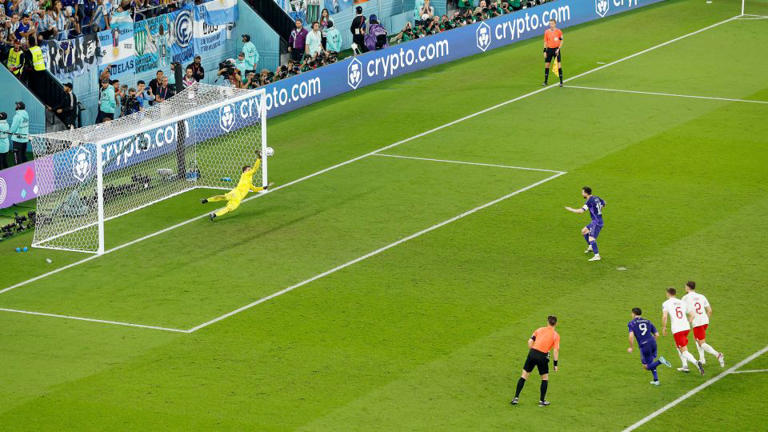 The penalty save was Szczęsny’s second of the tournament already and he became only the second goalkeeper since 1966 to save a penalty at the World Cup having conceding it himself, after Joel Bats for France against Brazil in 1986, according to Opta Stats.

It took just under 60 seconds for Argentina to break the deadlock after the break.

A cut back cross from right back Nahuel Molina fell to the feet of Mac Allister whose scuffed effort just managed to sneak past Szczęsny and send Stadium 974 into delirium.

It was Mac Allister’s first international goal, and continues his excellent year – he came to this World Cup as the top scorer for his Premier League club, Brighton and Hove Albion, this season.

That goal seemed to relax the Argentina players and fans inside the ground. Messi, Álvarez and Ángel Di María began to turn on the flair, toying with the Poland defense.

Midway through the second half, Álvarez showed why he’d been brought in for this game – he’d started the first two group games on the bench – curling home to get his first World Cup goal.

With Poland opening up at it attempted to claw itself back in the game, more spaces opened up for Argentina, with Messi, Álvarez and Lautaro Martínez all going close.

Group C’s conclusion must have been an agonizing watch for Poland’s fans.

For a brief period of time during the match, Poland and Mexico were tied on goal difference. That meant Poland was slated to advance via its better disciplinary record.

With Poland fans checking their phones furiously to keep tabs on proceedings and with all eyes on whether any Polish players picked up a yellow card, there was one last twist to Wednesday’s proceedings.

That was delivered by Salem Al Dawsari’s 95th-minute goal which gave Poland had a superior goal difference, assuring it’s progression to the next stage.