Manchester United prepare to take on Aston Villa in Thursday night’s Carabao Cup showdown as they aim to avoid a second defeat by the same opponent in a matter of days.

The Red Devils may have lost their way against the Villains on Sunday but ensured they did not repeat the same behavioural mistakes from recent games with Newcastle and Chelsea, for which they have been fined by the Football Association. Elsewhere, Erik ten Hag has been given the green light for a transfer – but only if he sells an unwanted flop first.

Mirror Football takes a look at all the latest stories coming out of Old Trafford.

Manchester United have been fined £82,000 by the Football Association for a breach of rules during their recent Premier League draws with Newcastle and Chelsea.

The Red Devils have admitted to failing to control their players in both matches. Against Newcastle on October 16, players surrounded the referee following a contentious moment between Callum Wilson and Lisandro Martinez.

Ten Hag’s players were guilty of similar behaviour in their 1-1 draw with Chelsea just six days later, with the referee once again being swarmed following the decision to award the hosts a penalty, conceded by Scott McTominay.

Read the story in full HERE . 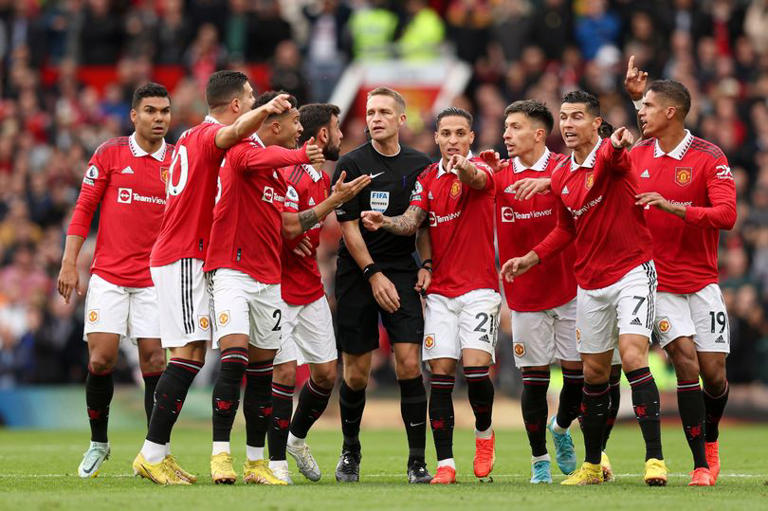 Should Man Utd have received a bigger fine than £82,000? Let us know your thoughts in the comments section below.

Ten Hag has been given the green light by Manchester United’s owners to complete a January swoop for a new right back – if he can offload £50million defender Aaron Wan-Bissaka.

The Red Devils have been operating with Diogo Dalot at right-back for the majority of the season, with Wan-Bissaka struggling to impress Ten Hag, while also spending a substantial amount of time on the sidelines through injury.

As a result, the Dutchman will be able to seal a deal for a new back-up for Dalot if he is able to flog the former Crystal Palace man, according to the Daily Telegraph, as he aims to provide competition for the Portuguese international for the remainder of the season.

Read the story in full HERE .

Liverpool legend Graeme Souness believes that Manchester United will miss out on the top four this season.

The Red Devils have already suffered defeats by Brighton, Brentford and Aston Villa, although seven victories from their first 13 games leaves them in fifth place, just three points outside the top four. However, Souness failed to name Ten Hag’s side in his final top-four standings.

“I think both of them will be in the top four,” Souness said on talkSPORT when asked where Liverpool and Tottenham would finish. “I think Chelsea are in jeopardy, a lot depends on what they do in the transfer window. Arsenal are looking convincing at the moment, they look like a really good team. So that’s my top-four prediction.”

Story by The Mirror,Tom Malley