Britain and the EU are not “worlds apart” over the Northern Ireland Protocol, Brussels said on Monday amid Tory MP fears that Rishi Sunak is softening to get a deal.

Maros Sefcovic, the EU’s negotiator, said he was  “convinced that where there’s a will, there’s a way” to cut border checks on British goods entering Northern Ireland.

“I believe that our respective positions are not worlds apart if we genuinely explore the EU’s robust proposals,” he told a meeting of UK and EU politicians in Westminster.

“I believe that it could be done and if there is political will, I’m sure that we can sort it out really within a couple of weeks,” he said before warning not all checks could be eliminated.

Mr Sefcovic gave no sign that Brussels was willing to bend on issues such as ending the jurisdiction of the European Court of Justice in Northern Ireland.

Mr Sunak, who has struggled to convince backbenchers of his Brexiteer credentials, on Monday met with Ursula von der Leyen, the president of the European Commission, at the COP climate summit in Egypt.

“They agreed on the importance of working together to agree a resolution [on the Protocol],” A Downing Street spokesperson said.

Mr Sefcovic warned the Prime Minister to drop threats to use the Northern Ireland Protocol Bill or risk a trade war with the EU during his speech in London.

“This is surely the moment to abandon recourse to unilateral action, such as the Northern Ireland Protocol Bill,”he said.

The Bill hands ministers the power to unilaterally tear up parts of the Protocol, which prevents a hard border on the island of Ireland by introducing one with Britain.

The Government has warned it will use the legislation, which Brussels says breaks international law, if negotiations over the Protocol fail.

Mr Sefcovic said making the Bill law could cost Northern Ireland its unique access to the EU’s Single Market, which is one of the benefits of the treaty, and damage trust. 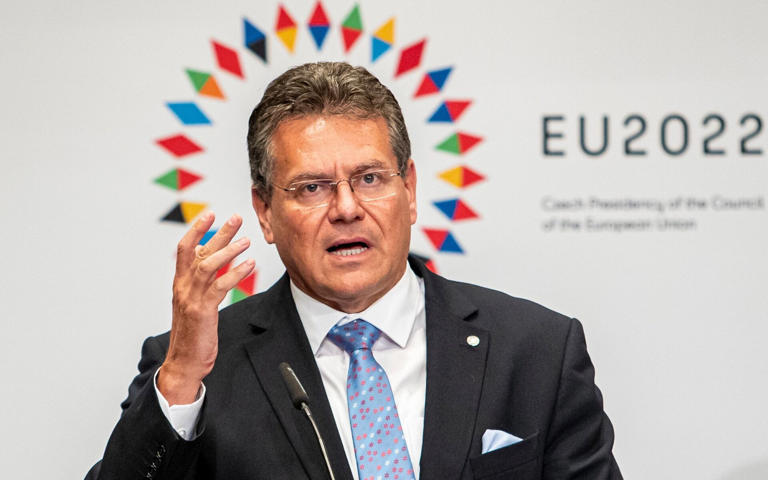 “Is the UK Government truly prepared to deprive Northern Ireland of this opportunity?,” Mr Sefcovic said, as he hailed the EU’s market “of 450 million consumers”.

“On top of it, unilaterally disapplying core parts of the Protocol would also have serious consequences for our trade relationship” he told the first meeting of the UK-EU Parliamentary Partnership Assembly in Britain.

Mr Sefcovic told Mr Sunak to ditch plans for a bonfire of EU regulations after Brexit or face new trade barriers to UK goods if the red tape was scrapped.

He warned it would pile “even more cost” on British businesses at a time of “severe economic strains” caused by soaring energy and food prices.

“More divergence will carry even more cost and will further deepen the barriers to trade between the EU and the UK,” he said.

Brexiteer MPs fear Sunak is softer on Brussels than Truss

His remarks come with Tory MPs fearful the Prime Minister is softening his pledge to review all 2,400 EU rules on the statute book.

Members of the European Research Group of Brexiteer MPs are already anxious that Mr Sunak is softer on Brussels than Liz Truss, his predecessor.

When he was chancellor, Mr Sunak argued in Cabinet against using Article 16 of the Protocol to suspend parts of the Brexit treaty.

He thought Britain could ill afford a trade war with its major trading partner when there was a cost of living crisis.

With confidence in the economy still reeling after the tanking of the pound, some ERG members fear Mr Sunak could cave on red lines such as the European Court of Justice.

A Protocol deal is also vital to convince the DUP to drop their boycott of Stormont and prevent fresh elections in Northern Ireland.

Members of Mr Sunak’s team have given assurances to concerned Brexiteers that the EU rules would be revoked and the Northern Ireland Protocol Bill passed.