As Manchester City fans changed the words to Glad All Over to fit the name of their manager, the man in question punched the air with each syllable. “We’ve got Guar-di-ola”. 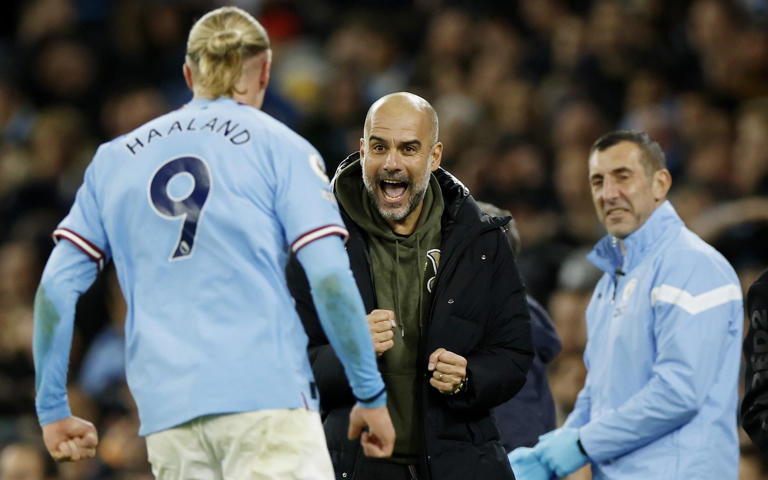 Pep Guardiola has eight months left on his contract but this did not look like someone looking to say goodbye. 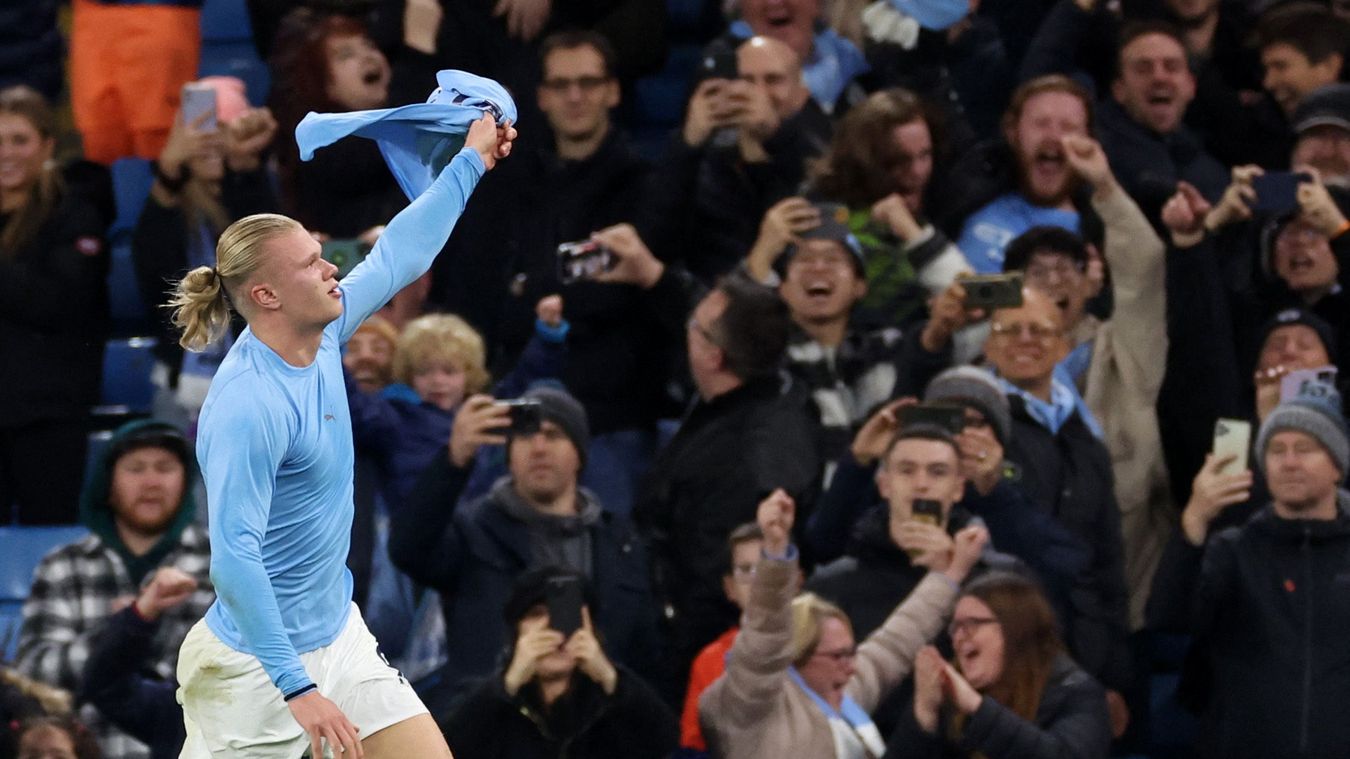 In fact, Guardiola spoke afterwards of his players keeping him refreshed in his seventh season at City, giving the clearest indication yet that he could be willing to stay beyond this campaign.

The World Cup will bring a mid-season managerial merry-go-round but Guardiola is also looking at a warm-weather break for his squad in Abu Dhabi where his future will inevitably be discussed with the club. Guardiola ordered his players to salute supporters after their last-gasp victory over Fulham. It felt like a big moment, winning in the 95th minute with 10 men after disputing Joao Cancelo’s red card and believing Andreas Pereira could be sent off for a foul on Rodri. Instead, Pereira converted the penalty that threatened a draw until Erling Haaland’s winner. 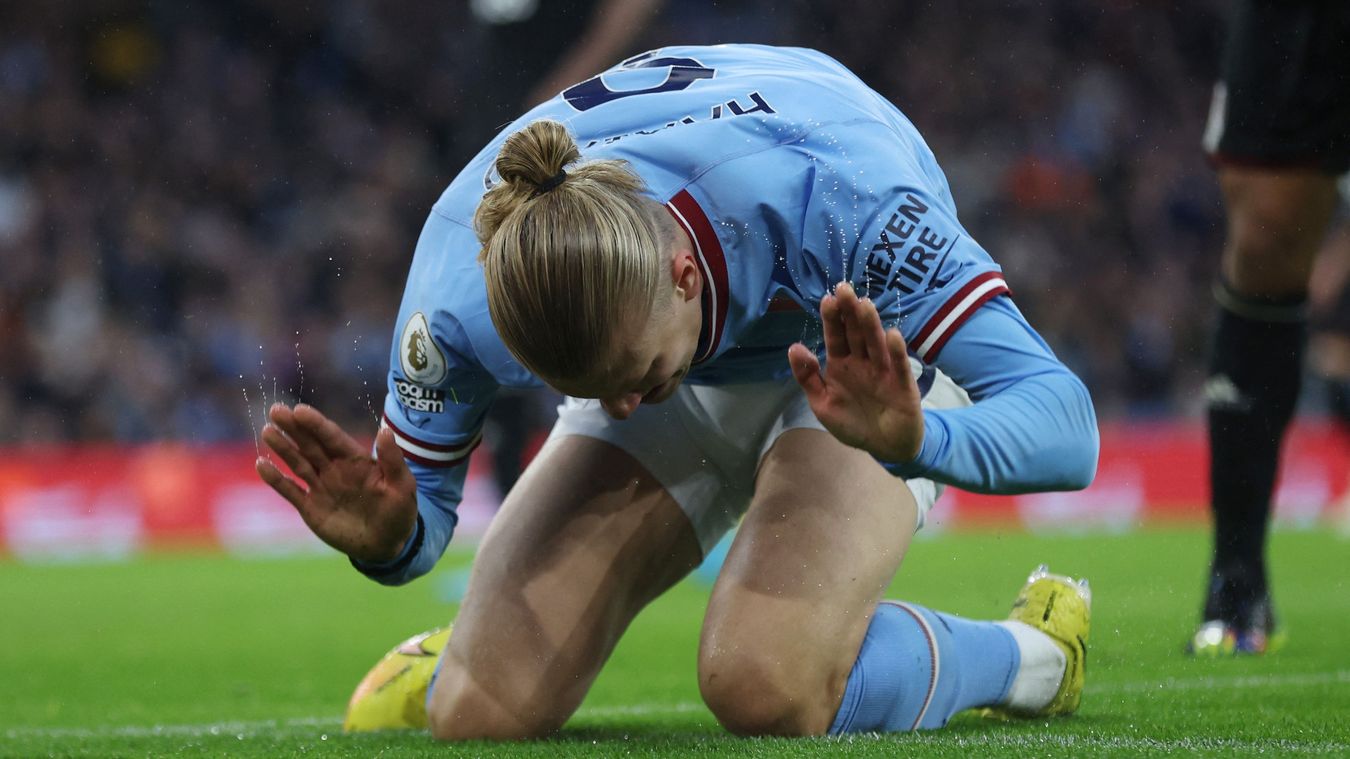 Kevin De Bruyne says his manager is calmer this season as he knows his players so well now, although there was nothing calm about the manic celebrations at the final whistle. 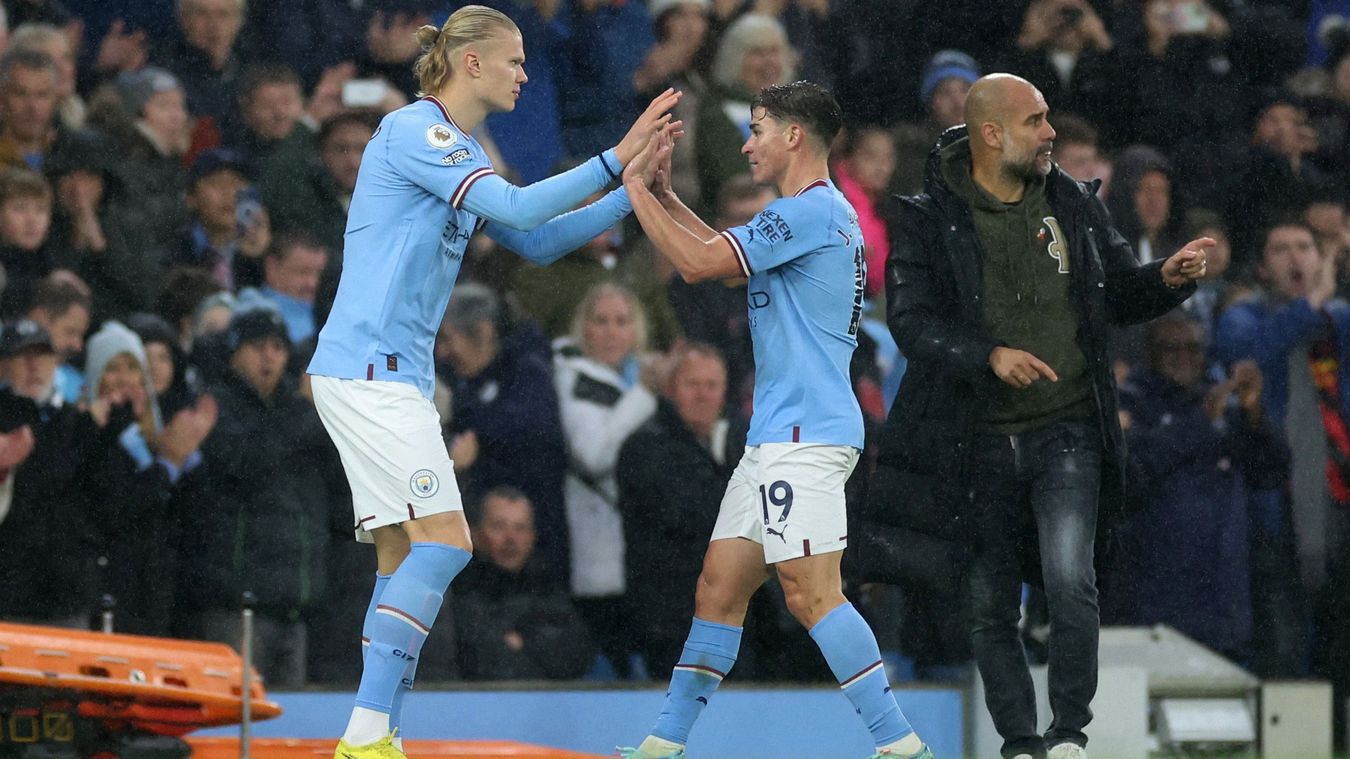 “I give the players enthusiasm but they give it to me, the way they play,” Guardiola said. “I see the faces of our people, they give me the energy for the future, for Chelsea and Brentford next. I cannot disappoint them, I have to be there with them. 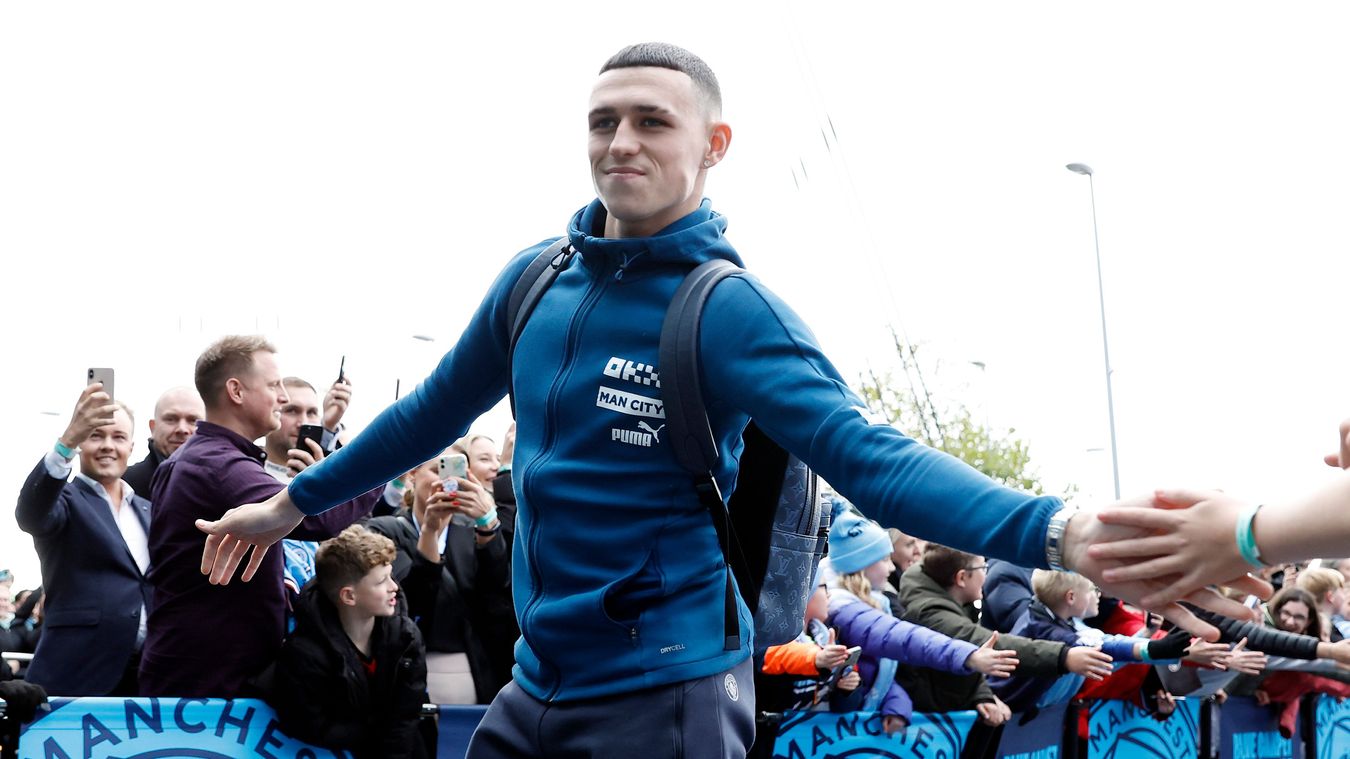 “Before the game they saw my enthusiasm, I said to them, this weekend is important, the contenders play each other, we can be at the top of the league or nearly there when it’s the World Cup.

“The target this season was qualifying for the Champions League, to be close to the top. They felt it, which was my job – but after they gave it to me. It’s not that all the time I have to push, push, push, there’s not enough energy and I don’t have that. Today they gave me what they are.”

Seasoned attendees at the Etihad have noted that the crowd and team are as unified as ever, while De Bruyne believes the anxiety in the stands is less apparent. The Belgian also sees his manager as totally comfortable in his surroundings.

“Everything is fine. He’s got his contract until the end of the year and after that we’ll see,” De Bruyne said. “I don’t think you can put pressure on him, he will decide whatever he wants whenever he wants. We’ll deal with it.

“He is more and more relaxed as he’s been so long with us. I think for him it is also easier because if you go to a new team you have to teach again.

“From the beginning, what he did with us … now after seven years it is repeating itself so I feel there is less of an edge sometimes and maybe it is more calm for him. I don’t know, I don’t think you’ll get too much out of him [about his future] and that is fine.”

Marco Silva, the Fulham manager, could take heart from coming within seconds of a point at City but felt his players needed to show more quality on the ball playing against 10 men.

“Off the ball, if you show the capacity to keep more of the ball ourselves and to be more brave, of course it will be tough for them,” he said. “I think we did that with not enough quality to create more problems for them.”

Haaland admits to feeling ‘nervous’ before sending Etihad into delirium

The Etihad Stadium has seen its fair share of dramatic denouements over the past decade and perhaps Erling Haaland was paying homage to Sergio Agüero as he ripped off his shirt and began swinging it over his head as he tore away in wild celebration at Manchester City’s latest extraordinary rescue act.

Then again, maybe like most of the 52,000 in the stadium, he was simply lost in the euphoria of the moment. Summoned from the bench midway through the second half after two games out through injury, Haaland answered City’s call just when all hope seemed to be fading and, in doing so, penned yet another thrilling chapter in what is fast becoming a fairy-tale season for the Norway striker. Oh how glad Pep Guardiola will be to have his goal machine back.

Fulham were sixty seconds away from a memorable point when the clock hit 94 minutes. And then the 10 men of City, who had run themselves into the ground in desperate search of a winner, grabbed themselves a lifeline when the otherwise excellent Antonee Robinson tripped the irrepressible Kevin De Bruyne and referee Darren England pointed to the penalty spot. Over to you, Erling.

For such an accomplished football team, City have been strangely flummoxed from 12 yards far too often under Guardiola and you could almost taste the anxiety among the crowd as Haaland repositioned the ball three times before being satisfied that it was in a position to hit.

For a split second, City fans must have feared their penalty hoodoo had jinxed even their formidable No 9 as Bernd Leno dived down to his right and got his hand to the ball. Yet the ball squeezed under him and into the bottom of the net and it was hard to believe any of Haaland’s previous goals for City this season had been received quite like No 23, the roar from the Etihad crowd probably matched only in its ferocity by the groans emanating from Arsenal and the rest of the Premier League’s title chasers.

This lot are not going to give up their crown easily. “I was nervous [for the penalty],” Haaland said. “It was one of the most nervous moments of my life – but fantastic, amazing feeling. I love it.”

City were a goal to the good courtesy of Julián Álvarez and firmly in control when the game turned on its head when Joao Cancelo was sent off in the 26th minute after conceding a penalty from which Andreas Pereira drew Fulham level. From Leno’s long punt upfield, the ball had ricocheted between the chests of Carlos Vinicius and Nathan Aké before falling kindly for the Fulham striker to play in Harry Wilson.

Cancelo gave chase and thrust himself into the winger, who had been clever enough to step across the City left-back’s line. In the absence of the injured Aleksandar Mitrovic, Pereira’s penalty was inch perfect. Guardiola was not too interested in Cancelo’s pleas of innocence on the touchline and admitted he would have preferred his player to avoid the challenge and let Wilson shoot rather than being forced to play for over an hour with a man down. “Hopefully we can learn,” Guardiola said.

What followed was a masterclass in poise and patience from the champions. With Fulham sitting in and hoping to exploit their numerical advantage on the break, City could not afford their concentration to waver and, inspired by the majestic De Bruyne, they kept chipping away at Fulham’s armour.

Bernardo, Ilkay Gundogan and Rodri were excellent in midfield, the defenders were superb too and City got a second wind when Haaland and Phil Foden were eventually introduced in the 64th minute. But it was to De Bruyne that they continued to look for inspiration. “He put the team on his shoulders,” Guardiola said and he was not wrong.

Haaland thought he had scored in the 74th minute when he headed home De Bruyne’s cross only for Var to rule the goal outside for offside but neither player would lose heart.

When De Bruyne flung over a cross from the left late on and Haaland headed wide after another barnstorming run down the left, the Belgian dropped to one knee. He looked exhausted, a man who had strained every sinew in pursuit of victory. He was not done yet, though. Time was almost up when he picked up possession just inside the area as Robinson came charging out. De Bruyne sensed an opportunity and turned sharply, drawing the foul and Haaland did the rest.

As it happened: Manchester City 2 Fulham 1

Some more post-match facts via Opta

Big time players deliver when it matters most