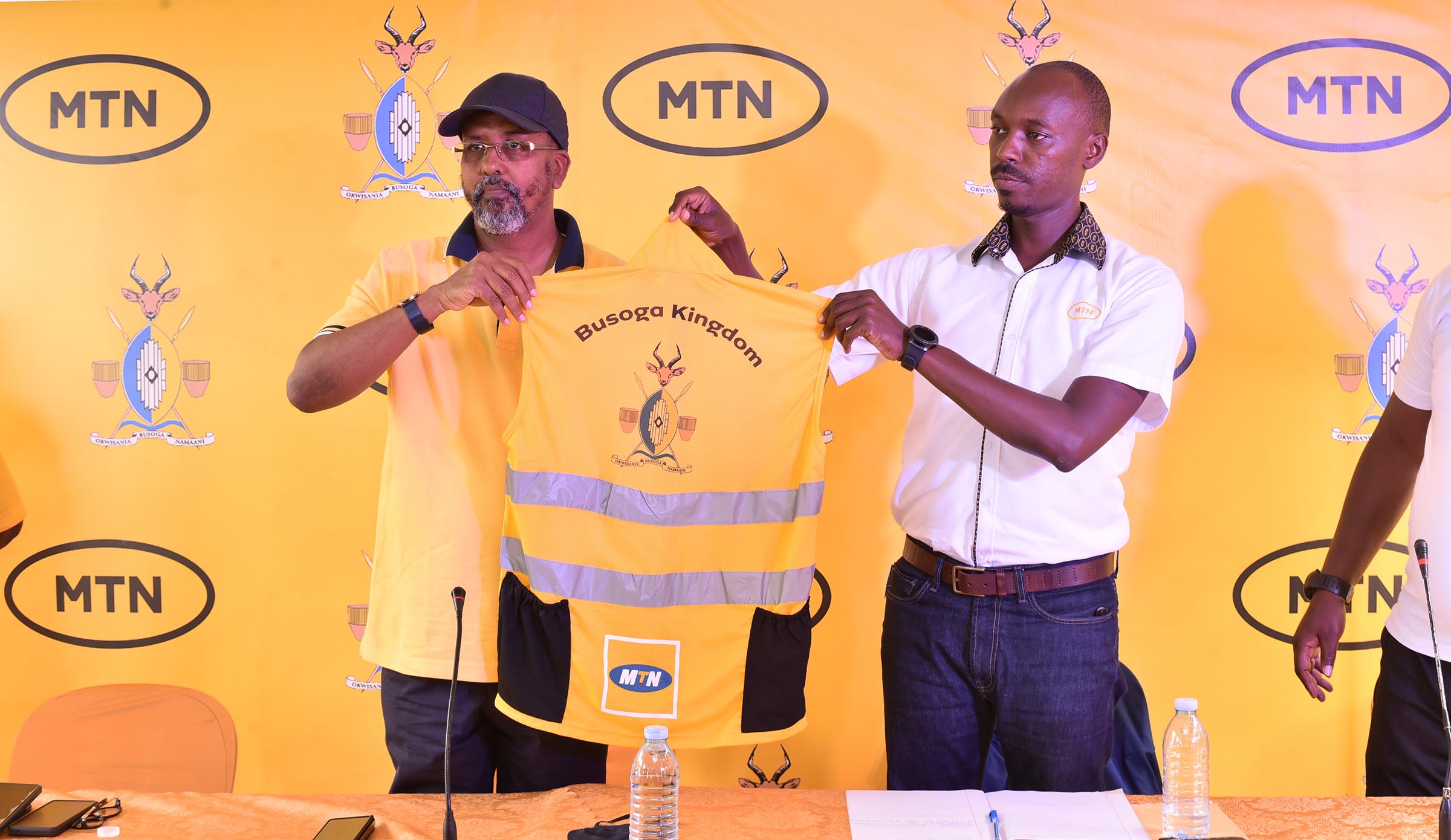 The 2nd deputy Prime Minister of Busoga, Osman Noor (L) and MTN’s Jimmy Isaraza (R) unveil the vest that shall be worn by the participants of the bicycle races

The launch of the MTN sponsored Busoga Kingdom bicycle race competitions dubbed “Obugaali Bwa Masaza” took place at the Busoga Kingdom administrative headquarters in Bugembe, Jinja, where the bicycle racing jersey was unveiled to the press and Kingdom officials ahead of the competitions that are set to start on the 30th of this month.

Speaking at the launch of the Busoga Kingdom Obugaali Bwa Masaza, Jimmy Isaraza, MTN Uganda’s Eastern Region Business Manager confirmed that the bicycle races are part of the agreement that was signed between Busoga Kingdom and MTN back in 2019.

“Under our agreement with Busoga Kingdom, MTN Uganda pledged to support the Kingdom in the realization of its aspirations by undertaking projects particularly in the areas of education, health, and sports. We are happy to note that we are delivering our promise and we remain committed to being part of the initiatives that the Kyabazinga prides in,” Isaraza said. 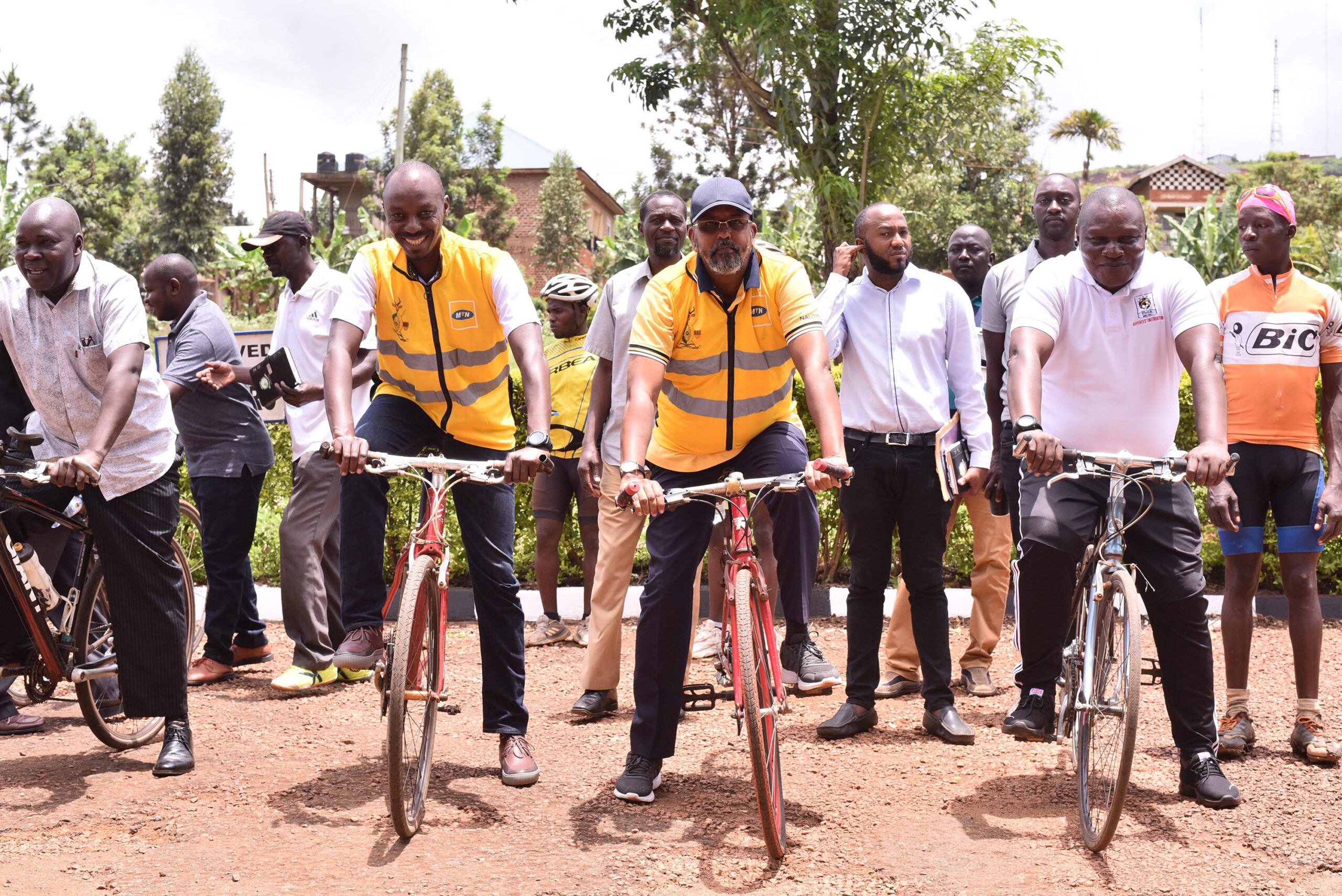 Isaraza further noted that the Obugaali Bwa Masaza competitions will continue strengthening the bond between MTN and the people of Busoga.

Owek. Osman Noor, the 2nd deputy Prime Minister of Busoga Kingdom thanked MTN Uganda for taking such a beneficial social activity to the people of Busoga and for recognizing the role cultural institutions play in mobilizing and rallying communities to important social causes.

“These bicycle races will yet again bring our people together and offer a fantastic opportunity for our people to engage constructively,” observed Noor.

The 11 counties that shall participate in the Busoga Kingdom Obugaali Bwa Masaza are; Bugabula, Kigulu, Luuka, Butembe, Bukooli, Bunha, Busiki, Bulamogi, Bukono, Bunhole-Munahumba and Bugweri. Each of the 11 counties shall hold county-level competitions to identify 10 outstanding cyclists who will represent their counties at the finals where the top counties shall win assorted cash prizes courtesy of MTN Uganda.

MTN Uganda is strongly grounded in the belief that businesses and communities are good together; Businesses only succeed if the communities in which they operate, succeed.

Besides sports, MTN has also undertaken strategic health initiatives in Busoga such as revamping and equipping of the maternity ward at Mother Kevin health center III in Kamuli district early this year and improving palliative care for cancer patients at Rays of Hope Hospice in Jinja in 2020, among others. Under education, in 2019, MTN Uganda rolled out a project to light up 30 schools in Kamuli district in a bid to improve the learning outcomes of the students in the area.