Ukraine has recaptured its first village in Luhansk, a region that Russian forces took five months to bomb into submission and conquer. 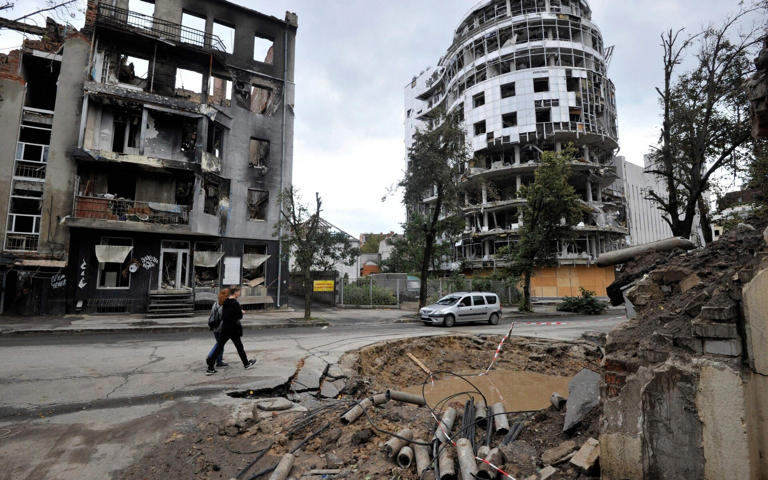 Belogorovka is the latest prize for Ukraine’s continuing counter-offensive pushing Russia away from the second city of Kharkiv.

The village lies only a dozen or so miles from the towns of Lysychansk and Severdonestsk, key regional economic centres in the wider Donbas region that the Kremlin has promised to defend at all costs.

The village also lies 45 miles east of the Oskil River, where Russian forces fled after a Ukrainian offensive around Kharkiv recaptured an area the size of Devon in a few days.

Serhiy Gaidai, the Ukrainian head of Luhansk, said that Ukrainian soldiers were now in “full control” of Belogorovka.

“We all should be patient in anticipation of a large-scale de-occupation of the Luhansk region,” he said.

Luhansk and neighbouring Donetsk rebelled against Ukraine in 2014 and fought a war to set up pro-Russia pseudo-states. The Kremlin used defending them as an excuse to launch its full-scale invasion of Ukraine in February.

But now, armed with high tech Western weapons, top-grade US intelligence and sky-high morale, Ukrainian forces have promised to retake the whole of Luhansk.

This would be yet another humiliation for Vladimir Putin, Russia’s president, whose forces had celebrated pushing Ukrainian forces out of Luhansk at the start of July.

Built on Russia’s massive artillery advantage, their offensive had been grinding and destructive. Ukrainian forces, though, had retreated, regrouped and planned a massive counter-attack based on a deception that caught Russia’s exhausted forces off-guard.

When Ukrainian forces attacked the area around Kharkiv two weeks ago, Russia’s weak defensive line collapsed and its soldiers fled.

Ukraine’s ministry of defence has now posted pictures of a captured T90-M tank, the most sophisticated in the Russian army, that was abandoned by Russian soldiers.

The newest russian tank T-90M was found in Kharkiv region in perfect condition. We ask its owner(s) to contact the #UAarmy . Please identify yourself by a sign: a white flag. pic.twitter.com/Lo1KeOtepS

“A sign of an army in crisis,” said Phillips O’Brien, professor of strategic studies at the University of St Andrews.

And despite the caution from Mr Gaidai, the Ukrainian head of Luhansk, Prof O’Brien said that Ukrainian forces can now pause for a rest and then push to recapture the whole of Luhansk and the essential supply lines that run from the southern Russian city of Belgorod to Donbas.

“If the Ukrainians cross the Oskil River in depth, the Russians may have to fall back a long way,” he said.

To capture Luhansk earlier this year, Russian forces had bombed its civilian population and its Ukrainian defenders into submission. Towns were reduced to rubble and thousands of people fled.

And life under Russian occupation was also brutal.

In Izyum, a town in Kharkiv region near Luhansk that Ukrainian forces liberated last week, investigators have found around 400 bodies buried in shallow graves. Some had their hands tied behind their backs and showed signs of torture. Elsewhere in Ukraine, Ukrainian energy officials said that Russia had fired missiles at the South Ukrainian Nuclear Power Plant in the city of Yuzhnoukrainsk.

Analysts have said that the Kremlin may want to distract attention from its military setbacks.

The Kremlin’s international credibility has also taken a battering after it was announced that Armenian and Azerbaijani officials will fly to New York for peace talks mediated by the US.

This reflects the Kremlin’s crumbling authority since it invaded Ukraine. The Kremlin has previously seen itself as the main powerbroker in the former-Soviet south Caucasus.