The Telegraph:Follow View Profile Queen Elizabeth II laid to rest amid an outpouring of love

At the end, it was so simple – a son and nation coming together to mark the passing of the second Elizabethan era and its irreplaceable Queen. 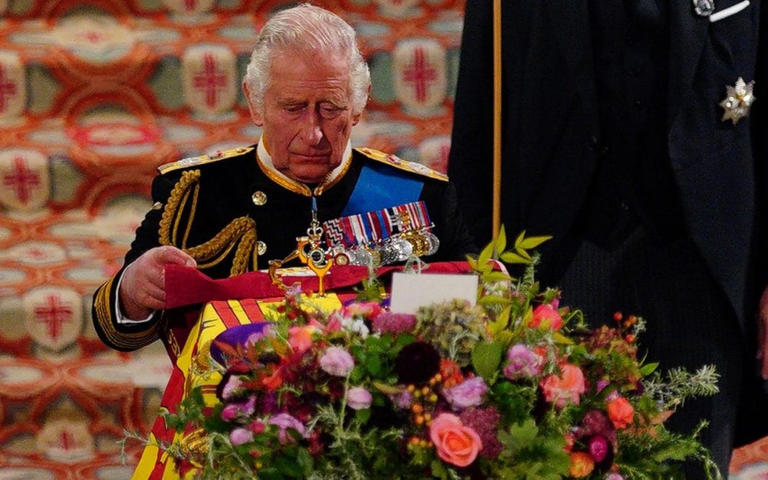 In ritual there was comfort. The laying of the Queen’s Company Camp Colour, the slow, dignified lowering of her coffin, and a King whose grief-etched face represented us all.

From all the glorious spectacle of a sovereign’s funeral, unseen for seven decades and never to be replicated on this scale again, Queen Elizabeth II has made her final journey to rest with the husband she adored.

After a 70-year reign, 11 days of mourning and six hours of formal ceremony on Monday, it took three minutes for her coffin to be lowered out of public sight as the sound of a piper’s lament faded into the distance.

As the sun set on her reign, there was a final ceremony behind closed doors. Her closest family said goodbye as, in the most private of burials, she joined her father, mother, sister and the Duke of Edinburgh.

The day, with its pomp and ceremony, was also the moment the watching world could sit back and remember the late Queen. There was, the Archbishop of Canterbury said as he gave the sermon at Westminster Abbey, an “outpouring of love”.

From the deep traditions of centuries of monarchs before her to a surprise appearance from her two corgis and her fell pony, Emma, Queen Elizabeth II’s personality shone through in many moments.

Her devoted son, now the King, performed his ceremonial duties with care despite the personal loss he could not quite hide.

As the Imperial Crown, orb and sceptre were taken off the coffin for the final time, the King gripped the St George’s Chapel pew in one hand and his sword in the other before a rendition of God Save the King that will not be matched in poignancy. The late Queen’s young great-grandchildren, Prince George and Princess Charlotte, took their places in the history books with astonishing poise in an unmistakable show of the royal continuity she held so dear.

The world, too, played its part, the public descending on London and Windsor in their millions to show their respect with flowers, bowed heads and, occasionally, complete silence.

The final day of mourning was designed to take Queen Elizabeth II from her lying in state at Westminster Hall, where the queue to see her had become an event in itself, to her home.

As heads of state, foreign royalty and the full military might of UK and Commonwealth assembled at Westminster Abbey, the National Grid reported a two-gigawatt power drop – the equivalent of 200 million lightbulbs being turned off – as people paused everyday life to focus on their televisions.

All living British prime ministers were joined by Joe Biden, the US president, Emmanuel Macron, the French president, and the leaders of the Commonwealth realms the late Queen loved so well.

Her former ladies-in-waiting, loyal to the last, trooped into the Abbey, with staff dotted among the congregation. All were there to pay their respects to the 96-year-old described by the Archbishop as a “leader of loving service”.

The coffin, carried by the bearer party of the Queen’s Company 1st Battalion Grenadier Guards, was placed on the 123-year-old State Gun Carriage, drawn by 142 naval ratings – including women for the first time – who formed a sea of bobbing white hats as they marched. 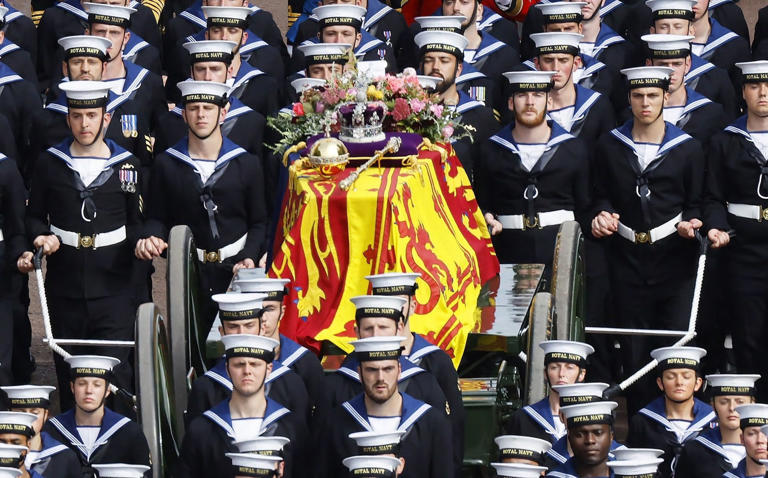 Behind them, the King, his siblings and his two sons formed a now-familiar walking procession, some in uniform and some – Prince Andrew and Prince Harry – as civilians. Prince George and Princess Charlotte, travelled to the abbey with their mother, neat in black mourning dress.

On the coffin amid the regalia was a wreath of flowers standing out in vivid colour, chosen by the King from the gardens of Buckingham Palace, Clarence House and Highgrove House and including myrtle grown from Princess Elizabeth’s wedding bouquet. A handwritten note on top read: “In loving and devoted memory. Charles R.”

The Royal family followed en masse up the aisle of the abbey, those marching joined by their spouses including the Queen Consort, Princess of Wales, Duchess of Sussex and Countess of Wessex. The two Wales children, aged nine and seven, walked between their parents.

The Archbishop echoed the late Queen’s own comforting words during the Covid pandemic as he told her grieving family and country: “We will meet again.”

Afterwards, as London took its turn to again show how much the Queen meant to her public, a 1.7-mile route was lined by crowds, some climbing lamp posts for a better view.

At Buckingham Palace, beneath the balcony that has been the scene of so many happy moments, staff lined up to offer their final bow or curtsy as the gun carriage rolled past.

The procession continued down Constitution Hill and up to Wellington Arch, dipping briefly out of view as the boom of the minute guns ceased and the drummers stopped their beating.

As the Royal family looked on, surrounded by the military, the coffin was transferred from the gun carriage to the State Hearse to make its final journey by road to Windsor before a crowd throwing flowers in its path.

At Runnymede, farmers parked tractors in formation along the side of the road to honour her. By the time the hearse arrived in Windsor, it was laden with single roses, carnations and wild flowers.

On the Long Walk, huge crowds gathered. The late Queen’s pony, Emma, was stationed by the side. Her two corgis, Sandy and Muick, were waiting at the castle.

In St George’s Chapel, the congregation of friends, family and loyal staff heard the prayers and formal ceremony of the committal of a monarch that had never been televised before.

In the ceremony’s final moments, the late Queen’s children watched intently as the Imperial State Crown, orb and sceptre were removed from her coffin and placed on the altar by the Dean of Windsor.

The King draped the Queen’s Company Camp Colour of the Grenadier Guards on the coffin, a signal of where their former commander in chief now lies.

The Lord Chamberlain broke his Wand of Office in two, the finality of his symbolic gesture reflected in the King’s face.

As the coffin was lowered, the television cameras spared the tears of the Royal family to cut to the sound and sight of the Queen’s personal piper fading into the distance.

At the sound of the congregation singing God Save the King, Charles – a little red-eyed – stood in silence as the role he has always been destined to fulfill became reality. On Tuesday, he will wake to a new era as full-scale public commemorations give way to another week of royal mourning.

After all the grandeur, all the public sorrow and celebration, the Queen is home.