The Royal Family on Monday night paid a touching final tribute to the late Queen after she was laid to rest at an emotional state funeral. 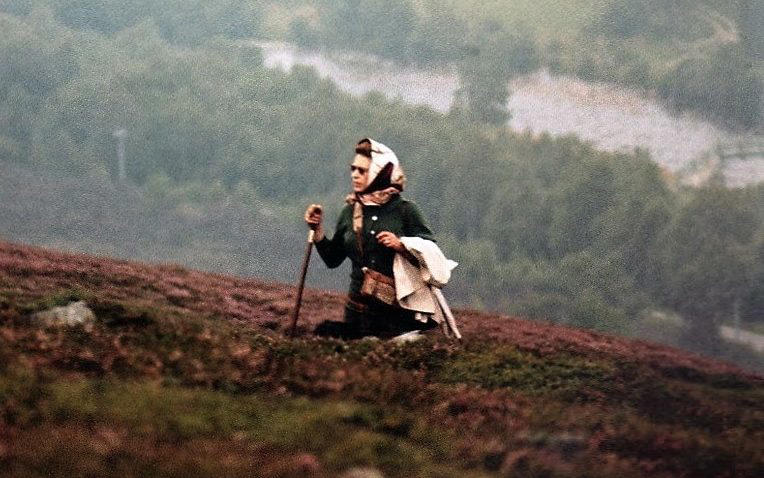 The family’s Twitter account published a never-before-seen picture of the Queen taken at Balmoral in 1971, with the words: “May flights of Angels sing thee to thy rest. In loving memory of Her Majesty The Queen.”

The quote is from Shakespeare’s Hamlet, and was said by King Charles’s first address to the nation on the day after the Queen’s death.

The photograph features Her Late Majesty hiking through the heathlands in Scotland.

In Act 5 Scene 2 of William Shakespeare’s longest play, Hamlet’s best friend, Horatio, holds his dying friend in his arms and pays tribute to the Prince of Denmark, saying: “Now cracks a noble heart. Good-night, sweet prince, And flights of angels sing thee to thy rest!”

The photograph is believed to have been taken by Lord Lichfield, the late Queen’s cousin. Lord Patrick took the official photographs of the King’s wedding to Diana Spencer.

The late Queen was on Monday night buried in a private family service at St George’s Chapel in Windsor after billions of people around the world watched her state funeral.

The Royal family is observing another week of mourning for the Queen after a state funeral full of emotion and ceremony under the gaze of the world.

King Charles III decreed on September 9, the day after the Queen died following her 70-year reign, that a period of mourning would be observed until seven days after the funeral.

Buckingham Palace said: “Following the death of Her Majesty the Queen, it is His Majesty the King’s wish that a period of royal mourning be observed from now until seven days after the Queen’s Funeral.

“Royal mourning will be observed by members of the royal family, Royal Household staff and representatives of the Royal Household on official duties, together with troops committed to ceremonial duties.”

The family members are not expected to carry out official engagements, and flags at royal residences will remain at half-mast until 8am after the final day of royal mourning.

They have been left bereft by the death of their mother, grandmother and great-grandmother, and at times their grief was palpable with Charles looking emotional and close to tears at the state funeral.

The Countess of Wessex was also seen weeping during the long day as was the Duchess of Sussex, who returned with the Duke of Sussex to the royal family to share their grief.

But Charles and his family have been consoled by the support and love they have received from the public, including the tens of thousands who turned out to watch the late monarch’s funeral procession make its slow journey through the capital and on to Windsor Castle for the committal service.

The Queen was finally laid to rest with her husband the Duke of Edinburgh during a private evening burial service attended just by close family.

The family’s website said it was conducted by the Dean of Windsor, adding: The Queen was buried together with The Duke of Edinburgh, at The King George VI Memorial Chapel.”

The day of the funeral was filled with personal touches, with the wreath adorning the Queen’s coffin featuring a handwritten note from the King, saying: “In loving and devoted memory. Charles R.”

Charles had requested the floral tribute which replaced a wreath of Balmoral flowers with foliage and blooms cut from the gardens of Buckingham Palace, Clarence House and Highgrove.

The simple committal service at St George’s Chapel contrasted with the earlier state funeral, with the Queen’s close staff represented, including her senior dresser and personal adviser Angela Kelly, alongside individuals like Earl Spencer, the brother of Diana, Princess of Wales.