The Independent:Follow View Profile Bidens forced to sit 14 rows back behind president of Poland at Queen’s funeral service 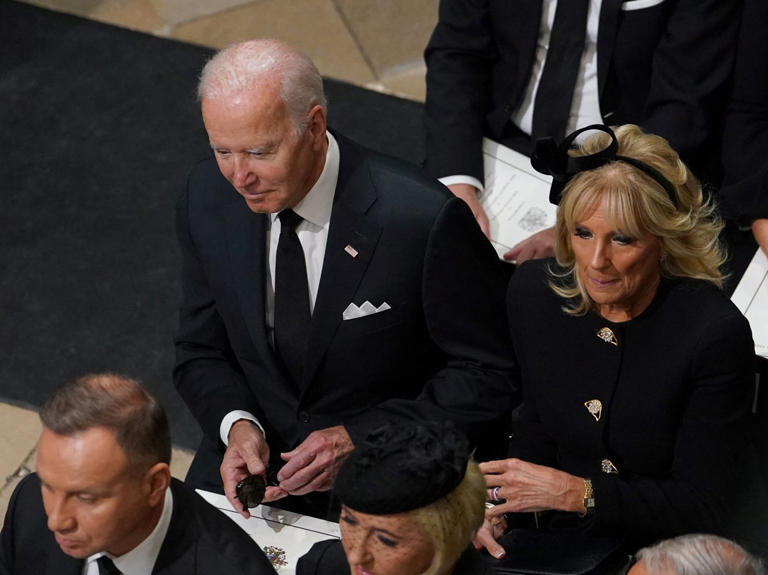 Joe Biden and Jill Biden were pictured among the world leaders in attendance at the funeral of Queen Elizabeth II at Westminster Abbey, where the US president and first lady were seated in the 14th row.

Mr Biden and his wife were seated behind the Polish President Andrzej Duda and his wife Agata Kornhauser-Duda, but in front of Czech Republic Prime Minister Peter Fiala and his wife Jana Fialová, pictures showed.

The Bidens were seated in a section of the abbey set aside for world leaders attending the event, alongside the heads of Commonwealth states, British politicians and leaders and members of the British Royal Family.

Members of other royal families, such as Japanese Emperor Naruhito, were seen setting nearer the front of the abbey for the funeral service. Many of these families had known the late Queen for decades.

Mr Biden, who met the Queen last year for the first time as US president, had an aisle seat for the funeral service, while Dr Biden was placed next to Ignazio Cassis, the president of Switzerland.

The Bidens were pictured arriving at Westminster Abbey on Monday morning in the Beast, the US president’s armoured limousine, which appeared to briefly get stuck in traffic.

The pair were exceptions to the rule, with other world leaders arriving together in a bus moments earlier amid British advice against the use of personal flights and vehicles to attend the funeral. Mr Biden was, however, granted permission to do avoid doing so.