Queen Elizabeth II has today embarked on her final journey, carried on a wave of public grief and goodwill from the full pomp and ceremony of Westminster Abbey to the family chapel where she will rest. 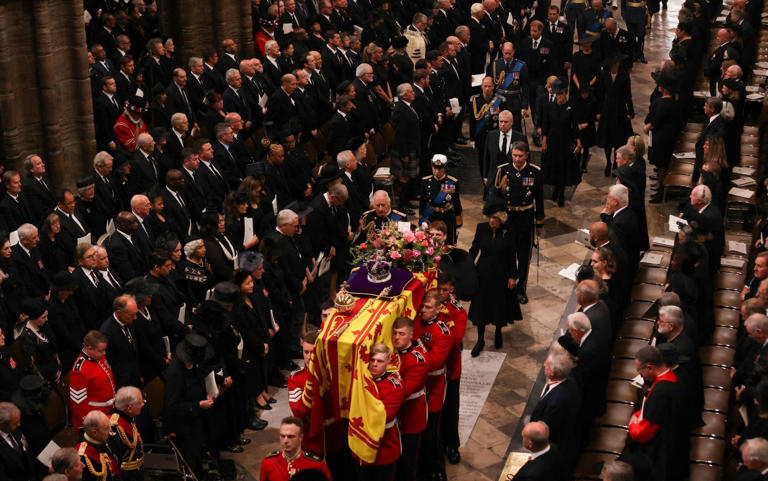 By day’s end, the journey will take her coffin from her people to her Prince; one of the grandest spectacles in British history fading away to the intimate setting of a private burial next to the Duke of Edinburgh.

The Royal family, ashen-faced, have been with her every step of the way.

And so too have the public, lining the roads in their millions as the late Queen travelled through London and home to Windsor.

As the second Elizabethan Age draws to a close, world leaders and foreign royals – all of whom will have known the late Queen in some capacity – descended on Westminster Abbey. 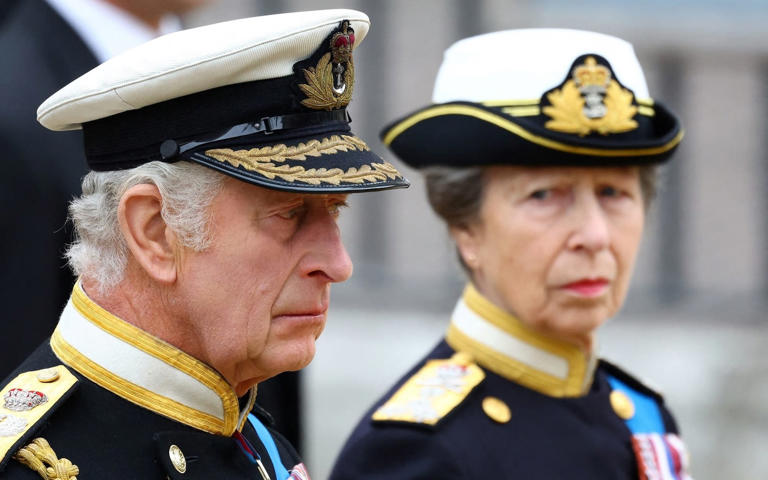 All living British prime ministers were joined by US President Biden, President Macron of France and the leaders of the Commonwealth Realms the Queen loved so well.

Her former ladies-in-waiting, loyal to the last, trooped into the Abbey, with staff dotted around the congregation among the great and the good.

All were there to pay their respects to the 96-year-old whom the Archbishop of Canterbury called a “leader of loving service”.

At 6.30am that astonishing queue to see her lying in state had ended, the final visitor paying her respects and leaving Westminster Hall in silence. 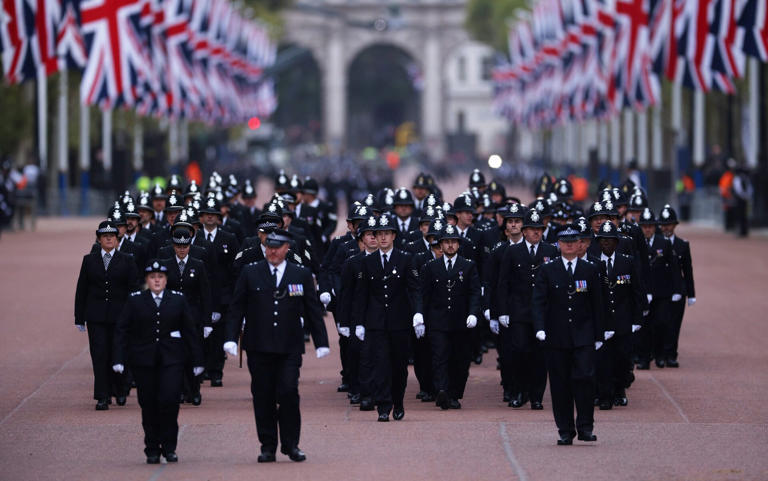 Hours later, the military assembled ready to bear the coffin on the short journey to the Abbey as the world tuned in on television.

A convoy of cars from the palace, led by the King, emerged. If it was possible for a crowd to convey support in such circumstances they tried, with warm applause following the royals in their first outing of a long and emotionally draining day.

The late Queen’s great-grandchildren, Prince George and Princess Charlotte, travelled to the Abbey with their mother, neat in black mourning dress and on their best behaviour.

The coffin, carried by the bearer party of the Queen’s Company 1st Battalion Grenadier Guards who have worked so hard this week, was placed on the 123-year-old State Gun Carriage, drawn by 192 naval ratings who formed a sea of bobbing white hats as they marched. 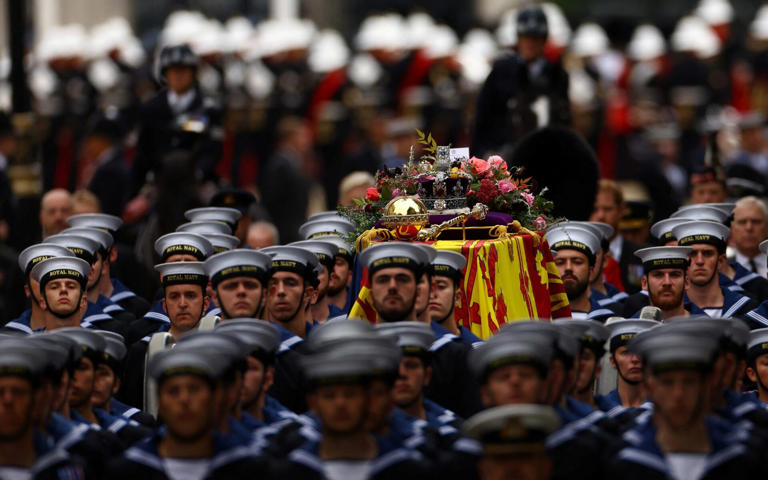 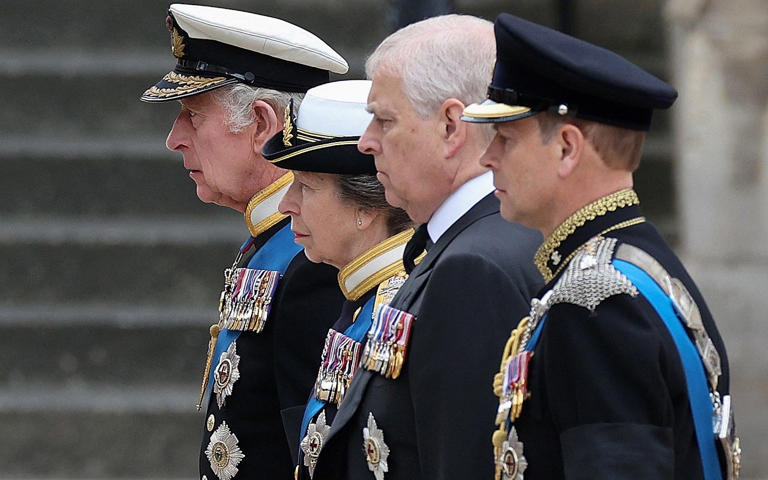 King Charles leads his siblings at the funeral of their mother, the late Queen – MARC ASPLAND© Provided by The Telegraph

The King, his siblings and his two sons joined the Royal family’s part of the procession, walking in formation behind the coffin, some in uniform and some – Prince Andrew and Prince Harry – as civilians.

A wreath of flowers, standing out in vivid colour after the white flowers which had adorned the coffin in Scotland and Buckingham Palace, was chosen by the King, cut from the gardens of Buckingham Palace, Clarence House and Highgrove House and including myrtle grown from Princess Elizabeth’s wedding bouquet.

A handwritten note on top, seen over the Imperial State Crown, orb and sceptre, read: “In loving and devoted memory. Charles R.” 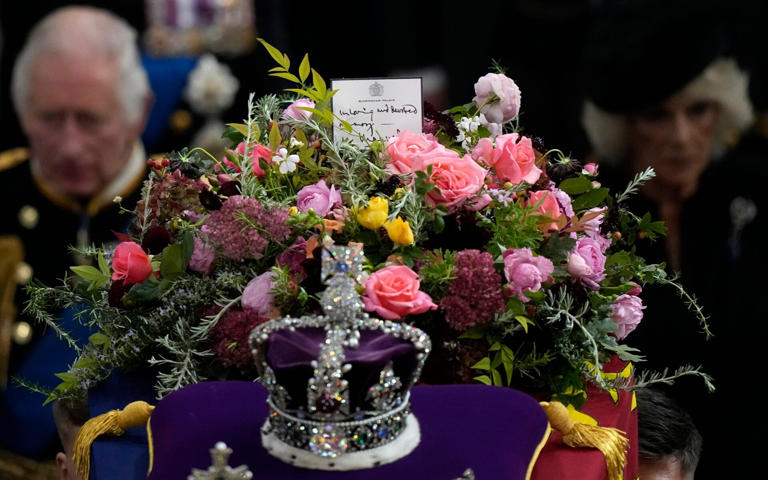 A handwritten note on top of the coffin, seen over the Imperial State Crown, orb and sceptre, read: ‘In loving and devoted memory. Charles R’ – Frank Augstein© Provided by The Telegraph

Beginning with short steps, little more than a shuffle, the procession set off to the sound of pipers and drums.

At the gates of the Abbey the musicians fell silent, leaving only the sound of marching footsteps until the gun carriage drew to a halt.

Members of the Royal family in uniform saluted; Andrew, Harry and Peter Phillips bowed their heads.

Inside the Great West Door, Prince George and Princess Charlotte waited in perfect stillness for their father the Prince of Wales.

The Princess of Wales, holding Princess Charlotte’s hand, ushered the children into formation for a new procession, in which the Queen Consort, Countess of Wessex and Duchess of Sussex would join them. 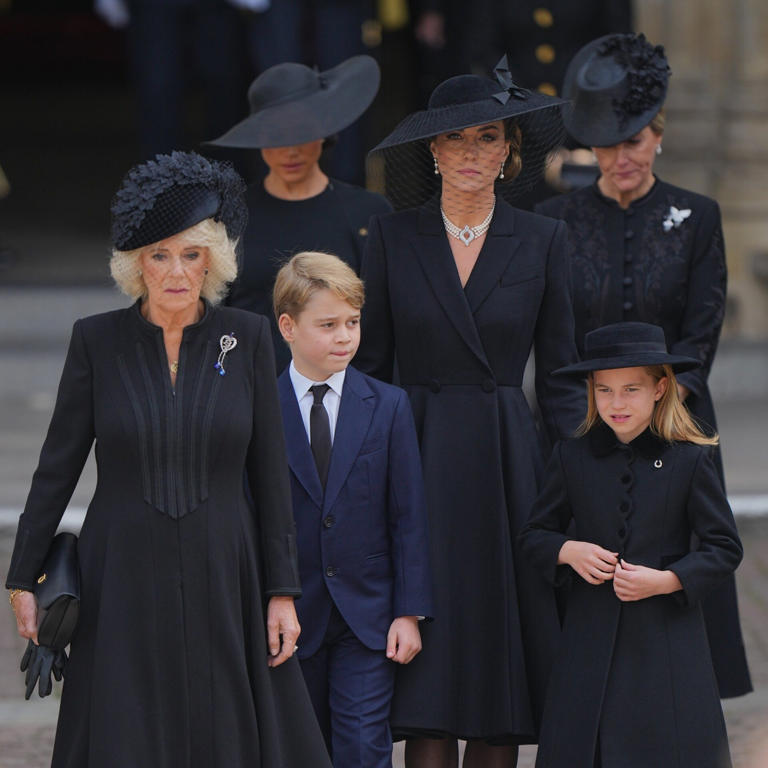 The Princess of Wales with the Queen, Prince George and Princess Charlotte – James Whatling© Provided by The Telegraph 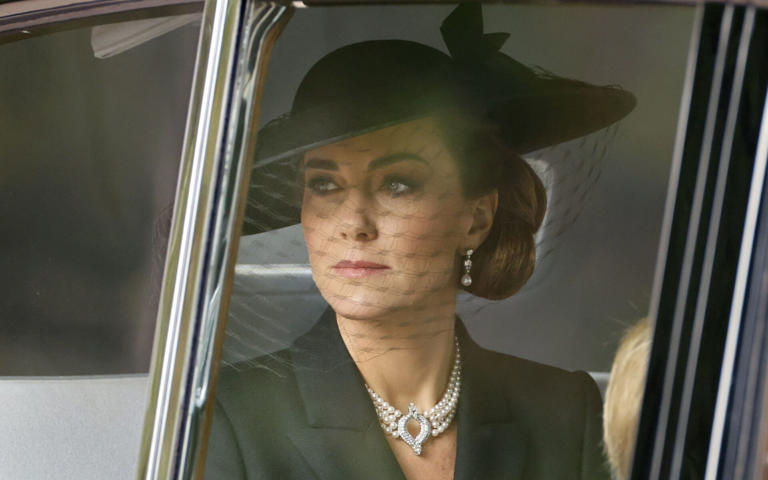 Catherine, the Princess of Wales on her way to the funeral – Shutterstock© Provided by The Telegraph

Processing slowly up the 321ft aisle of the Abbey, the Royal family followed holders of the Victoria and George Cross, multi-faith religious leaders and the late Queen’s household.

As choral music soared, the Prince of Wales and Duke of Sussex walked behind one another with furrowed brows as they took in the reality of the State funeral before them.

George and Charlotte walked between their parents, she with carefully clasped hands and he occasionally nudging into his father as if for reassurance.

When the family took their seats the Wessexes appeared emotional – Prince Edward needed a hankerchief to mop his eyes and nose while Sophie dabbed her tears with a tissue. 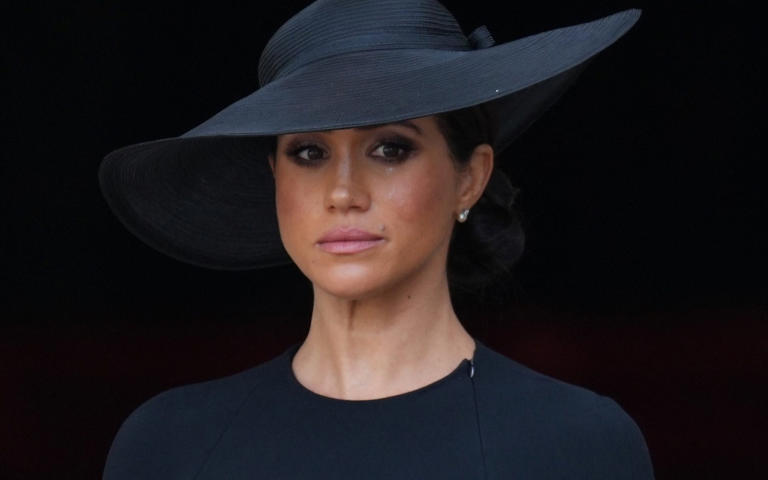 Prince Harry, sitting with Meghan in the second row behind the King and Queen Consort, was tight-lipped, perhaps trying to keep a hold on his emotions.

As the Bidding and the first hymns began, the children studied their orders of service, sitting opposite a mass of foreign royalty on the other side of the quire.

The Archbishop of Canterbury told the congregation the Queen would be remembered as a “leader of loving service”, echoing her comforting words to tell a grieving family and country: “We will meet again”.

The Rt Rev Dr Iain Greenshields, who visited the Queen at Balmoral in the weeks before her death, opened his prayer with the words: “Let us give thanks to God for Queen Elizabeth’s long life and reign, recalling with gratitude her gifts of wisdom, diligence and service.”

The service included subtle links to the late Queen and her family.

The second hymn, ‘The Lord’s my shepherd’, was sung at her wedding, when the young Princess Elizabeth and Princess Margaret summoned the Master of Choristers to Buckingham Palace in the lead-up to the day so that they could sing for him the descant they wanted to be used.

During the third hymn, by Charles Wesley, Prince George and Princess Charlotte made a valiant attempt at singing, despite not quite seeming to know the words.

As the Abbey and the nation fell into a two-minute silence, television cameras cut to Chelsea Pensioners standing ramrod straight in respect, middle-aged women arm-in-arm with their eyes closed, and a mother and toddler cuddling close in a fold-out chair in Wolverhampton.

It was followed by two verses of God Save the King, still jarring for its change in monarch.

The King, his expression initially inscrutable as he listened in silence, appeared to well up, the role he has always been destined to fulfil now a hard reality in his personal loss.

At the end, the personal piper to the Queen – whose time playing the bagpipes outside her window each morning to wake her is now at an end – performed the traditional lament Sleep, Dearie, Sleep.

As the Royal family left together, following the coffin up the aisle again, they looked drained as they continued the march towards the end of the day and a final goodbye to their mother, grandmother and great-grandmother.

Stepping into the sunlight outside, the men and the Princess Royal resumed their position in the procession as the women climbed into cars behind them. 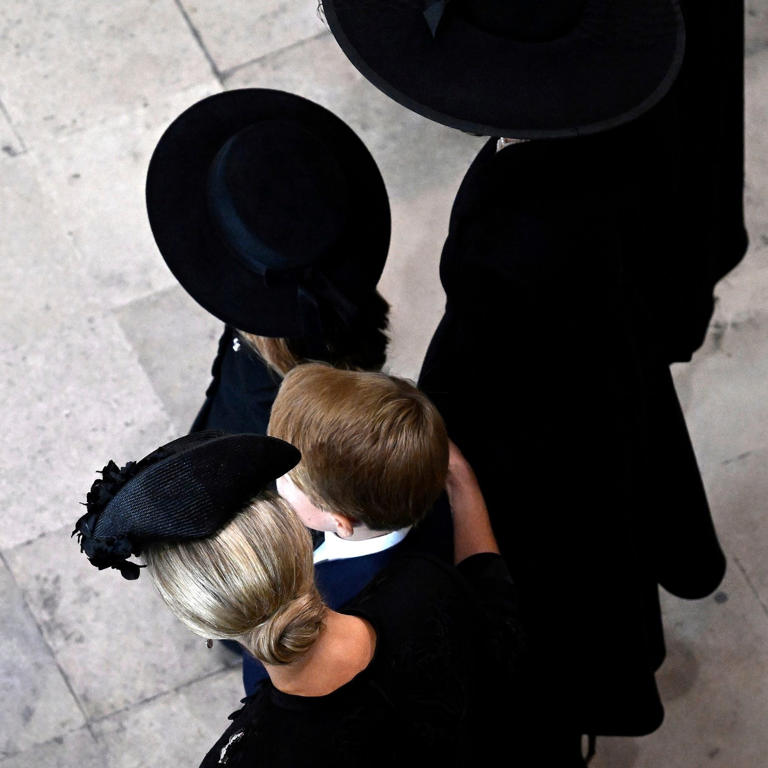 In the car, the Queen Consort pointed things out to George and Charlotte, who looked keenly out of the window with their mother.

This was the moment for the world to see a state occasion on a scale not witnessed in the 70 years since the Queen came to the throne.

The one-and-a quarter-mile procession from the Abbey to Wellington Arch took in the sights of London, with crowds dozens deep at points.

Members of the public climbed lampposts and on one another’s shoulders for a better view at the massed military swaying in perfect time as they marched.

Outside Buckingham Palace, staff lined up in single file for the final time for the Queen they have served.

Under the palace balcony that has been the scene of so many happy moments, from royal marriages to the Platinum Jubilee just three months ago, they bowed and curtsied as the gun carriage rolled past.

At Wellington Arch, the royals assembled again surrounded by the troops.

The coffin was transferred to the State hearse, setting off on the slow road to Windsor as crowds threw flowers in its path.

After all the grandeur, all the public sorrow and celebration, the Queen is on her way home.