Keep up to date with all the Manchester United transfer news and speculation ahead of the January transfer window. 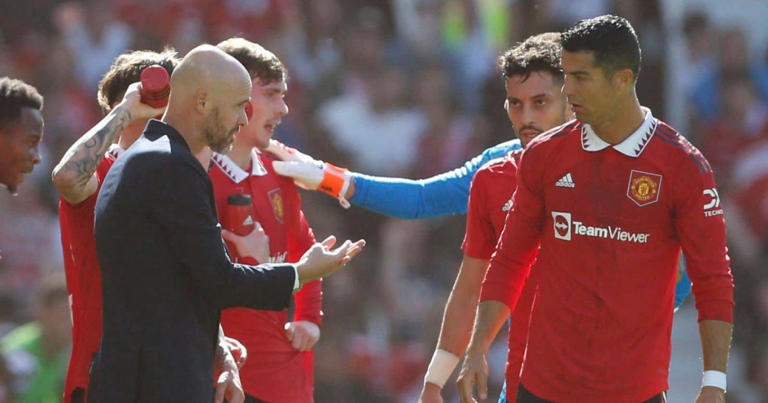 United made a slow start to the new season, losing their first two games, including an embarrassing loss at Brentford, but an unexpected and most welcome win over Liverpool in Ten Hag’s third game kickstarted a vast improvement.

All of a sudden, there appears a buzz around United again. And with thoughts turning towards the January window, we take a look at all the players United are being linked with and who the original source of the story is.

The summer transfer window officially closed at 11pm, Thursday 1 September, with this list featuring any transfer line with regards incomings and outgoing at Old Trafford since then…

The uncertainty surrounding Ronaldo’s future at Old Trafford was one of the biggest talking points during the summer transfer window.

After United only qualified for the Europa League, he made the Red Devils aware of his desire to add to his Champions League legacy at another club.

United initially insisted that they wanted to keep the 37-year-old but reports late in August suggested that they performed a U-turn and were open to a sale.

Chelsea, Bayern Munich and Atletico Madrid all distanced themselves from a deal for Ronaldo, who ultimately ended up staying at Old Trafford. We’ve rounded up all the major news about the forward since the window shut.

– Saudi Arabian club Al-Hilal were prepared to offer Ronaldo £2million a week, but he turned them down. (Marca, September 15).

– Ronaldo’s massive wages meant that a move to the Bundesliga wasn’t possible during the summer window. (Mark Behrenbeck, September 13).

– The president of the Saudi Arabian FA has admitted he’d love to see Ronaldo play in the country. (The Atheltic, September 12).

– New Chelsea manager Graham Potter has taken a different stance to Thomas Tuchel and will make a January move for Ronaldo. (Fichajes, September 10).

– Tuchel’s decision to block the summer signing of Ronaldo is one of the factors behind his Chelsea sacking. (Guillem Balague, September 7).

– Napoli were heavily linked with a transfer for Ronaldo at the end of the transfer window, but their sporting director has now dampened those rumours.

“It is bad to extinguish the dreams of the fans, but there has never been a real negotiation,” Cristiano Giuntoli said. (Il Napolista, September 6).

Who have Man Utd been linked with?

Joao Gomes – United are set to rival Liverpool for the Flamengo midfielder and could make an offer for him in January. (Liverpool Echo, September 17).

Jan Oblak – United have identified Oblak as a potential replacement for David de Gea and are willing to offer him a big-money contract. (Jeunes Footeux, September 14).

Kylian Mbappe – Alongside Liverpool and Chelsea, United are transfer options for Mbappe when he deicdes to leave PSG. (Marca, September 14).

Santiago Arias – The former Atletico Madrid right-back reportedly has his ‘bags packed’ ahead of a free transfer to United. (Johnson Saenz, September 9)

– United remain attentive to De Jong’s situation and could look to sign him again come the January window after he decided to stay at Barcelona. (Fabrizio Romano, September 6).

Brian Brobbey – United are reportedly putting the groundwork in for yet another raid on Ajax with Brobbey confirming he’s held talks with Erik ten Hag. (ESPN.nl, September 6).

Who has been linked with a move away from Man Utd?

Victor Lindelof – Roma are expected to contact United and Lindelof’s agent over a potential move in January. (Rudy Galetti, September 16).

Diogo Dalot – The right-back has enjoyed an impressive start to the season and is now at the top of Xavi’s transfer shortlist at Barcelona. (Fichajes, September 16).

Aaron Wan-Bissaka – United could reconsider their decision not to sell the right-back during the January transfer window. Crystal Palace and West Ham will probably make new proposals. (The Athletic, September 14).

Marcus Rashford – Chelsea and Atletico Madrid are both monitoring Rashford’s contract situation at United and will make a move if he fails to reach an agreement on a new deal. (Calciomercato, September 10).

Marcus Rashford – United are ready to open new contract talks with Rashford following his incredible start to the season. PSG were mentioned as suitors over the summer but a new five-year deal is being prepped by the club to keep him at Old Trafford until 2027. (The Sun, September, 8).

Moises Caicedo – Brighton want to fend off interest in Caicedo and are set to begin talks to improve his contract. (Daily Mirror, September 11).

Gavi – United have been keeping tabs on Gavi’s contract situation, but he looks set to commit his future to the Spanish club and his new contract will have an £868million release clause. (Mundo Deportivo, September 9).

Sergej Mlinkovic-Savic – The Lazio midfielder was linked with United in the summer but they ultimately signed Casemiro instead. He’s since confirmed that he’s happy at the Serie A side and isn’t thinking about a potential transfer. (Football Italia, September 8).

Cody Gakpo – United agreed personal terms with the PSV winger but decided against making a bid after spending £85million on Antony. (The Athletic, September 15).

Paulo Dybala – United tried to sign Dybala on a free transfer after he left Juventus at the end of last season, but the forward decided to join Roma instead. (Calciomercato, September 13).

Daniel Bachmann – The Watford goalkeeper has admitted he held talks with United before they decided to sign Martin Dubravka from Newcastle. (LAOLA1, September 13).

Moises Caicedo – United were the only club interested in Caicedo in the summer and they viewed him as a potential option before signing Casemiro. (Fabrizio Romano, September 12).

Joao Felix – United reportedly made a €130million bid for Felix in the summer but the Atletico Madrid forward has revealed that he was not aware of any interest in him from the Red Devils. (Marca, September 10).

Paul Pogba – Manchester City explored the possibility of signing Pogba this summer as his contract at United wound down. But he wanted to call time on his spell in the Premier League and ultimately opted for Juventus. (Fabrizio Romano, Here We Go podcast, September 7).

Antony – The Brazilian went on an Instagram rant after a row broke about between two rival agencies, who both claimed they were responsible for negotiating his record-breaking £85.5million move from Ajax to United. (Daily Telegraph, September 7).

Frenkie de Jong – United’s summer-long chase for De Jong ended in disappointment, and Red Devils director of football John Murtough privately admits they should have walked away from the deal a lot earlier. (ESPN, September 3).

Christian Eriksen – A fresh report has revealed how United pulled out all the stops to beat Tottenham to the signing of Eriksen. They offered him a staggering deal worth £200,000-a-week, as well as a £12million signing-on fee – far in excess of what Spurs were willing to pay. (Football Insider, September 3).

James Garner – The United academy graduate joined Everton on deadline day and it’s been revealed why Erik ten Hag decided to cash in. (The Athletic, September 3).

Raul de Tomas – United made a late play to sign the Espanyol striker on deadline day, a report claims. United chiefs pushed to sign him but didn’t have enough time for the deal to reach completion. (Football Insider, September 2).