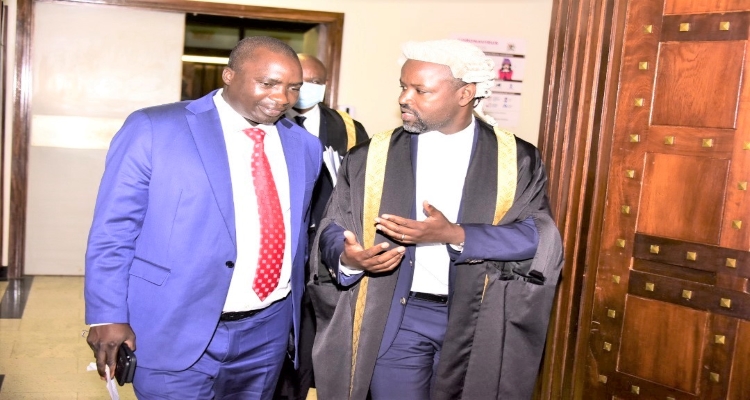 The Deputy Speaker of Parliament, Thomas Tayebwa, has criticised a resolution by the European Parliament against construction of the East African Crude Oil Pipeline (EACOP) project.

The over US$20 billion has come under severe criticism from energy rights activists, who want it stopped, capturing the attention of the European Parliament, which on Thursday, 15 September 2022 agreed to stinging measures against the coveted pipeline project.

In his communication to the House on Thursday, September 15, 2022, Tayebwa retorted, terming the resolutions “deliberate misinformation.”

“These are projects which were approved by the Parliament of Uganda, the Parliament of a sovereign country and anything to do with challenging their approval is an affront to the independence of this House and we cannot take it lightly,” he said.

The EU bile against the project, added Tayebwa, betrays neocolonial attitudes and imperialism of the EU Parliament, which he derided for closing an eye on the union’s own emissions, instead hypocritically shining the light on an emerging economy Uganda.

“It [EU motion] represents the highest level of neocolonialism and imperialism against the sovereignty of Uganda and Tanzania; the motion seeks to curtail Uganda’s progress on oil and gas development and by extension the country’s socio-economic development,” he said.

The Deputy Speaker presented figures to illustrate what he called the doublespeak of the European Parliament, saying the EACOP will only represent 0.5 percent of global emissions, yet the EU with just 10 percent of the world population emits 20 percent unfettered and member countries are exploring plans to deepen fossil-fuel related excavations unfettered.

“Who [between Uganda and the EU] should slow down?” he asked.

In their resolution, the EU condemned the EACOP as a project that will allegedly ruin biodiversity and cause irreversible climate change, which is the height of their consistent efforts to frustrate the development of the refinery, which started by forcing the hands of prospective investors to hold back on making the Final Investment Decision, which happened only early this year, since the first discovery of commercial deposits of petroleum in Uganda in 2006.

“…Calls for the EU and the international community to exert maximum pressure on Ugandan and Tanzanian authorities, as well as the project promoters and stakeholders, to protect the environment and to put an end to the extractive activities in protected and sensitive ecosystems, including the shores of Lake Albert, and commit to using the best available means to preserve the culture, health, and future of the communities affected and to explore alternatives in line with international climate and biodiversity commitments,” partly reads the resolution.

MP John Teira (NRM, Bugabula County North) said there is nothing to worry about, and accused the EU of wanting to frustrate the flow of the US$20 billion to the East African economy, but only disguised it under alleged concerns about the environment.

“Our colleagues in the European Parliament are just being overzealous; there are already measures in this country to do waste management in a very technical manner; there is nothing to fear about when it comes to environmental issues; no one should touch the project because we are talking about an  investment of US$29 billion,” he said.

MP Asuman Basalirwa (JEEMA, Bugiri Municipality) asked the Executive to, through diplomatic channels, summon the EU’s Ambassador to Uganda and formally protest the resolutions, which he said carries a tone of condescension.

The Minister of State for Foreign Affairs (Regional Affairs), Hon. John Mulimba, said he would escalate the matter to his superiors for action.