As many as 400,000 people will see the late Queen lying in state amid growing concern that five-mile queues will “see some horrible stories about people suffering” in order to pay their respects. 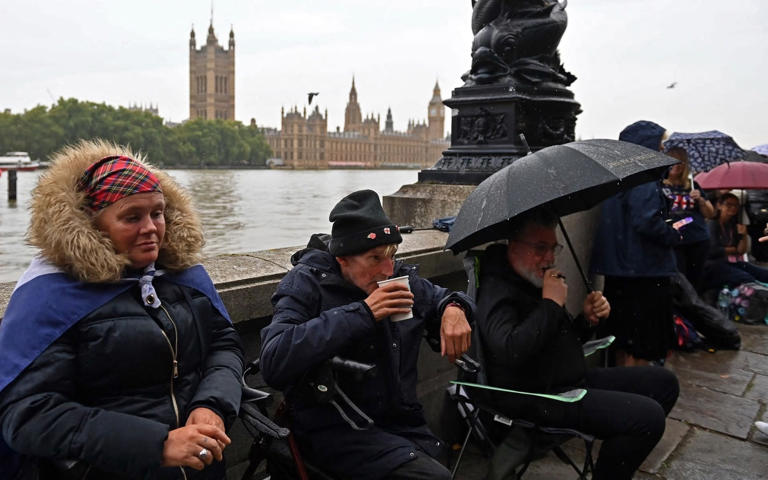 The Government warned the public to “be prepared for long queues” and told parents to think twice before bringing along children.

The queue will be cut off early at the point at which authorities believe new joiners would not be able to see the late Queen’s coffin.

Queen Elizabeth II will lie in state in Westminster Hall from 5pm on Wednesday until 6.30am on Monday, the day of her funeral. Sources said if the queue runs smoothly about 400,000 people will be able to see her lying in state – twice the number who saw the Queen Mother following her death in 2002.

Ministers have suggested mourners may have to queue for as long as 30 hours.

Well-wishers will be given colour coded, numbered wristbands before they join the queue that will allow them to leave the queue “for a short period” in order to use the toilet or buy food and drink.

In a warning not to enter the queue lightly, official guidance issued Tuesday night states: “You will need to stand for many hours, possibly overnight, with very little opportunity to sit down, as the queue will keep moving.”

Stewards have been told to look out for vulnerable and elderly people who might be struggling who can be pulled out of the queue “given a cup of tea” and, if possible, reinserted closer to the front.

The Government will use Twitter to tell people how far the queue stretches and where to join it. At its maximum length it will stretch for almost five miles from Southwark Park, running along the south bank of the Thames before crossing the river at Lambeth Bridge and doubling back to Westminster Hall. Live video feeds on the BBC’s red-button service will also show well-wishers where the back of the queue can be found.

The details of the queue’s route were disclosed Tuesday night with a separate shorter line for people with disabilities. No specific provision was made for the elderly while authorities warned well-wishers – “especially those with pre-existing medical conditions” – to “be prepared for significant wait times, including possibly overnight”.

No documentation checks will be made to make sure people are not “gaming the system” and faking disabilities to join the shorter queue. Being elderly will not be sufficient reason to be allowed in the separate accessible route, which starts at Tate Britain and where timed entry slots will be handed out.

Dame Esther Rantzen, the broadcaster and founder of The Silver Line charity for the elderly, said the lengthy queues would force old people to stay at home and watch events on the television.

“I think it will be impossible for elderly people who are at all fragile to queue,” said Dame Esther, 82. “Some elderly people like we see with David Attenborough are amazingly fit and strong but it’s going to be tough, there is no question. It is just too long a queue for many.

“The elderly will be the people most wanting to pay their respects; they grew up with her. But if you are, as I am, in your 80s you have to accept the fact it is going to be too tough to attend and we are going to have to cede our places in the queue. It is nice people are thinking of the elderly but it probably isn’t going to happen.”

Jonathan Haslam, who was chief communications secretary to then prime minister John Major, criticised the basic queuing system and suggested a ticketing operation would have worked better. In a dire warning, Mr Haslam told Times Radio: “I have a fear that we might be sleepwalking into a really difficult situation.”

He said he “could not imagine” the late Queen “would want people to go through” a 30-hour queue, adding: “I’ve got real concerns about the health of people of my generation, and even younger people. Being able to withstand all of that doesn’t make sense to me.

“’We’re going to see some horrible stories about people suffering, trying to pay their respects. And there’s got to be a better way of doing these things. And it may not be too late to rescue it.

“That’s not what Her Majesty would have wanted.”

The front of the queue began forming at Lambeth Bridge on Tuesday morning with just a handful of people sheltering under a gazebo. Officials said they would begin handing out wristbands by nightfall.

Stephen Cottrell, the Archbishop of York, who was coming from the direction of nearby Lambeth Palace, stopped to keep them company and joined in the singing of the hymn “Praise My Soul the King of heaven”. The Archbishop said: “I think the Queen’s last great gift to the nation is to bring us together.”

In the first sign that the queueing is difficult, David Carlson,75, a veteran soldier, felt ill and had to be seated while he recovered. “I had my thick coat on and I got a bit hot,” said Mr Carlson. Police came to his assistance and fellow queuers brought him food and sat with him as he regained his strength.

Mr Carlson added: “You’ve got to suck it up. I’m here, I’m not going anywhere. I swore an oath to Queen and country and I feel it’s my duty to pay my respects.”

The management of the queue – known as Operation Feather – is being run by the Department for Digital, Culture, Media and Sport, which said that a ticketing system would have been inflexible and reduced the numbers that would have been able to see the late Queen lying in state.

A source said: “If it goes smoothly this way up to 400,000 people will be able to pay their respects. This system is more egalitarian.”

Ministers are uncertain how many people will attend and remain unclear at what stage the queue will have to be shut down to ensure everyone still in it will have the chance to pay their respects before the cut off on Monday. Authorities are also urging the public to keep an eye on social media so they don’t make unnecessary journeys into London when the queue will be closed off to new joiners.

The source added: “Stewards have been instructed to look out for people struggling, to take them out, give them a cup of tea and move them up the queue. We will be actively looking out for people in distress.”

The Prime Minister’s official spokesman said on Tuesday: “A lot of people understandably will want to see the lying in state and we will do everything possible to facilitate as many people as possible, including those who may not be physically able to wait that long, because of disabilities, for example.”

More than 1,000 police officers, stewards and volunteers from the Scouts, Samaritans and St John’s Ambulance will be on duty to assist the public as the queue wends its way. Along the route, the British Film Institute will have an outdoor screen showing archive footage of the late Queen and from her reign to keep crowds entertained as they shuffle past.

Only people with wristbands will be able to enter Westminster Hall and the bands are not transferable.

An airport style security system will be operated before the hall. Water bottles must be emptied and food and drink consumed. Authorities believe the faster the security checks work, the more people will be able to visit.

Once inside Westminster Hall, mourners will be able to walk past the Queen’s coffin which will be raised on a catafalque and draped in the Royal Standard, with the Orb and Sceptre placed on top.

The coffin will be guarded around the clock by a vigil of units from the Sovereign’s Bodyguard, the Household Division or Yeoman Warders of the Tower of London.

Once people are in the Palace, well-wishers should remain silent and “dress appropriately for the occasion”, according to the official guidance. This amounts to a ban on clothes that carry any political or offensive slogans. Antisocial behaviour, queue-jumping or drunken behaviour will see people ejected.