Ukrainian forces reached parts of the Russian border in their lightning offensive that has led to the firing of a top Russian general. 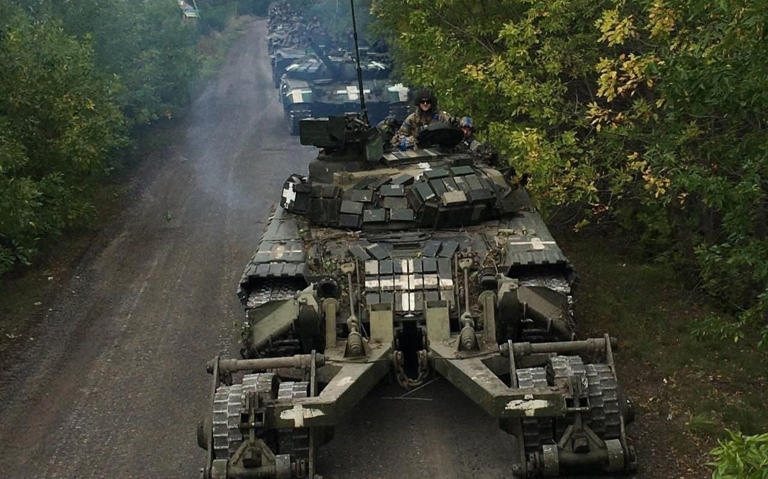 It came as the Kremlin on Monday insisted it would still win its war against Ukraine despite the collapse and rout of its army group near Kharkiv.

Kyiv’s troops on Monday reached parts of the north-eastern border that had been occupied since the first day of the war in February. They were also reported to have crossed the Siversky Donets river in Luhansk and Donetsk regions to threaten Russian lines of communication there.

Dmitry Peskov, Vladimir Putin’s spokesman, vowed that the “special military operation” would continue but refused to answer directly when asked if Putin retained confidence in the military leadership.

“The military operation continues. And it will continue until the goals that were originally set are achieved,” he told journalists on Monday.

“The president is in round-the-clock communication with the Minister of Defense and with all military commanders. It cannot be otherwise during the special military operation,” Mr Peskov said.

Lt Gen Roman Berdnikov, the commander of Russia’s Western army group, which was responsible for that part of the front, was relieved of command on Sunday, according to Ukraine’s military intelligence service.

It said he had been in post since August 26 when he replaced Lt Gen Andrei Sichevoi, who was appointed in July and lasted only three weeks before being removed.

Earlier Russia’s ministry of defence said its troops had withdrawn from the Kharkiv region to “regroup” on the eastern side of the Oskil river.

Ukraine launched a surprise attack on Russian lines last Tuesday with the goal of pushing the Russians away from Kharkiv, Ukraine’s second city, and setting up a future assault on Izyum, a strategically vital command and logistics centre for Russia’s assault on Donbas.

The attack triggered a catastrophic Russian rout that saw the Ukrainians capture Izyum and Kupiansk, a rail and road hub controlling Russian supply lines to Donbas, over the weekend.

Ukraine’s ministry of defence on Monday said it had liberated 20 more settlements in the previous 24 hours.

It said its forces also recaptured 500 square kilometres (193 square miles) in the southern Kherson region, where a separate offensive began two weeks ago.

Sources on both sides reported ongoing fighting for the Russian-held town of Liman in the northern Donetsk region, which Ukraine attacked late last week.

Oleksii Reznikov, the Ukrainian defence minister, said the counter-offensive marked a new phase of the war made possible by the supply of Western weapons like Himars rocket systems.

“The counter-offensive is the third phase” of Ukraine’s plan to retake positions beginning in the south and north, Mr Reznikov told Le Monde newspaper.

The first phase was an attempt to dissuade Russia from pressing its attack, while the second aimed at “stabilising the front and testing their capacities for resilience”.

Britain’s defence intelligence said Ukraine had recaptured an area twice the size of greater London during the course of the lightning offensive that began last Tuesday.

Oleh Syniehubov, governor of the Kharkiv region, said Ukrainian troops had reached the border to the north and east of the city.

One video posted online showed Ukrainian troops closing the barrier at a Ukrainian border post and replacing a stop sign removed by the Russians.

Vyacheslav Gladkov, the governor of Russia’s Belgorod region, which neighbours Kharkiv, said Ukraine had shelled a Russian border post, killing one person. The report could not immediately be confirmed.

Ihor Terekhov, the mayor of Kharkiv, said that power and water had been restored to 80 per cent of the city’s population by Monday afternoon.

Russian missile strikes on the power grid, including Kharkiv’s biggest power station, caused blackouts across much of eastern Ukraine on Sunday night.

The strikes were the first of such scale on essential civilian infrastructure and drew a furious response from Volodymyr Zelensky.