The Telegraph:Follow View Profile Liz Truss knew before she stood up in the Commons that Queen Elizabeth was gravely ill

It was one of Liz Truss’s most vociferous critics who brought into sharp focus the weight resting on the new Prime Minister’s shoulders. 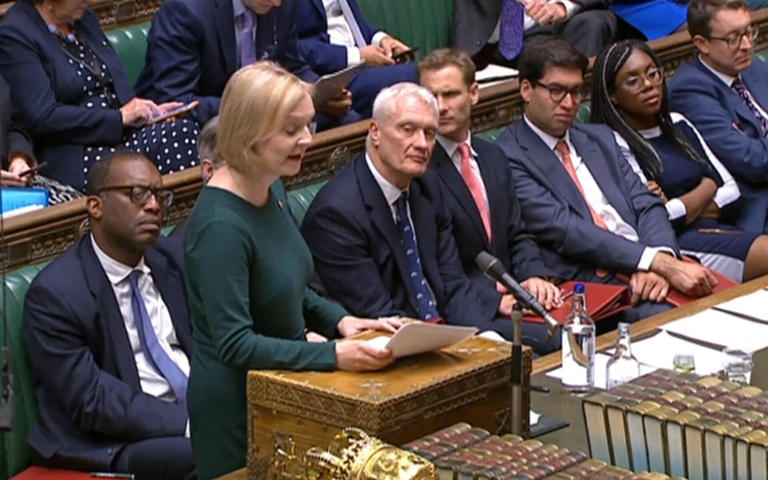 Ian Blackford, the Scottish National Party leader, made a point of telling the Commons that his thoughts were with Ms Truss, who “just days into her term in office” was “having to come to terms with the enormousness of the loss of the head of state, and show the leadership that is now required in her position”.

It had been believed that the first Ms Truss knew of Queen Elizabeth II’s declining health was when Nadhim Zahawi, Chancellor of the Duchy of Lancaster, had urgently briefed the Prime Minister following a Commons statement on her energy rescue package, 24 hours earlier.

But The Telegraph understands that when Ms Truss entered the Commons to announce the single-biggest economic intervention in British peacetime, she already knew that the monarch’s health was rapidly declining, and that her death was believed to be imminent. Mr Zahawi’s update, shortly after midday, conveyed the latest in a series of messages from royal aides that morning.

Ms Truss was first informed of the state of the Queen’s health early on Thursday morning, when Simon Case, Cabinet Secretary, interrupted a meeting to break the news. In Balmoral, concerned aides to the Queen had also raised the alarm with those around Prince Charles. The monarch’s burgundy-liveried helicopter was dispatched from Windsor at 6.48am to collect the heir to the throne from Dumfries House in Ayrshire. Charles arrived at Balmoral by 10.30am. 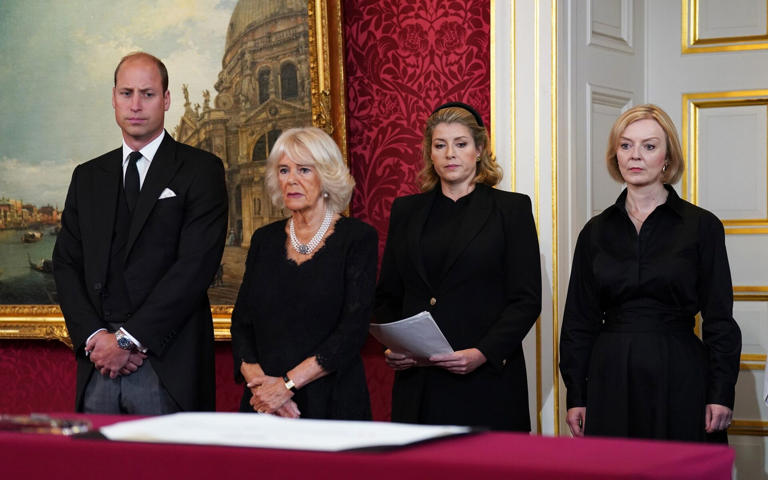 The Prince of Wales, Queen Camilla, Lord President of the Council Penny Mordaunt and Prime Minister Liz Truss during the Accession Council ceremony at St James’s Palace on Saturday – Kirsty O’Connor/PA© Provided by The Telegraph

Until the moment of Mr Case’s intervention, Ms Truss’s entire focus had been on the planned unveiling of her Energy Price Guarantee: centrepiece of a monumental package of support designed to shield households from the worst of the cost-of-living crisis and launch her premiership with a bang.

The Prime Minister had finalised the details of the plan at 10.30pm the previous evening, following a series of meetings in the Cabinet Room, in which she had, according to an aide, gone through the package “line-by-line”, grilling officials on the finer points.

By the time Ms Truss’s convoy swept into Parliament from Downing Street 20 minutes later, at 10.50am, Mr Case was already beginning to ratchet the Downing Street and wider Whitehall machine into action. It wasn’t just the Prime Minister who was new to her role – Ms Truss had begun her first day in No 10 on Tuesday with a clear-out of staff and her new crop of aides were only beginning the process of settling into their new roles.

Helpfully, Mr Case, as a former private secretary to Prince William, is steeped in royal protocol, as well as the mechanics of Whitehall. The civil service machine showed how “incredibly effective” it can be at times like this, said one member of staff. 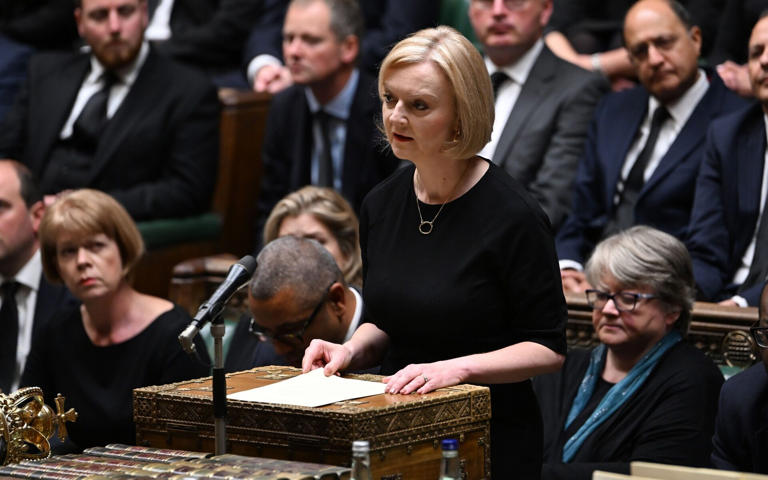 Ms Truss was in her Commons office, yards from the Commons chamber, making the final preparations for her statement, when she was informed that the Queen’s death was believed to be “imminent”.

The news was greeted with “shock, immense sadness and incredulity”, said one source.

The sequence of events helps to account for the sombre expression on Ms Truss’s face as she entered the chamber shortly before 11.40am, when she exchanged brief words with Sir Lindsay Hoyle, Commons Speaker, before making her way to her place on the front bench. It also explains why Mr Zahawi’s later intervention did not cause visible shock or surprise.

The delighted cheers of Tory MPs as Ms Truss made her way to her seat jarred with the Prime Minister’s insight into events at Balmoral. But it was another 30 minutes before it started to become apparent to others in the chamber that something was amiss.

Ms Truss delivered the pre-prepared statement, revealing that typical household energy bills would be capped at £2,500 for the next two years – an announcement that was intended to be seismic but was about to be overshadowed by an event that would reverberate around the world.

Minutes after she had sat down and Sir Keir Starmer had begun his response to the statement, Mr Zahawi entered the chamber and squeezed onto the front bench, between Ms Truss and Kwasi Kwarteng, the new Chancellor. He began whispering into the Prime Minister’s ear before handing her a note folded into a square.

A similar note was passed to Angela Rayner, Sir Keir’s deputy, as the Labour leader continued his response. 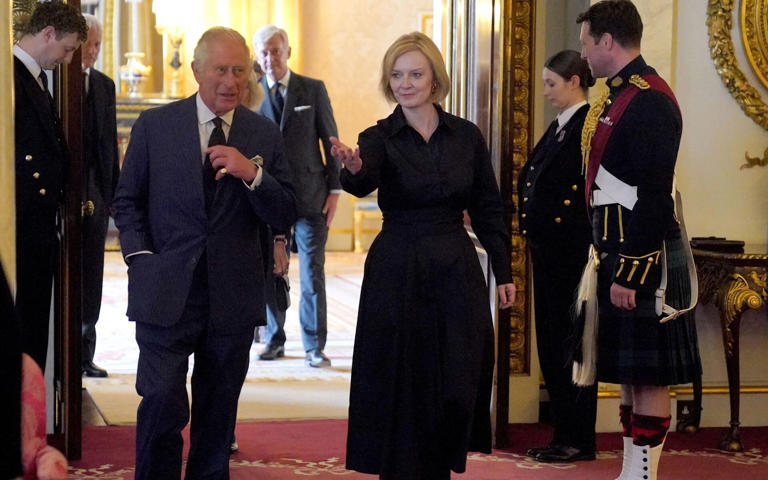 Liz Truss and King Charles – AFP© Provided by The Telegraph

A quarter of an hour later, a statement from Buckingham Palace announced that the Queen’s doctors were “concerned for Her Majesty’s health and have recommended she remain under medical supervision”. The statement added: “The Queen remains comfortable.”

Ms Truss reconvened her staff to finalise a second speech that afternoon – a response to the unfathomable loss of the monarch with whom she had expected to attend weekly audiences as Prime Minister.

At 4.30pm she was in the Prime Minister’s flat above No 11 Downing Street when a telephone call came through from the Palace. It fell to Mr Case to pass on the message: the Queen had died. The forewarnings earlier in the day did little to diminish the magnitude of the news.

The following day, Ms Truss was escorted through Buckingham Palace for her first audience with the new King. Following an initial curtsy, the Prime Minister offered her “very, very sincere condolences” and the new monarch described how his mother’s death was, “The moment I’d been dreading – as I know a lot of people have.”

Now, an aide suggested, the Prime Minister will turn to the task of helping to “guide the country through this extraordinary period over the next 10 days and beyond”.