Napoli’s best game since the San Paolo stadium was named after Diego Armando Maradonoa. That’s how we would describe the Azzurri’s match against Liverpool today, with Luciano Spalletti’s band able to demolish and, let’s face it, humiliate Liverpool with a very clear 4-1 victory. 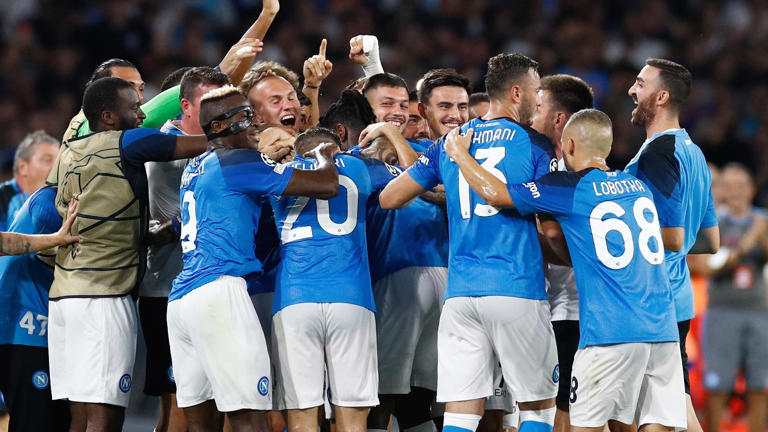 The last time Liverpool had conceded four goals in Europe was against an Italian team: against Roma on 2 May 2018.

The clue that the match was one of the good ones came after less than a minute, when Victor Osimhen grabbed a sensational post before, a few minutes later, the referee whistled the first turning point of the match, namely the penalty kick awarded to Napoli for a hand foul by Milner in the box. From the penalty spot, the MVP of the match Piotr Zielinski was cool to cross the ball and put Alisson away.

A second penalty kick was then whistled, this time for Van Dijk’s tripping of Osimhen. From 11 yards out, however, the Nigerian failed to finish, allowing himself to be hypnotised by the Liverpool defender. Much bad luck for Osimhen, who had to leave the pitch through injury before the end of the first half. In his place, making his Champions League debut, was Cholito Simeone.

On the half-hour it was Anguissa’s turn to score the goal of the momentary 2-0 partenopeo. After a nice exchange with Zielinski, the number 99 unloaded a beautiful left-footer at the first post from close range.

The 3-0 came from the man who had just entered, Giovanni Simeone, in his first appearance in Europe’s top competition. The former Hellas Verona man did well to find himself ready in front of goal after a devastating move on the right by Georgian phenom Kvaratskhelia. 3-0 at half-time with no history.

Then, at the start of the second half, Napoli also scored the 4-0 goal, again with Zielinski, who pierced Alisson with a delightful dig. The Reds’ only real reaction came from Luis Diaz’s goal two minutes later, with a fine shot on the turn that surprised Meret.

After that the Parthenopean goalkeeper only suffered on a header again from Diaz, on which, however, he was alert to deflect into the corner. The party in Naples can now get underway, and this time it is more than deserved.