The Telegraph:Strength in numbers as Cambridge gang arrives for first day at new school

It is the look that says, “we’ve made it”. As relieved parents on the school run after the long summer holidays; as mother and father to three excited children in the most unusual of circumstances. 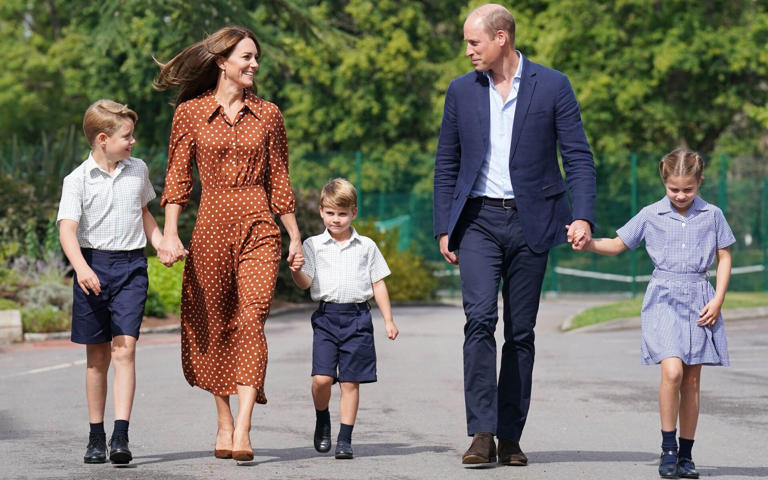 And as something more than that: the picture of modern royalty as a self-proclaimed “gang” of five – and the monarchy’s future.

As the Duke and Duchess of Cambridge, hand in hand with their children, made their way on the first of many school runs of this new era of their lives, they made time for a brief shared glance to take it all in.

The photograph was intended to capture the milestone moment for Prince George, Princess Charlotte and Prince Louis as they started at Lambrook, the first time they have all been at school together.

It also inadvertently captured for the history books a snapshot of the next generation, the tight-knit unit the Duke on Wednesday called “all the gang”. 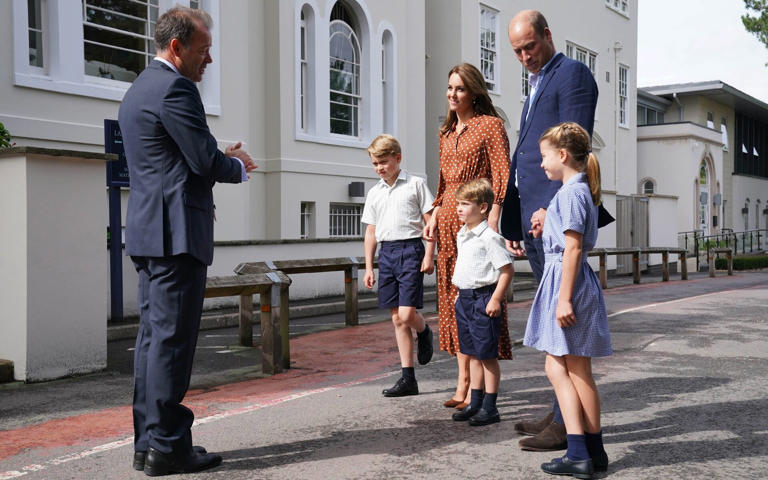 Rarely in recent memory has the monarchy needed such an image of stability, continuity and uncomplicated youth.

Hours after the picture was taken, the Queen – so determined to keep up her duties – was compelled to pull out of a virtual Privy Council meeting after being advised to rest.

The Duke and Duchess of Sussex, just a short journey away at Frogmore Cottage, show little sign of relenting in their quest to tell the world of the Royal family’s shortcomings.

The Cambridges, in other words, are keeping the show on the road.

Fortunately, the three small royals were unconcerned with such matters on Wednesday.

For George, Charlotte and Louis, their first day at a new school was quite enough to be getting on with.

Ready to meet new teachers and new friends, they had the smartly parted hair and polished shoes of any other child embarking on their school careers.

With Prince Louis, the smallest, positioned protectively in the middle with both his mother and father on hand should he need them, all three were the image of calm and confidence as they approached Lambrook.

It is a coincidence that the first day of school comes a week after the Duchess of Sussex told an American magazine that royal children are faced by a barrage of 40 paparazzi in a pen every time they go to school in the UK.

In fact, this was a carefully controlled moment in front of one photographer and one television camera, authorised by the Cambridges to allow the public to celebrate their children’s milestone moments alongside them. 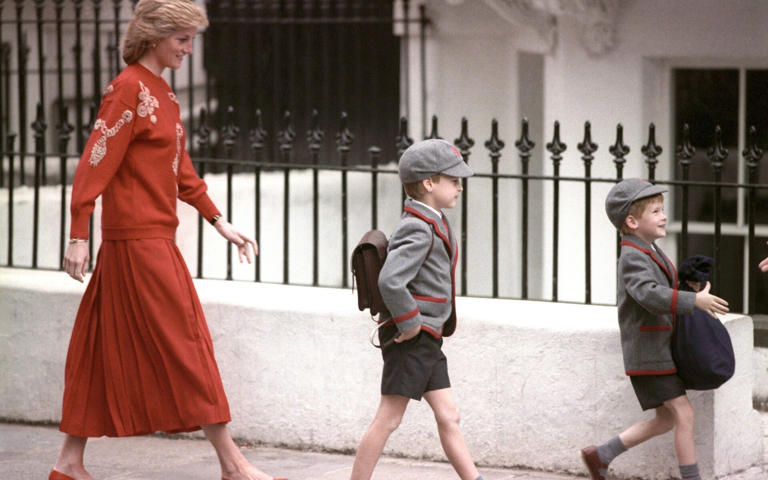 Diana, the Princess of Wales, follows her sons Prince Harry (right) and Prince William on Harry’s first day at the Wetherby School in Notting Hill in September 1989 – Ron Bell/PA© Provided by The Telegraph

The family had travelled together in one car, driven by the Duke in the first school run from their new home at Adelaide Cottage, Windsor.

The Duchess waved enthusiastically through the window to the waiting headmaster, having got to know him well as she went through the long process of finding the right school.

As they stepped out of the car, the quintet walked in a line side by side with the Duke and Duchess keeping up a stream of conversation with the three children, punctuated by laughter.

The boys held hands with their mother, while Princess Charlotte stayed with her father.

Conscious of his youngest son’s very first day of school, Prince William stroked Louis’ hair reassuringly as they walked into sight of the entrance.

If he was fazed by counting a future king and his siblings among his pupils, the school’s headmaster did not show it.

“Welcome to Lambrook,” Jonathan Perry told them, addressing each by their first name only as he shook their hands in turn. 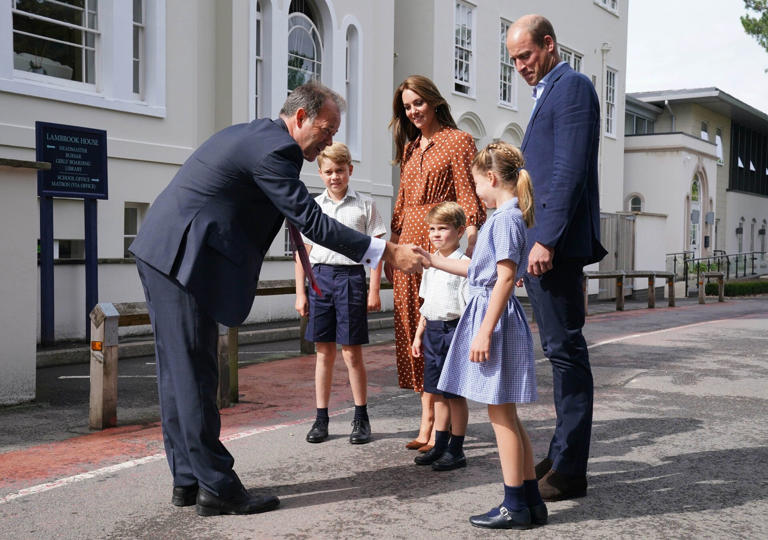 “It’s lovely to have you with us. We’re very excited about the years ahead. Are you excited, children? Looking forward to it?”

All three nodded, piping up “yes!”

The Duke said: “They’re looking forward to it”, adding the children had “lots of questions”.

As they walked up the steps into school together, the headmaster’s wife Jenny Perry – waiting in the doorway as part of her pastoral role at the school – said: “Welcome back to Lambrook.”

“With all the gang!” the Duke replied.

With that, they disappeared into the school to meet fellow new parents and potential friends over refreshments.

Prince George, nine, Princess Charlotte, seven, and four-year-old Prince Louis, who is starting in pre-prep, were welcomed into their own classrooms by their teachers along with the other new starters of this year.

The Cambridges were due to spend around 90 minutes at the school, before starting in earnest on Thursday.

It marks the start of a new stage of their lives, with a move to the Windsor Estate just a stone’s throw from the Queen’s home.

Her Majesty herself, ensconced at Balmoral, will see the photographs from afar after agreeing to rest following a flurry of activity in which she accepted the resignation of Boris Johnson and appointed Liz Truss as the new Prime Minister.

She on Wednesday postponed a virtual Privy Council meeting, intended to be held via videolink.

She was not in hospital, a royal source said, emphasising that there were no constitutional implications for postponing the meeting. 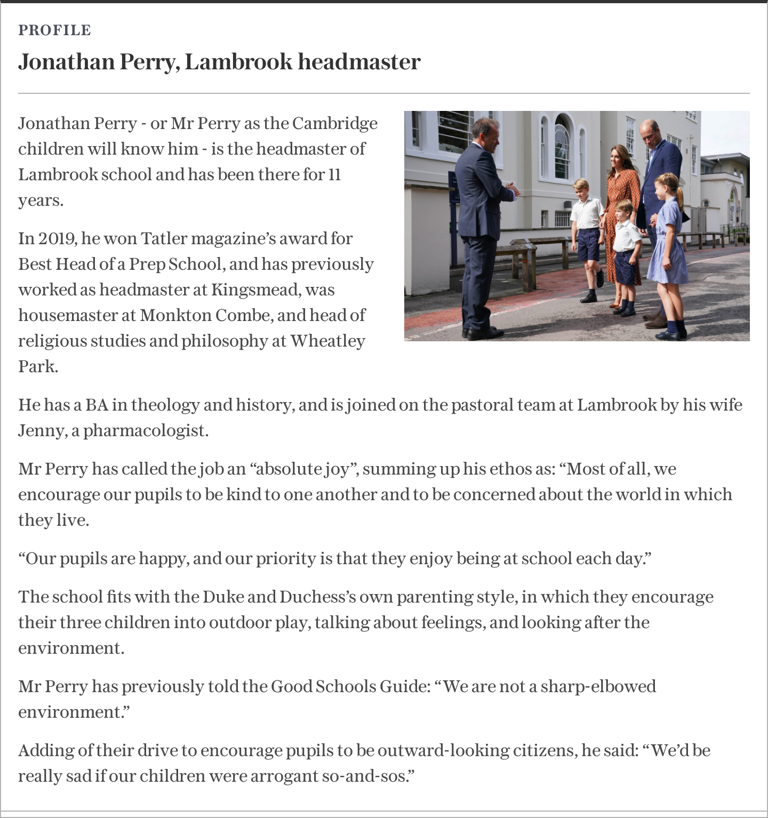 Cambridge© Provided by The Telegraph

At the age of 96, the Queen has been enduring ongoing “episodic mobility issues” which are understood to have got worse over the last few weeks.

The rest of the senior working Royal family have spent the summer visiting her, enjoying picnics together in the Highlands.

The Duke and Duchess of Sussex are not known to have any plans to see her, unless a row over their security can be resolved.

They are currently in the middle of a short trip to Britain, in which the Duchess made a speech at a youth conference detailing how she had found confidence after once believing she did not belong on the world stage.

On Thursday, they will attend the WellChild Awards, where Prince Harry will speak.

The Duke and Duchess of Cambridge, who have made no secret of their focus on their children’s happiness and stability as they balance their duties, will spend the remainder of the week on parenting duty, hearing about George, Charlotte and Louis’ days.

When it comes to the next generation, little could be more important.