• Advocate Tom Macharia told the court that Chebukati relied on falsified Forms 34A to declare Deputy President William Ruto as the President-elect amid glaring errors in most of the forms.

• Macharia described Chebukati’s actions of announcing the results without commissioners’ input as dictatorial, one that the popular sheng phrase would describe as mtado? (what will you do? 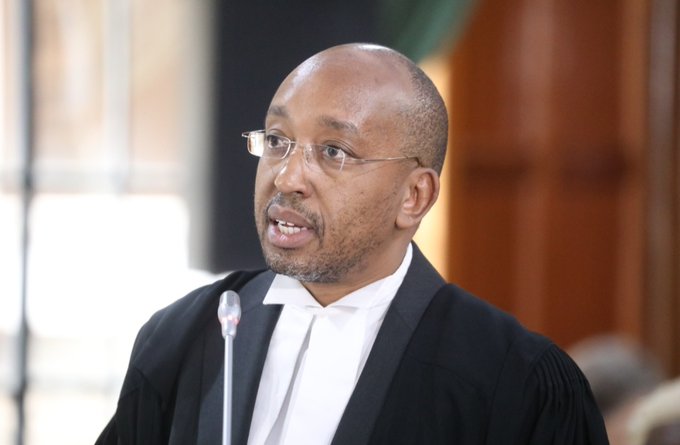 Advocate Tom Macharia told the Supreme Court that Chebukati committed a myriad of illegalities including relying on falsified Forms 34A to declare Deputy President William Ruto as the President-elect.

Macharia described Chebukati’s actions as imperialistic, the kind that the the popular sheng phrase would describe as mtado? (what will you do?).

“Do something,” Macharia told the judges while making his final submissions.

While making reference to the Supreme Court’s verdict in the Maina Kiai case, the lawyer said the IEBC chairperson does not have veto powers in declaring election results without the input of the commissioners.

He said the chairman apportioned himself veto powers against the Constitution.

“The Maina Kiai case conclusively dealt with this matter and put it to rest,” he said.

“Kenyans did not append sweeping powers to the chairman of the Independent Electoral and Boundaries Commission in the 2010 Constitution,” Macharia added.

While highlighting the gravity of Chebukati’s mistake, the lawyer pointed out to the court that an affidavit by Esther Wanjohi, for instance, had 14 Forms 34As which upon scrutiny by the court, eight were found with irregularities, gaps and errors.

“These have gaps and problems including that when you read them with a QR code, the serial number that shows up is for a different polling station. The problems are correction problems, tallying problems on those forms submitted by the commission itself,” Macharia said.

He said similar errors were found in an affidavit filed by Nzika Mwololo and which the commission had submitted as part of its evidence.

“Same problems. He has two forms, 50 per cent of them, which is one, has an incorrect addition where the rejected votes have been added as part of the total.”