Football365:Man Utd ‘in pole position’ for Everton target who admits Red Devils are a ‘serious option’

Premier League side Man Utd are leading the race to sign PSV Eindhoven winger Cody Gakpo this summer, according to reports. 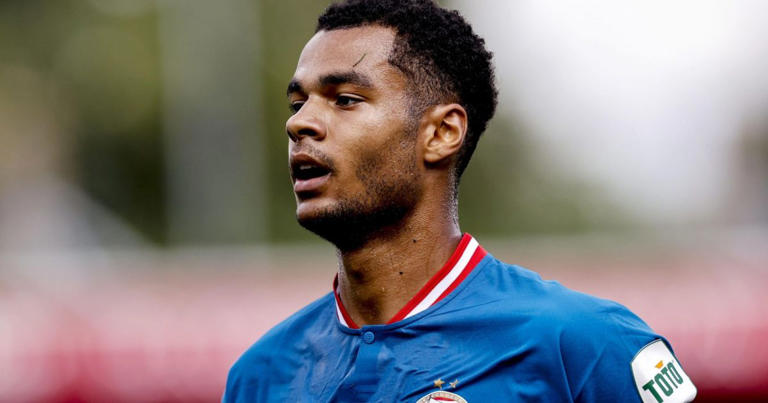 The Red Devils are still looking to add to their squad this summer after making four signings so far this summer in the form of Tyrell Malacia, Christian Eriksen, Lisandro Martinez and Casemiro.

Ajax winger Antony is expected to be the next player through the door after Man Utd reportedly agreed a €100m fee for the Brazil international.

There remains the possibility that Cristiano Ronaldo could leave Old Trafford before the end of the transfer window with the Portugal international making it clear that he wants to leave the club this summer.

If Ronaldo leaves then that could pave the way for Man Utd to add another attacker to their squad before Thursday’s deadline and Gakpo is one name being discussed.

In fact, the player himself claims that a move to Man Utd is now a “serious option”, Gakpo said: “There are also other options, United are a serious option. I can hear it all. I try to shut myself off from it, but it’s difficult.”

And now a report in Dutch newspaper De Telegraaf (via Sport Witness) claims that Man Utd ‘seem to be in pole position’ for Gakpo, who has started the season in brilliant form.

The Netherlands international has contributed three goals and three assists in his first three Eredivisie matches of the season after providing 12 goals and 13 assists last campaign.

De Telegraaf reckons Gakpo could be ‘playing Russian roulette’ with his future by moving to the Premier League as Man Utd circle.

PSV Eindhoven boss Ruud van Nistelrooy admits he is “not happy” about the situation brewing around Gakpo’s future so close to the end of the transfer window.

Van Nistelrooy told ESPN: “Your best players may still be bought out now, but you can’t do anything beforehand. Each day that passes, the time to respond is shorter. It remains to be seen whether it will be possible to find a replacement at all. We have to make the most of it.”

Football Insider claimed earlier today that Everton are lining up a bid for Gakpo too with the future of Anthony Gordon up in the air at Goodison Park.

Everton ‘are bidding’ for Gakpo, according to the report, as Chelsea ‘go to huge lengths to sign’ Gordon this summer.