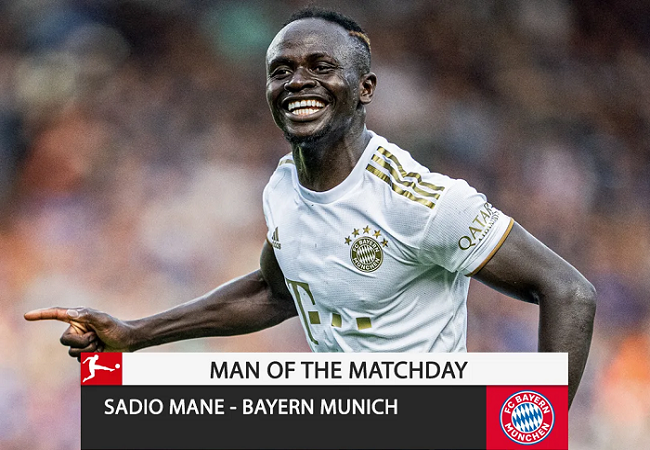 Bayern Munich continue their perfect start to the Bundesliga season demolishing Bochum 7-0 on Sunday with Sadio Mane scoring two goals including one from the penalty spot.

Despite never scoring a penalty during his time in the Premier League, Mane converted from the spot in the 60th minute. And it looks as the Senegalese international has replaced the departed Robert Lewandowski as the Bavarians’ designated penalty taker.

Former Man City forward Leroy Sane, making his first start of the season, opened the scoring after four minutes, nonchalantly curling a strike into the top right of the net from the edge of the penalty area.

Bayern’s energy and pace continued to trouble Bochum, with Dutch defender Matthijs de Ligt celebrating his first goal in Bayern colours after heading in a cross in the 25th minute.

Replays showed the ball went in off de Ligt’s arm. But after a short VAR review, the goal stood.

Kingsley Coman added a third after 33 minutes before laying on Mane’s opener in the 42nd minute.

After Mane’s penalty made it 5-0, Bochum defender Cristian Gamboa scored an own goal while trying to keep the ball away from the feet of Sane with 69 minutes gone. And Serge Gnabry added Bayern’s seventh in the 76th minute.https://kmaupdates.com/

Bayern, who surprisingly lost 4-2 in the corresponding fixture last season, reclaimed top spot in the table.

They are the only Bundesliga team to have won all three of their opening matches.