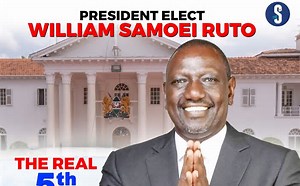 Bomas, Kenya: Kenya’s Independent Electoral and Boundaries Commission (IEBC) Chairperson Mr. Wanyonyi Wafula Chebukati at 6:05pm officially declared William S. Ruto the next 5th President of Kenya after he collected 50.49% of the total votes cast and fulfilling the 50%+1 vote as prescribed in the Kenyan Constitution.

Ruto’s runningmate Rigathi Gachagua has also been declared Deputy President after he won the MP Seat and seeing his candidate through.

In his statement, H.E Ruto lauded Kenyans for raising the bar and abhoring tribal carcoons.

Ruto sounded praises to IEBC for being the hero of Kenyan Politics this evening.

Ruto: “Wafula is soft spoken but firm, Mr. Chairman, by you publicizing all forms was a game changer”.

“I thank my family and friends and backink through this struggle that has seen us succed”. Ruto.

“Some people might be wondering about this because of worse things they done against us, i must tell them that there is nothing to worry about, there is no time for revenge all we need is to work towards the furure of our country”. Ruto remarked.