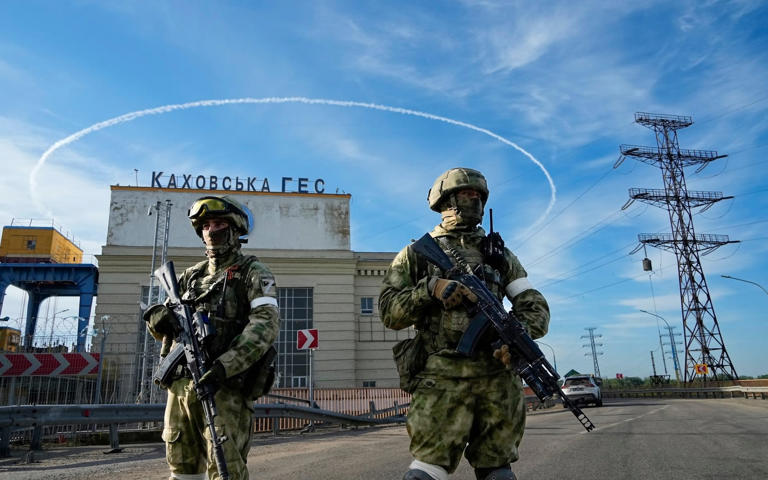 Vitaly Kim, the governor of Mykolayiv district, said the entire Russian command staff was retreating from the west bank of the Dnipro river that flows through the occupied city of Kherson in the south east.

If confirmed, that would leave an estimated 20,000 or more Russian soldiers isolated from their commanders and cut off from supply lines by the half-mile-wide river, over which the main bridges in the Kherson region have been damaged by Ukrainian attacks.

“I feel just a bit sorry – but not much – for the stupid orcs who had been abandoned on the right bank of the Dnipro,” Mr Kim said in a message posted to the Telegram social media app, using his favoured derogatory term for Russian soldiers.

“All of the commanders are moving to the other side.”

Early in Vladimir Putin’s invasion of Ukraine, Russian forces surged north from the annexed Crimean Peninsula and quickly seized territory to connect with separatist enclaves in eastern Ukraine. They also advanced westwards, hoping to link up with pro-Russian separatists in Moldova, creating a landbridge that would entirely cut off Ukraine from the Black Sea.

While Russian forces seized Kherson, the only regional capital to have fallen in the invasion, their advance halted east of Mykolaiv, leaving a vulnerable pocket of Russian-controlled territory sandwiched between frontlines, the wide Dnipro River to the east and the Black Sea to the south.

Since then Ukrainian forces have repeatedly targeted the bridges across which nearly all Russian resupplies must pass.