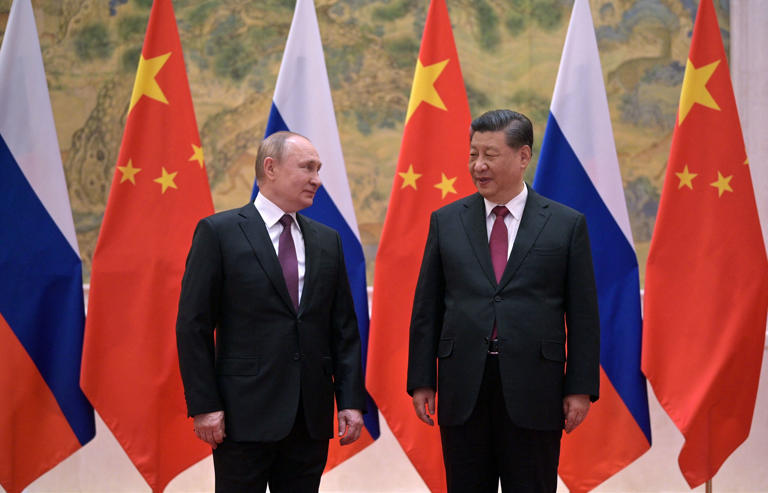 Editor’s note: The opinions in this article are the author’s, as published by our content partner, and do not represent the views of MSN or Microsoft.

The autocratic leaders of China and Russia seem to be withdrawing further into the same corner. The Russian invasion of Ukraine has made Russian President Vladimir Putin persona non grata throughout Europe and isolated the Kremlin from Western capitals, where governments have unfurled a series of sweeping anti-Russian sanctions.

China under President Xi Jinping, meanwhile, is hardly a global pariah. But its escalation of military exercises around democratic Taiwan, its expanding naval footprint throughout the Pacific and its ruthless crackdowns in Hong Kong and Xinjiang are all pushing Beijing down a geopolitical collision course with the United States and its allies.

A few weeks before Russia launched its war, Putin and Xi met at a summit and declared a partnership with “no limits.” Now, after a summer of spiraling tensions, their governments are locked in a tighter embrace, voicing their shared animus toward the American hegemon that looms over their own perceived spheres of influence.

This week, Zhang Hanhui, China’s ambassador to Moscow, attacked the United States for supposedly stoking the conflict in Ukraine. “As the initiator and main instigator of the Ukrainian crisis, Washington, while imposing unprecedented comprehensive sanctions on Russia, continues to supply arms and military equipment to Ukraine,” Zhang told Russian state news agency Tass. “Their ultimate goal is to exhaust and crush Russia with a protracted war and the cudgel of sanctions.”

Earlier, Dmitry Peskov, Putin’s press secretary, had lambasted Washington for House Speaker Nancy Pelosi’s controversial visit to Taiwan. “This is not a line aimed at supporting freedom and democracy,” Peskov said. “This is pure provocation. It’s necessary to call such steps what they really are.”

Some analysts, though, are starting to point out what the Sino-Russian relationship really has become. Putin may be possessed by neo-imperial dreams of Russia’s place in Europe, but he is presiding over a state of affairs that has steadily given Beijing more leverage over Moscow. Far removed from the days of the Cold War when the Kremlin viewed communist China as its “poorer cousin,” Russia — isolated and enfeebled — is sliding inexorably into the role of “junior partner” to the Asian giant.

That’s the argument made in a recent Foreign Affairs essay by Alexander Gabuev, senior fellow at the Carnegie Endowment for International Peace.

The war in Ukraine has rendered Russia increasingly dependent on China: Sanctions have curtailed the global market for its exports and thinned out possible suppliers for its exports. Enter China, whose imports from Russia have surged, jumping 80 percent in May compared with last year, largely in the form of oil and other natural resources. The Russian market, left bereft of many European products, may get all the more flooded by Chinese goods and technology in the months and even years ahead.

Gabuev suggested that current trendlines could see China’s renminbi, which has already outperformed the euro on Moscow’s stock exchange, becoming “the de facto reserve currency for Russia even without being fully convertible,” and thereby “increasing Moscow’s dependence on Beijing.”

Imbalances that already existed between both countries are only amplifying. China is edging closer to Russia as a leading arms supplier to developing countries. Russia was compelled to significantly discount oil sales to China, while Chinese car manufacturers — recognizing the paucity of options now facing Russian consumers — have in some instances raised prices for their vehicles in Russia by 50 percent. Beijing is trying to avoid falling afoul of Western sanctions on Russia but still has plenty of scope to tighten its tethers around Russia’s economy.

“The war in Ukraine has accelerated these inequalities in their economic relationship and confirmed Russia’s subservience to Beijing,” wrote Thomas Low and Peter W. Singer in Defense One. “China has refused to turn its back on Moscow, but it hasn’t refrained from cashing in on its ally’s plight either.”

Gabuev unpacked the geopolitical ramifications of Russia’s supplication to China. “To keep China happy, Russian leaders will have little choice but to accept unfavorable terms in commercial negotiations, to support Chinese positions in international forums such as the United Nations, and even to curtail Moscow’s relations with other countries, such as India and Vietnam,” he speculated.

Even in the remote scenario where Putin himself falls, it’s hard to imagine the broader tectonic realignments taking place would shift all that much. “Russia is turning into a giant Eurasian Iran: fairly isolated, with a smaller and more technologically backward economy thanks to its hostilities to the West but still too big and too important to be considered irrelevant,” Gabuev wrote.

With China as Russia’s biggest external partner and major diplomatic ally, Gabuev concluded, “the aging ruling elite in the Kremlin, myopically fixated on Washington, will be even more eager to serve as China’s handmaidens as it rises to become the archrival of the United States.”

Some hawkish commentators in the West argue that U.S. and European political elites have for too long not believed in the threat posed by this putative illiberal alliance. “Until the West’s disbelief is replaced by a determination to resist, the Russian and Chinese dictators will keep pressing on, planning their major assaults and dreaming of future victories,” Andrew Michta wrote for the Wall Street Journal’s right-wing opinion section.

In the initial wake of Russia’s invasion, some Western pundits entertained the possibility that China, too, would join the punitive measures deployed against the Kremlin, or at least do little to support a flailing Russian economy. Few hold out such hope now. On Thursday, in a sign of China’s own sinking clout in Europe, Estonia and Latvia withdrew from a “cooperation group” of sixteen central and eastern European countries convened by China.

“The best way for the West to deal with the China-Russia alignment is to acknowledge that these bonds are strong and to improve its own resilience and deterrence capacities,” wrote Justyna Szczudlik, a China analyst at the Polish Institute of International Affairs.