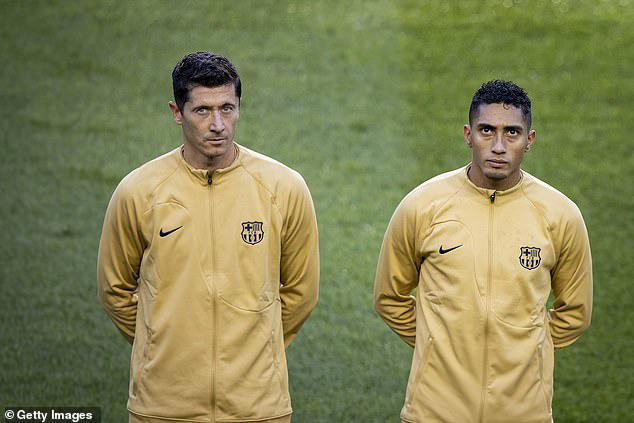 Who better to sum up the shambolic mess at FC Barcelona than club president Joan Laporta?

‘We have passed from a terminal illness, now we are in the intensive care unit,’ he said earlier this summer.

‘We need to activate financial levers to move us back into the ward and out of the hospital.’

Football’s grandest institution, a whopping £1.14billion in debt, is crumbling.

And, with just two days until Barcelona kick off their league season, the club are prohibited from registering their five summer signings by LaLiga – about £140million worth of players. Yes, you read that right: a club more than £1bn in the red has made a trolley dash to spend more money than any team in Europe, with signings such as the prolific striker Robert Lewandowski from Bayern Munich and former Leeds talisman Raphinha.

Fans on social media have compared the club to a friend who says they’re unable to pay you back the £20 they owe you -then you see them spending freely at the pub on a Friday night.

Or as Bayern Munich boss Julian Nagelsmann put it: ‘The only club that has no money but buys every player they want. It’s crazy, kind of weird.’ But enough of the analogies and Laporta talking in riddles.

How did a club steeped in such a rich history get to the precipice of extinction? And why have they seemingly decided that the way out of the crisis is to spend, spend, spend?

The image will haunt Barcelona fans: Lionel Messi, the club’s greatest ever asset and the greatest footballer ever to walk the planet, wiping away tears as his upper lip quivered in sorrow and grief during his forced goodbye for Paris Saint-Germain.

Over the four years from his final contract extension in 2017, the club paid Messi more than £460m.

As his salary tripled within 10 years, the team whose motto is mes que un club became more like Messi’s Club. The Argentine could voice discontent about a coach and, within days, the coach would be sacked. New managers would come in and turn to him at half-time, ‘What would you do, Leo?’.

Jorge Messi knew his son’s worth and, as agent, negotiated yearly pay hikes. Presidents agreed to each one without hesitation – if they didn’t, their tenure as supremo would be short-lived.

So Messi’s salary shot up and the salary hikes were almost contagious as team-mates demanded similar.

They already had performance-based bonuses in their deals but Bartomeu agreed to slapdash pay rises.

Messi, through no fault of his own, was both their greatest asset and a parasite. Twenty-one years after signing his first contract on a napkin – as Jorge felt the offer was too good to be true so immediately needed it in writing – Messi was forced out to protect the future of the club as Covid wreaked financial havoc.

Some suggested that Messi should accept a huge wage cut if he loved the club so much, but Spanish employment law prohibits anything but marginal salary reductions.

In truth, the club’s decline started long before Messi’s teary departure. Some point to the £198m sale of Neymar in 2017, also to PSG.

They spent the money on Ousmane Dembele and Philippe Coutinho, both relative flops. Scouting departments have failed and La Masia, the famed academy, had stalled until recently.

So when Laporta became president for a second time last year, he was met with a decision to make: sell off more of the club’s key squad members – and with it, as he said, ‘fade into years of irrelevance’ – or invest in the team.

Club insiders call it a ‘virtuous circle’ – a gamble that investing in the team and having a ‘brand’ on the pitch will make everything else tick financially. Which brings us back to the present day and Lewandowski, who scored 344 goals in 375 games for Bayern Munich.

Despite being 33 years old, he is Barcelona’s boldest signing since they sold Neymar but they cannot register him due to LaLiga’s financial fair play rules.

In Spain, spending caps are preventative rather than punitive as seen elsewhere in Europe.

The league insist Barca must raise around £85m before Saturday’s clash with Rayo Vallecano if they are to register Lewandowski and Co.

The club have survived this summer by activating economic levers, or palancas, to raise money.

They have sold future TV rights – paid club-by-club in Spain rather than to the league as a whole – and a quarter of their in-house TV company, Barca Studios. The club are effectively mortgaging their future. There’s also the ludicrous saga with Manchester United and Chelsea target Frenkie de Jong, who joined from Ajax in January 2019 but was given a new deal 18 months ago by the previous president.

Barca say that contract is illegal as it includes deferred payments. They want him to return to his original deal which, of course, is on much lower terms.

Aside from all this mess, there is some romance still at Camp Nou – and not just because it is available for hire as a wedding venue in a way to raise cash.

Manager Xavi, central to Pep Guardiola’s great team from 2008 to 2012, is doing a fine job. He took over with the club in ninth and led them to runners-up. Now the club must activate Operacion Salida – a plan in which they sell fringe players to free up wages, with Memphis Depay and Samuel Umtiti on the verge of leaving.

They are being dubbed FC Palanca in local media, or Financial Levers FC. Those levers mean the club is expected to be permitted to register some, but not all, of their new players by Saturday.

The levers may work for now but, as one club insider puts it, ‘We can eat well today, but tomorrow we are starving’.

Barcelona are in a MESS and cannot register their new signings (msn.com)