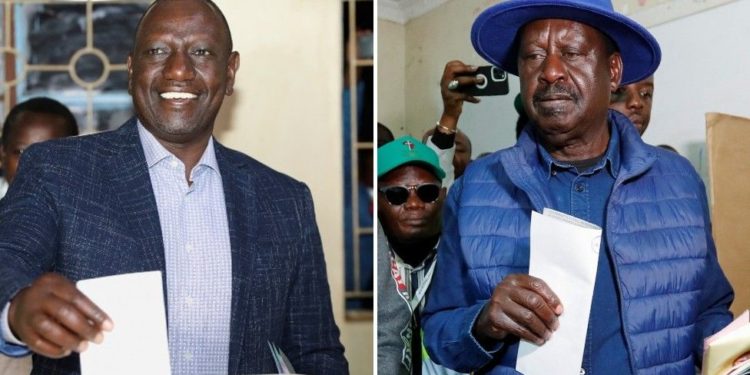 Voting on Tuesday was largely peaceful but the turnout was low, with only 30 percent of the registered 22 million voters showing up as of noon (09:00 GMT), six hours into the vote.

With more than 90 percent of results posted from thousands of individual districts, local tallies of the raw data suggest little separates the pair.

A largely peaceful election day was marred by logistical delays and a failure of these identification kits in some parts of the country.

At his latest briefing, Mr Wafula  Chebukati, head of the  Independent Electoral and Boundart  Commission (IEBC)  said the commission had received 97 percent of presidential results sent in electronically, but official tallying would not begin until the physical results were received for verification.

The two frontrunners in the presidential race are seasoned politicians. Mr Odinga, 77 – a long-serving opposition leader, nicknamed Baba (“father”) by his supporters – is running for president for a fifth time.

Ruto, 55, who has tried to emphasise his connection with ordinary Kenyans by calling himself a “hustler”, is taking his first stab at the presidency.

Two other candidates – David Mwaure and George Wajackoya – are also in the race.

Outgoing President Uhuru Kenyatta is backing Odinga, a foe turned ally, to succeed him, after a falling out with Mr Ruto.

After counting the votes, local officials take a photo of the final tally sheet and send the image to both the constituency and national tallying centres.

The media, political parties and civil society groups have been compiling their own tallies using these final results declared at the more than 40,000 polling stations.

But only the electoral commission can declare the winner of the presidential election after verifying the physical and digital forms sent to the national tallying centre. It has seven days to announce the result.

Meanwhile, the Regional Centre for Governance and Security Policy (RCGSP) has said Kenya has made tremendous democratic progress since the reintroduction of multi-party elections

The centre in a letter signed by its chairman, executive board, Jonathan Sandy to presidential candidate, Azimio La Umoja Coalition, Rt Hon Raila Odinga, also commended the efforts made towards achieving the feat.

Sandy described the efforts as a great step towards good governance in Africa everyone anticipated.

As an anchor for stability, security, good governance, and democracy across the globe, he stated that Kenya stands at an advantageous position to take the lead in advancing the discourse on the consolidation of democracy on the African continent.

“It is in this pan-African spirit that I, like others across the world, look forward to a free, fair and peaceful election and may Azimio la Umoja Coalition carry the day,” he said.