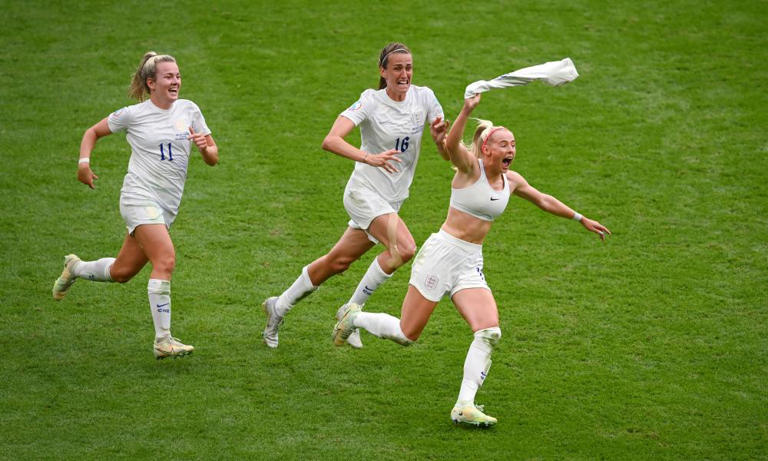 Chloe Kelly was the toast of England on Sunday night after scoring the Lionesses’ winning goal at Wembley 10 minutes from the end of extra-time in the 2-1 win over Germany, but it was touch and go whether she would even be selected for the Women’s Euros. The Manchester City winger suffered an anterior cruciate ligament injury in May last year that not only ruled her out of the 2021 Olympic Games in Japan, but caused her to struggle mentally during the ensuing season, in which she returned for her club only late on.

Kelly has impressed throughout this tournament as an impact sub, but never has she made such a huge impression as she did in the final of this tournament in front of a record 87,192 crowd as she stabbed the ball over the line at the second attempt after Lauren Hemp’s corner deflected towards her off Lucy Bronze.

The 24-year-old grew up a No 92 bus ride away from the national stadium and used to come down to FA Cup finals to buy a programme and get a buzz off the “vibe around Wembley”. Last night she gave English women’s football its biggest ever jab in the arm as the lid came off Wembley after she wheeled away, taking her England shirt off in celebration after her close-range finish, her first goal of the tournament.

“Oh my God, look at them – it’s amazing,” she said after the match. “Thank you to every single person who came out to support us. This is unreal. This is what dreams are made of. As a young girl watching women’s football and now this, wow, it’s unbelievable.

“Thank you to everyone who played part in my rehab, because I always believed I could be here, but to score the winner … wow. These girls are special, the manager is special and what a special group of staff. This is amazing. All my family are in the crowd. My mum, all my brothers, my sister, all my nephews, everyone. I just want to celebrate.” © Provided by The GuardianKelly in action during the FA Cup final between Chelsea and Manchester City in May. Photograph: Tolga Akmen/EPA

The youngest of seven siblings, Kelly has spoken of being “toughened up” by her five brothers. “If I was on the floor, it was: ‘Get up or you don’t play with us,’” the former Arsenal and Everton wide player said. “So they definitely shaped me into who I am today, and I appreciate that.”

The graduate of Elthorne Park high school also benefited from playing in the cages around Ealing. “I had to hold my own, [with] the physicality and the creative side, because you have to get that yard on someone – and the skill side of it. I loved it,” she said. “I think I have carried that throughout my career.” This toughness helped Kelly – a bronze medal winner with England at the 2018 Under-20 Women’s World Cup in France, alongside fellow team-mates Lauren Hemp and Georgia Stanway – through the 2021-22 season that was decimated by injury before she played in the Women’s FA Cup final defeat by Chelsea in May.

“When something like that happens and you’re away from the game for so long, nothing really fazes you after,” she said. “I used to get quite nervous before games. Now I don’t really have those nerves because I’m thinking: ‘What’s the worst that can happen?’

“I’ve been through the worst. I have to enjoy every moment, playing with no fear.” Kelly has become accustomed to coming on for England this tournament, appearing as a substitute in all six games, justifying Sarina Wiegman’s faith in her after she claimed a pre-tournament goal in a 3-0 victory over Belgium. But nothing can match the fearless contribution she has made to the history of the game now