The visit of Russia’s Foreign Minister Sergei Lavrov to Africa is part of Russia’s ongoing charm offensive on the continent. Russia’s Foreign Minister Sergei Lavrov is on a four-nation tour of the African continent. After visits to Egypt and the Republic of the Congo, he landed in Uganda on Tuesday and will continue onto Ethiopia.

Like many African nations, Uganda, Ethiopia and Congo have remained neutral on Russia’s war in Ukraine, with all three either abstaining or being absent during the UN’s March General Assembly vote condemning Russia’s attack on Ukraine.

In a statement published in newspapers in the four countries he is visiting, Lavrov praised Africa for resisting what he called “undisguised attempts of the US and their European satellites” to impose a unipolar world order.

“We appreciate the considered African position as to the situation in and around Ukraine,” he wrote in the column. He also praised the “independent path” of African countries in not joining sanctions against Russia despite what he called “unprecedented” Western pressure. The reservations of many Africa nations in taking sides over the war in Ukraine were highlighted back in April when the UN General Assembly voted to suspend Russia’s membership of the Human Rights Council.

Only 10 out of 54 African states voted in favor of the resolution, whereas nine were opposed, and 35 abstained or were absent.

This is considerably less than the 28 African countries who supported the UN’s resolution held in March that called for Russian troops to withdraw from Ukraine “immediately, completely and unconditionally.” 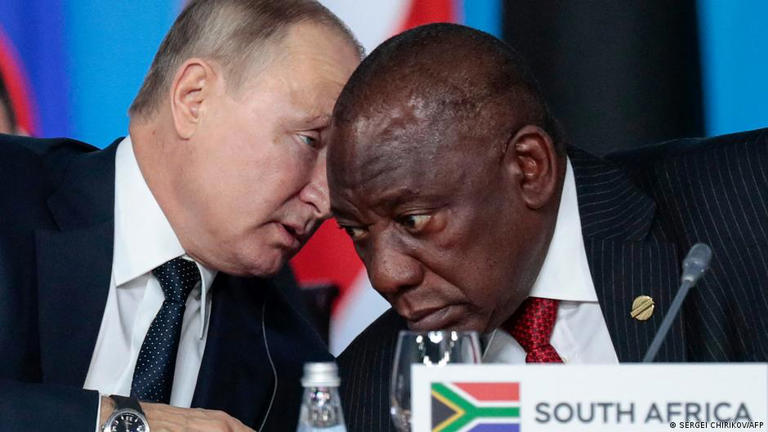 © SERGEI CHIRIKOV/AFPSouth Africa’s President Cyril Ramaphosa, seen here with Putin in 2019, says he is taking a neutral stance on Russia’s war on Ukraine

On the wrong side of history?

The muted response to Russia’s invasion of Urkaine back in March generated some fierce criticism, especially from intellectuals, diplomats and opposition politicians in South Africa.

“The refusal to condemn this war puts South Africa on the wrong side of history,” said Herman Mashaba of the newly formed opposition party, ActionSA, at the time.

Mashaba said it was obvious that Russia’s invasion of Ukraine was a “violation of international principles of law” and accused South Africa’s ruling African National Congress (ANC) of refusing to cut ties with Russia, a historical ally.

President Cyril Ramaphosa subsequently defended his government’s decision to abstain from voting on the UN resolution.

In a statement shortly after the UN vote, Ramaphosa said that the resolution failed to emphasize the role of peaceful dialogue in stopping the war, which is why South Africa couldn’t support it.

Angolan political scientist Olivio N’kilumbu said many in the ANC are still loyal to Russia.

“Some are of the opinion that the former liberation movement still owes the Russians a lot since the days of the Cold War, and now we Africans have to shut up about the Russian invasion,” he told DW.

Russian propaganda aims to “revive the old connections between the Soviet Union and liberation movements” in many African countries, including South Africa, he said.

One example of this is a March tweet from Russia’s Embassy in South Africa, which thanked South Africans who had expressed their solidarity with Russia’s fight against what the tweet refered to as “Nazism in Ukraine”.

Germany’s embassy in South Africa quickly responded with a tweet of its own.

“Sorry, but we can’t keep silent on this one, it’s just far too cynical. What Russia is doing in Ukraine is slaughtering innocent children, women and men, for its own gain. It’s definitely not ‘fighting Nazism’. Shame on anyone who’s falling for it,” says the German reaction, which ends with a statement in brackets: “Sadly, we’re kinda experts on Nazism.”

Some pointed to the Soviet Union’s support for South Africa’s apartheid liberation struggle while others sided with Russia’s justification for the invasion of Ukraine or were critical of Germany’s colonial history in southern Africa.

One user writes: “Russia is only opposing NATO’s advance into Ukrainian territory. The consequences of this expansion were clear and NATO decided to ignore them. This war was foreseeable and avoidable.”

Another user asks: “What did Germany do in Namibia?”

Political scientist N’Kilumbu said that Russia’s propaganda is also directed at other African countries, especially in the south of the continent, whose liberation movements have political and military support from the former Soviet Union.

By abstaining from voting on the UN’s Ukraine resolution, countries like Angola, Mozambique, Zimbabwe and Namibia had this “historic friendship in mind,” N’Kilumbu said. 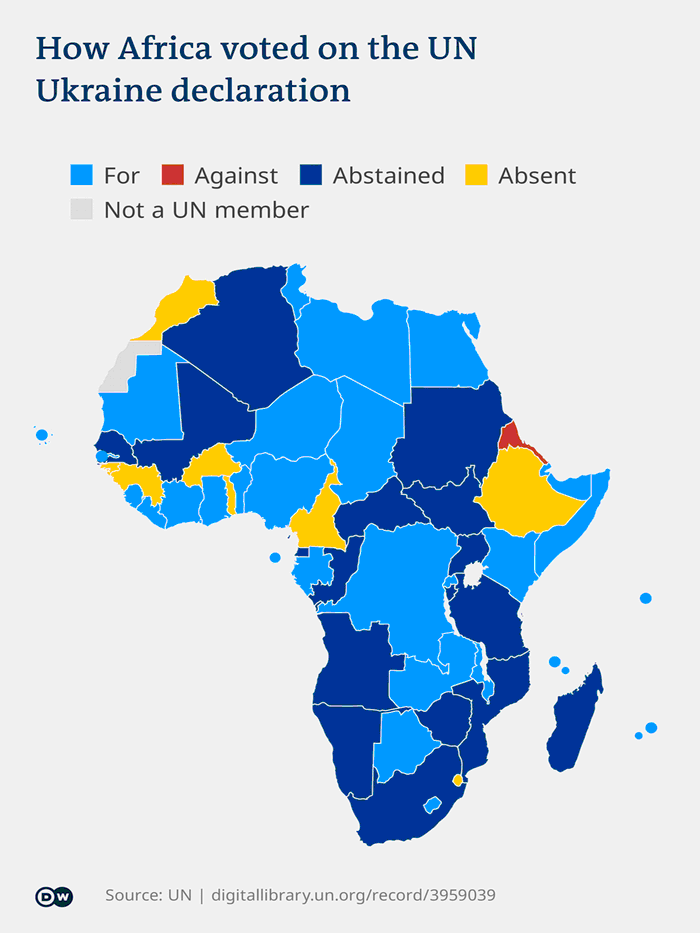 “Especially in Angola and Mozambique, there has been virtually no political change since the Cold War era. And that’s why the umbilical cord that connects these countries to Moscow has never been severed,” said N’Kilumbu.

The People’s Movement for the Liberation of Angola (MPLA), for example, continues to maintain close ties with Russia’s military, business and political elites, N’Kilumbu points out.

“At the military level, we still have Russian instructors. Our military academy is Russian-influenced,” he said.

In recent years, Russia has increasingly used this historic Soviet connections to expand its political, economic and, above all, military relations with African nations.

According to a 2020 analysis by the peace research institute SIPRI, between 2016 and 2020 around 30% of all arms exported to sub-Saharan Africa countries came from Russia.

This increased the volume of Russian arms shipments by 23% over the previous five-year period. Nowhere on the continent has Russian influence grown as rapidly as in the Central African Republic (CAR).

The intensified cooperation between the two nations began in 2017, when Russia delivered weapons, including Kalashnikovs and surface-to-air missiles, to the war-torn country for the first time.

Since then, Russia has gradually increased its presence in CAR.

In 2018, Russian military advisers were dispatched to CAR with the official aim of training local armed forces.

Meanwhile, numerous Russian companies have received licenses to mine gold and diamonds in the country while its President, Faustin-Archange Touadera, is now guarded by Russians.

Given Moscow’s ties to the nation, it is unsurprising that a pro-Russia rally took place in the capital Bangui after the UN’s March vote, said political scientist Olivio N’Kilumbu.

Demonstrators held up placards with slogans such as “Russia, CAR is with you” and “Russia save Donbas”, a reference to a region in eastern Ukraine where Russian-backed separatists have been fighting Ukrainian forces since 2014.

‘Wagner is in Mali’

Russia has also expanded its presence in crisis-ridden Mali.

The Russian private military company Wagner has been present in Mali since the end of 2021, according to independent observers and media investigations.

The Guardian newspaper cited seeing internal Malian army documents that refer to “Russian instructors” who are on “mixed missions”.

In Mali, Wagner mercenaries have been linked to a series of incidents resulting in the killings of hundreds of civilians.

In the most serious case, Malaian forces together with Wagner soldiers reportedly killed at least 350 people in a four-day massacre the village of Moura in March.

Rights groups have expressed their concern that the activities of the Wagner group are linked to atrocities in Mali, as well as elsewhere in Africa.

Wagner mercenaries have also played a role in Mozambique, Sudan and CAR.

Although the Kremlin has denied links to the Wanger group, analysts often point to its close ties to the Russian government.

“Its management and operations are deeply intertwined with the Russian military and intelligence community,” finds the Center for Strategic and International Studies, a Washington-based think tank, in a 2020 analysis.

“The Russian government has found Wagner and other private military companies to be useful as a way to extend its influence overseas without the visibility and intrusiveness of state military forces.” 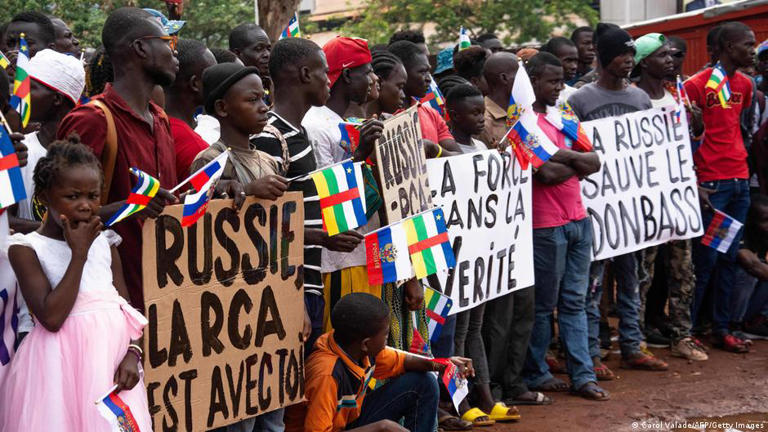 Guinean writer and intellectual Tierno Monenembo believes that many African states will never free themselves from Russia’s grip, especially given their increasing reliance on Moscow’s military prowess.

Against this backdrop, he said, the decision by 25 African states not to condemn Russia’s invasion of Ukraine during the March UN vote is understandable.

“In such a situation, it is difficult for African nations to take a stand,” he said. “When you are small, when you are weak, if you’re poorly armed and underdeveloped, you don’t just get involved in a conflict between military superpowers. That’s the business of the big players.”

He added: “There is a Fulani proverb that says: ‘The chicken doesn’t need to discuss the price of the knife. Whoever is in possession of the knife — that is who will cut the chicken’s throat.”

This article was originally written in German. It was updated on July 26 to include current events.