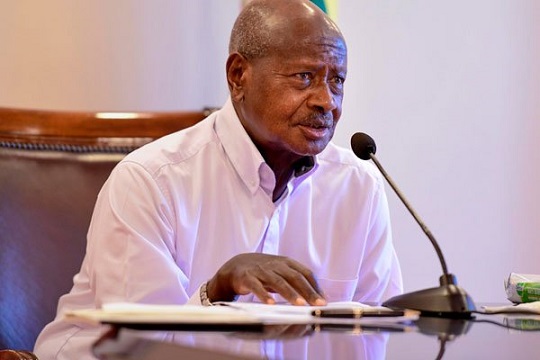 According to the Presidential Press Secretary, Lindah Nabusayi, the address will be broadcast on all media platforms, starting at 8:00pm.

“President Mueveni will address the Nation tomorrow, July 27, 2022 at 8:00pm, from Nakasero State Lodge on issues of national importance. The address will be broadcast live from all TVs and radios,” Nabusayi said.

This will be the second address to the nation in one month following the July 20 address where he explained a number of issues such as the recent rising commodity prices, fuel prices and the need for citizens to get vaccinated against COVID-19.

In his July 20 address, Museveni noted that the short and long-term solution to rising fuel prices is for the country to switch from petrol and diesel vehicles to electric cars. ;

Museveni also rejected the idea of subsidising and tax cuts, noting that they will drain the country’s $4b foreign reserves without curing the mistake and consequences caused by what he described as “people trying to be like God”.

“When people try to be like God, they get bad consequences and that’s what I have come to tell you about today,” he said.

“With high prices of fuel, shortage and high prices of palm oil, fertilizers, ideas started coming; cut taxes! Subsidize! But do you know that there’s a difference between high commodity prices and shortage of commodities? So, which is better? Shortage or high prices? Taxes are meant for development. We want to build new roads and other projects and when we cut taxes or subsidize commodities, the projects are stopped and money is taken for eating and buying fuel to drive cars,” he said.

“If you subsidize or cut taxes, you mislead people. They get used and stop living within their means and in the end, you may transform high prices into total shortage. Like Sri Lanka; that country is fairly developed but because of some mistakes, they are now in trouble,” he added.

Mismanagement of nature and the resultant climate change-related complications are the other things that Museveni condemned, noting that the creation story as captured in the Bible, is a testament that God demarcated the world with a purpose.

“The medium- and the long-term answer is electric cars and using the train. We are now repairing the railway. Once people get tired of the expensive diesel and petrol, they will shift to train. So, it is better we put emphasis on that so that we start using the train for cargo and even passenger so that we spend less on this expensive fuel,” he said. ;

The fuel pump price is now at sh679 per litre depending on where one fuel from.

“Electric buses and motorcycles are the answer to the current fuel crisis. The best way is to start moving away from petrol to electric cars like our Kira buses. The engineers told me they need sh20 billion to make more electric buses,” he said.

The fuel prices, Museveni said, are not likely to go down in the near future even if the war between Ukraine and Russia ends.

“It is not likely to go down because of this fear that petroleum is going to be phased out, and therefore, we don’t have to look for new fields; we only remain with old reserves.

It is good for us because we have got a lot of oil, but now, it is a problem,” he said, noting that at a recent G-7 summit, leaders resolved that there should be a switch from fuel-engineered vehicles to electric ones, a move that threw panic within the fossil oil sector globally.

Instead of spending money on these existing problems such as high commodity prices, Museveni said, Ugandans should learn to live within their means and then migrate to better solutions. ;

“The biggest danger you have is that you can no longer have plenty. To think, that you can have plenty in this type of condition, it is like a man who was told the house is on fire, and he said, prepare a bed for me to sleep.

As a freedom fighter when I see such a trend, I say, we should migrate to something else, and not subsidise this danger to create an artificial comfort for the people to think that things are normal,” he said.

On commodity prices, the President welcomed the ideas fronted by the Minister of Agriculture, Frank Tumwebaze, to support large-scale farmers to produce more grain backed by irrigation, and also help the small-scale farmers under the Parish Development Model to venture into commercial farming.

The President also implored Ugandans, especially the political elites, to avoid lies, parasitism tendencies and the problem of not having a vision, noting that some people are against value-addition for coffee yet it is important that Uganda adds value to every export out of the country.

“We had a big argument about producing roasted coffee, ground coffee and packaged here in Uganda. There was a debate in Parliament where people were just telling lies. And those who were telling lies are the parasites,” he said, noting that instead of getting $30 per kilogram of coffee, Uganda gets $3 because it exports raw coffee.

“Someone told me that Switzerland is getting about 2b dollars from coffee which they don’t even grow, they just roast ours,” he added.

SUPPORT THE POLICE TO MAKE SOUTH AFRICA A SAFER PLACE