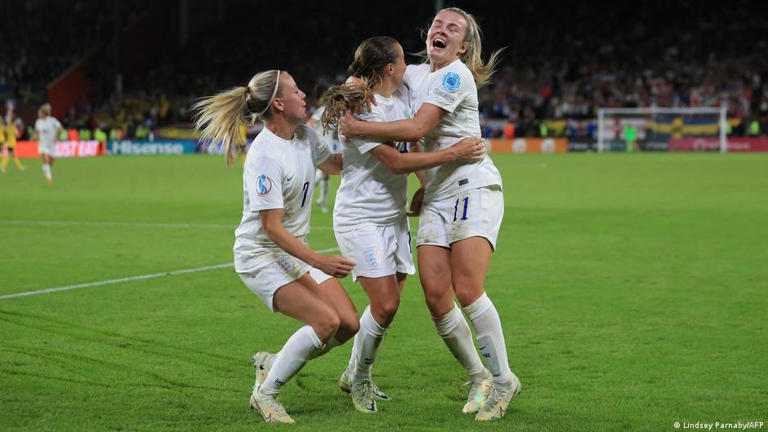 Ashaky opening half an hour from England gave way to a dominant 4-0 semifinal victory over Sweden as the Euro 2022 favorites flexed their muscles. They face either Germany or France in the final high on confidence. With her back to goal, Beth Mead had no sight and no right to find the back of the net. But world-class players find a way in clutch plays.

Controlling Lucy Bronze’s cross and swivelling around in a flash, Sweden’s defense hadn’t the time to clock what was happening before Mead rifled her shot into the bottom corner.

It was a rare moment of composure from England in a chaotic opening half hour, but it was all they needed to steal an undeserved lead and take control of a Euro 2022 semifinal which had threatened to pass them by.

From then on, England were transformed and showed exactly why they’re considered favorites at their home tournament.

Following the 34-minute opener, they finished the half with renewed swagger and confidence, before returning from the break with furious determination.

On 48 minutes, Lucy Bronze expertly guided a sumptuous header into the net, through Ellen White’s decoy legs, to make it 2-0. Sweden were stunned, Bramall Lane was rocking.

Until Mead’s heroics, however, England looked frazzled. Sweden were harassing their midfield with ferocity and more than a few times Mary Earps urged her teammates to calm down.

The goalkeeper had been forced into a fantastic save from Sofia Jakobsson in the first minute after Sweden turned over possession in midfield and launched a rapid assault on goal.

England nerves were getting the better of them in front of a fervent home crowd. Stina Blackstenius hit the crossbar from a corner after nine minutes, while only a desperate Fran Kirby challenge prevented Filippa Angeldahl opening the scoring on 24 minutes.

But once Mead found the back of the net with her sixth goal of the tournament, Sweden’s shape crumbled under the weight of England’s bravado. While center forward White had another quiet match leading the line, England’s other two veterans guided this young team past a far more experienced Sweden side.

Right-back Bronze finished with an assist and a goal, and she also teed up substitute Alessia Russo on 68 minutes for an easy tap-in.

The 23-year-old livewire may have fluffed her initial chance, but she chased down the rebound and somehow squeezed a cheeky back-heel past three Swedish players for England’s third.

And midfielder Kirby, who’s been excellent throughout the tournament, capped off the 4-0 victory with an outrageous effort from distance which caught Hedvig Lindhal off her line. There were fist pumps, roars of relief, and tears as the final whistle sounded. Coach Sarina Wiegman was composed as she marched towards her second straight Euros final.

The Lionesses showed character to weather an early storm from Sweden and overcome early nerves, feeding off a lively home crowd to first chase down and then devour the opposition defense.

It was a ruthless performance in the end, and one which will only further give credence to the hype train around this fledgling team. With nineteen goals scored and just one conceded, England will be confident of bringing home a major trophy on Sunday, no matter the opposition.

Euro 2022: England shake off nerves to cruise to final (msn.com)