Makerere Univerity: Since 2018 Makerere University has been in partnership with Chinese Embassy for Ambassadors’ Scholarship offered by the former ambassador as part of strengthening relations and fueling education in Uganda. 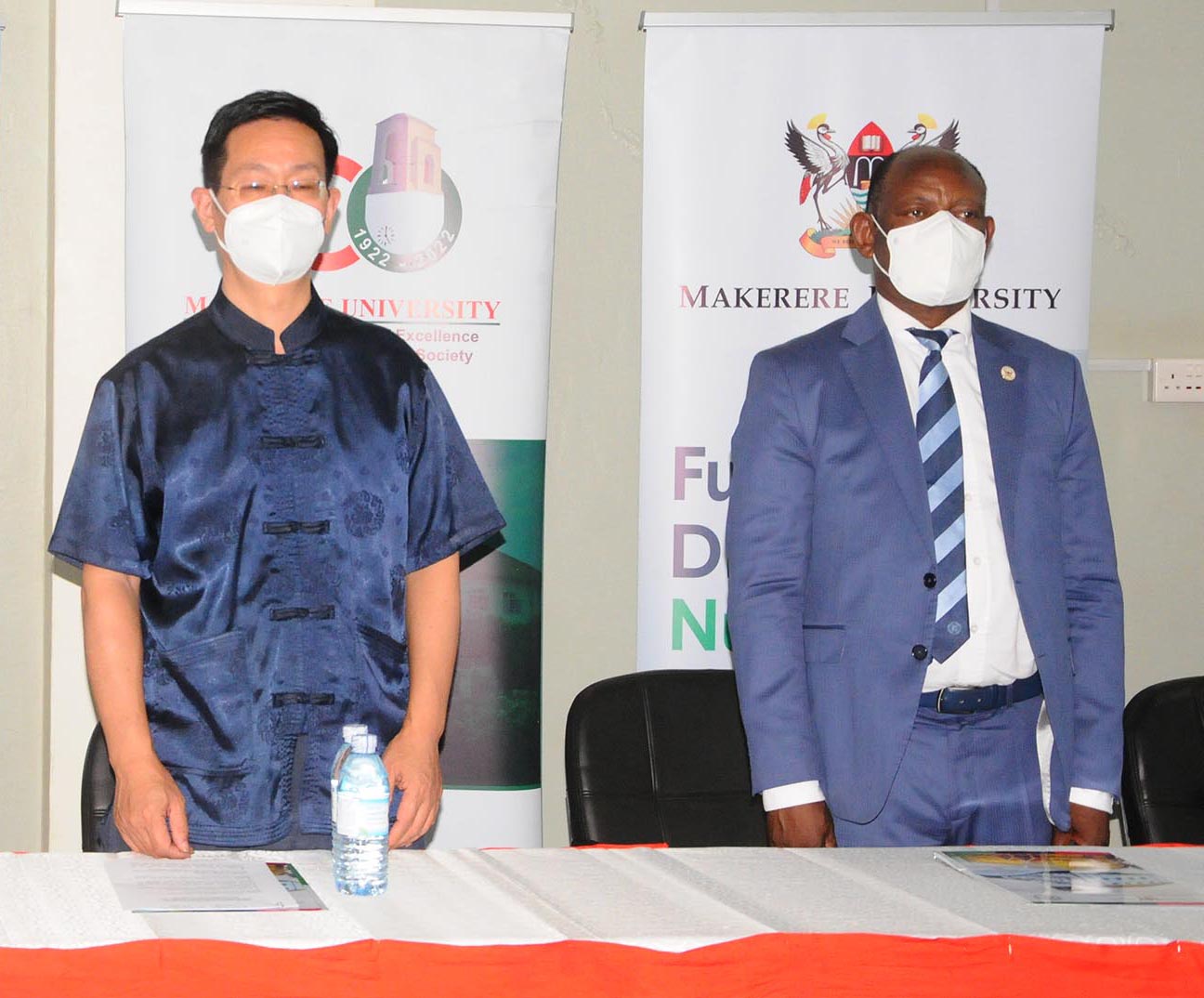 H.E. Zhang Lizhong, the Chinese Ambassador to Uganda and Prof. Barnabas Nawangwe, the Vice Chancellor of Makerere University are seen during the Award ceremony of Chinese Ambassador’s Scholarship for Excellence and Friendship at the University’s Telepresence Centre.Photo by Julius Mugaga Tukacungurwa/KMA Updates.

These scholarships were categorized for students who have attained academic excellence but economically disadvantaged and friendship.

30 students were in first cohort of which 26 have graduated and the four have programmes more than 3 years but in their last semester.

While addressing the congregation, H.E. Zhang Lizhong, Chinese Ambassador to Uganda stated that for over 5 years about 100 students have received scholarships from their Embassy where some have graduated and are dining in active different walks of life.

He said that China is delightful for the people to people exchange as it strengthens their aim of China-Uganda Comprehensive cooperative partnership.

He revealed that china is supporting the Confucius Institute at Makerere University that carry on language teaching and cultural exchanges which better students’ careers development.

He added that in the first phase, over 100 Ugandan local Chinese teachers have graduated and can teach mandarin in Ugandan Schools and that about 500 in progress.

He informed that China National Offshore Oil Corporation (CNOOC) sponsored Lamech a local student who graduated from Makerere College School to study in China University of Petroleum and is now an excellent drilling engineer in addition to Akech Monica a former abductee and child soldier with Lord’s Resistance Army (LRA) whose hands were cut off.

He remarked that such cooperation and interventions are the drivers for their unceasing support to Makerere University and the country at large.

He lauded Makerere University administration to embracing and putting to use the scholarships offered to produce productive citizens.

In his opener, Prof. Barnabas Nawangwe, the Vice Chancellor of Makerere University quoted: “Mandela said that education is the best investment that anyone can give their children and I think history has confirmed I but not everyone can attain it”

“Every year hundreds of of 1000s drop out of school due to lack of fees so if someone supports you it’s amazing and you should embrace it with care. When you get scholarships put it on back of your mind that everyone is looking at you as the one to uplift this country”. Prof. Nawangwe.

He hinted that people who have gone through gets of Makerere are managing important things in the world and impacting positively to change the world.

He implored beneficiaries of these scholarships to follow the footsteps of them and change the fortunes of this country since many yearned for such an opportunity but it was you.

“Avoid anything that may jeopardize your studies and your future because if you do,  you affect your parents, children and your country”. He stated.

“I was very pleased to hear from the director of Gender mainstreaming that all the beneficiaries of these scholarship in the first cohort have graduated and am sure the remaining will make It so if we continue to succeed this way, we may get more sponsorship”. Prof. Nawangwe remarked.

He revealed that there is no Ambassador in Uganda that has ever offered scholarships to Ugandans anywhere and no University has ever benefited from this except no Makerere University. 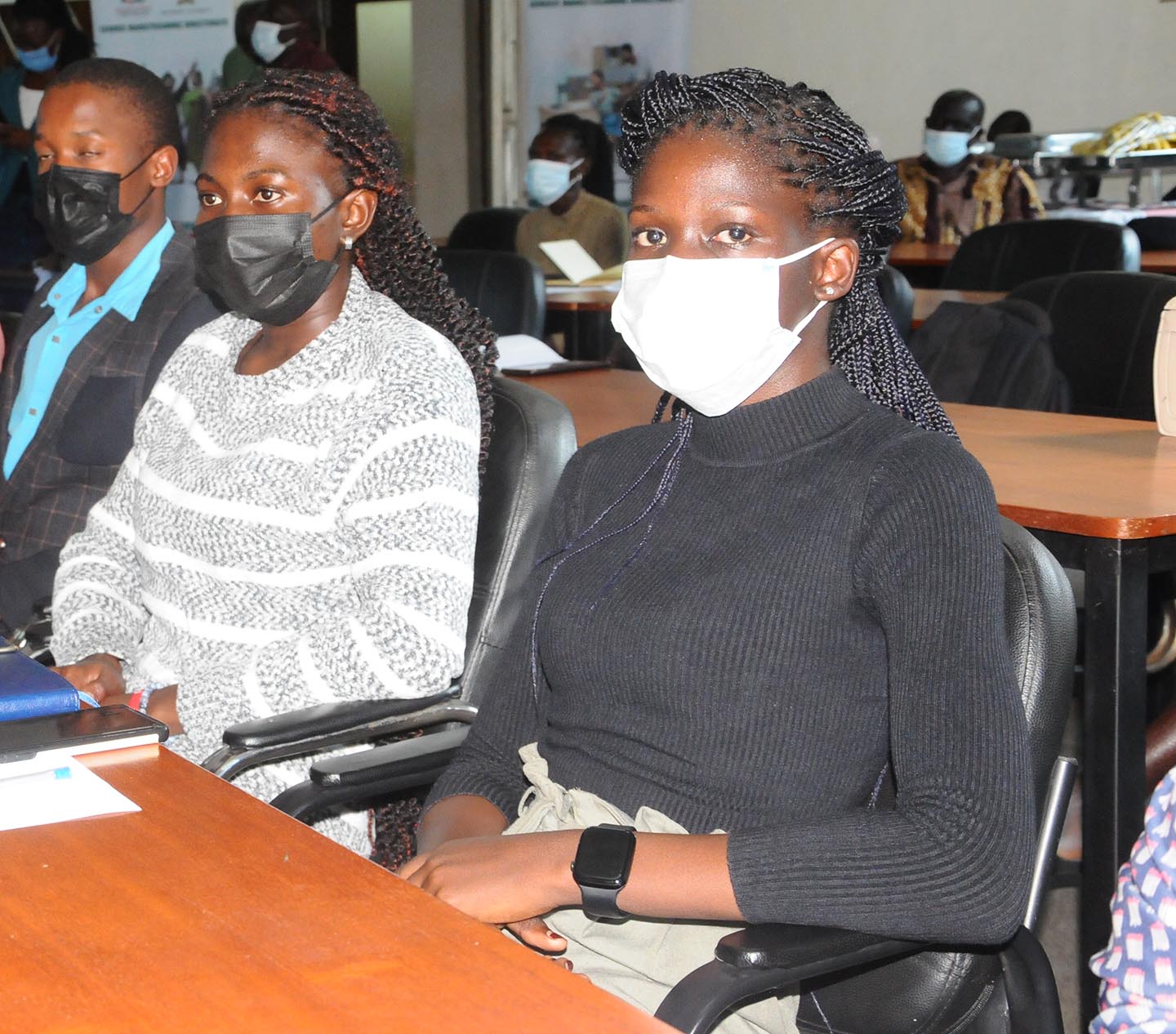 Daphin Naudho (R), a student pursuing Bachelors Degree of Arts and Social Sciences gave a vote of thanks on behalf of beneficiaries of Chinese Ambassador’s Scholarship during the Award Ceremony at Makerere University’s Telepresence Centre. Photo by Julius Mugaga Tukacungurwa/KMA Updates.

Nawudo Daphin a student pursuing Bachelors Degree of Arts and social science one of the beneficially of the scholarship narrated that when she heard of the scholarship program, ran submitted in her application because in her first year struggled with meeting University dues.

Daphin Said that being parentless, she used to struggle hard for her education regardless of being driven by passion. She informed that by good luck she was picked and enrolled on scholarship which has turned her life around and rekindled he her hopes.

“My life has now moved a step forward because now I see my vision being accomplished somewhere i could not reach my goals but I have been given audience and confidence”. Daphin stated.

“A lot has changed in my life through this scholarship, I have been mentored on being confident, pear training, fighting sexual harassment in Makerere University, my life has surely changed”. She added.

“I look forward to establishing a foundation that helps disadvantaged people because am a testimony so i need to extend a hand. So many people have the zeal for education but have no capacity to attain it.”. Daphin.

Other beneficiary students are seen paying attention to communication during the award giving during the Award ceremony of Chinese Ambassador’s Scholarship for Excellence and Friendship at the University’s Telepresence Centre.Photo by Julius Mugaga Tukacungurwa/KMA Updates. 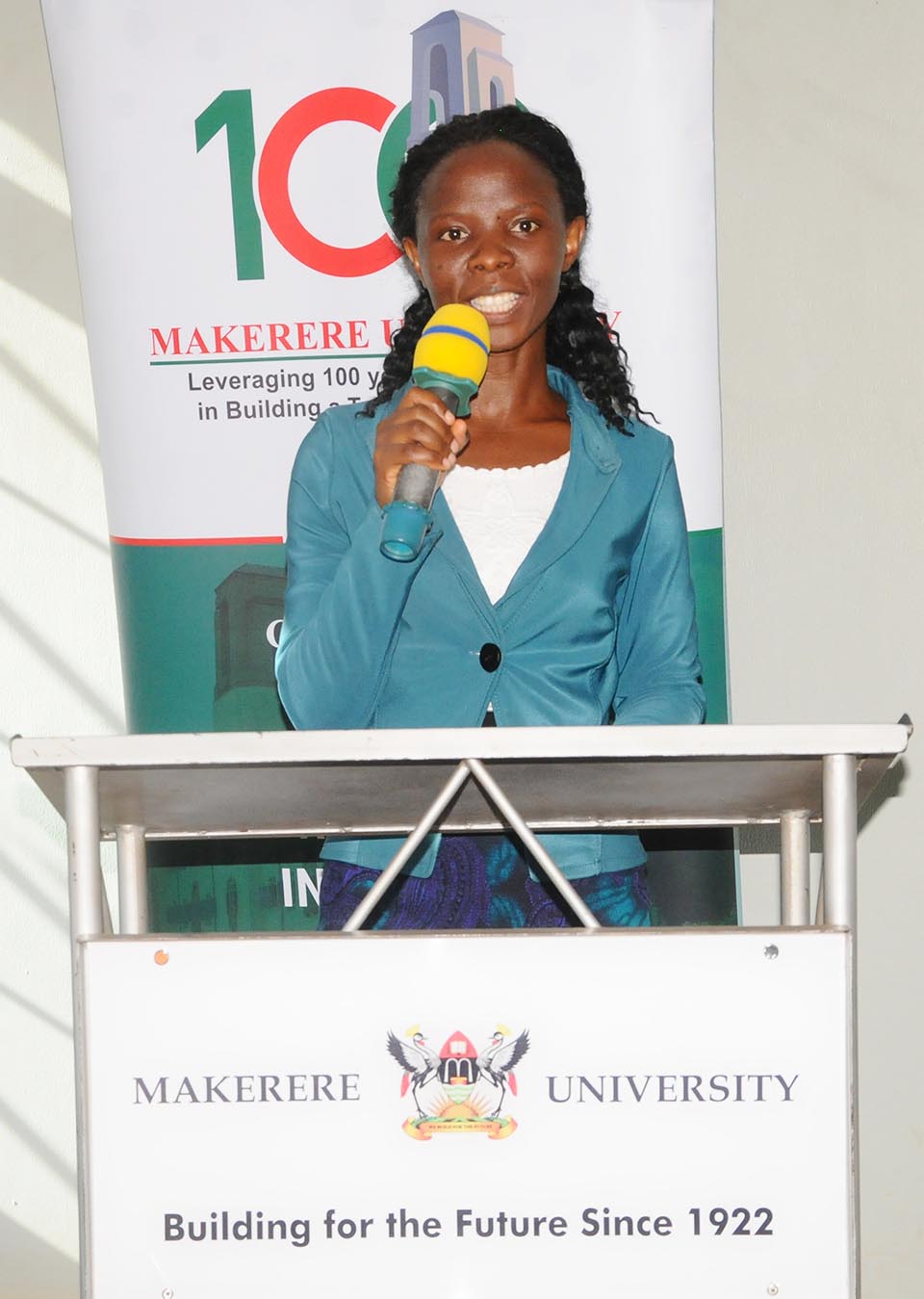 Ritah Namisango, the Principal Public Relations Officer of Makerere University is seen guiding the Award ceremony of Chinese Ambassador’s Scholarship for Excellence and Friendship at the University’s Telepresence Centre as the master of ceremony.Photo by Julius Mugaga Tukacungurwa/KMA Updates.