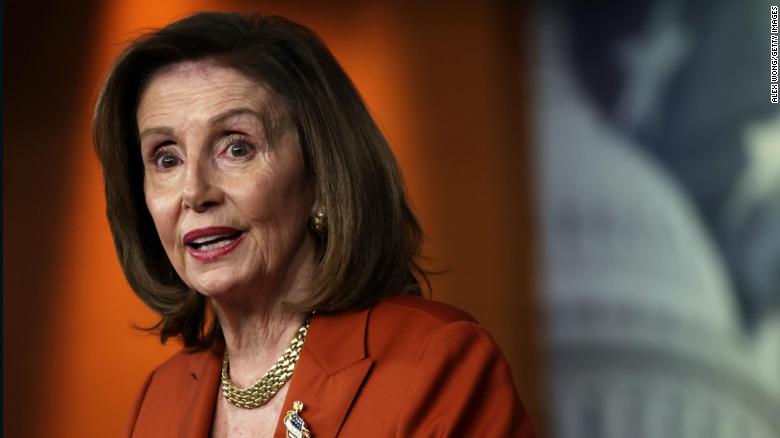 US House of Representatives Speaker Nancy Pelosi speaks during a weekly news conference on Capitol Hill in Washington, DC on June 9.

(CNN)China warned Tuesday it would take “resolute and forceful measures” if US House of Representatives Speaker Nancy Pelosi visits Taiwan, in what would be the highest-level delegation from the United States to the self-governing island in 25 years.

Pelosi, who is second in line of succession to the US presidency, has reportedly outlined plans to take a delegation to Taipei in August, according to the Financial Times, citing people familiar with the matter. Pelosi’s office declined to comment on her travel plans.
August 1 is the anniversary of the founding of China’s People’s Liberation Army.
On Tuesday, China’s Foreign Ministry lashed out at the potential visit, saying it would “have a severe negative impact on the political foundation of China-US relations, and send a gravely wrong signal to ‘Taiwan independence’ separatist forces.”
“If the US insists on going down the wrong path, China will definitely take resolute and forceful measures to firmly defend its national sovereignty and territorial integrity,” ministry spokesperson Zhao Lijian told a news conference. “The United States must be fully responsible for all the consequences caused by this.”
China once saw Europe as a counter to US power. Now ties are at an abysmal low
Beijing’s ruling Communist Party has long claimed Taiwan as part of its territory and has repeatedly vowed to “reunify” the island of 24 million people with the Chinese mainland — by force if necessary — despite having never governed it.
Pelosi had previously planned to lead a US congressional delegation to Taiwan in April, but the trip was postponed after she tested positive for Covid-19. At the time, China had strongly opposed the trip and issued similar warnings.
Her visit would be the first by a sitting House Speaker since Republican Newt Gingrich traveled to Taiwan in 1997.
Taiwan has seen a flurry of visits by American delegations in recent years, especially after the Taiwan Travel Act was signed into law by then US President Donald Trump in March 2018. Since then, US officials and lawmakers have embarked on more than 20 trips to the democratically controlled island, according to a CNN tally.
China, meanwhile, has sent record numbers of war planes near Taiwan, as cross-strait tensions soared to their highest in recent decades.
Asked if he was worried that Pelosi’s Taiwan trip could send the wrong message for the US-China relationship, House Majority Leader Steny Hoyer told CNN: “I think the President’s position is pretty clear on our relationship with Taiwan. So the answer to that question is I don’t think it will be a surprise to the Chinese or be a different message than we’ve been sending.”
Hoyer told CNN he would not join Pelosi on her trip to Taiwan, and did not know when she would be going.

The FT report, published on Saturday, cited six people familiar with the Chinese warnings as saying they were significantly stronger than the threats that Beijing has made in the past when it was unhappy with US actions or policy on Taiwan, which is claimed by China.

The private rhetoric suggested a possible military response, the FT cited several people familiar with the situation as saying.

The White House National Security Council and the State Department declined to comment on the FT report.

“We are seriously prepared,” spokesperson Zhao Lijian told reporters at a regular briefing on Monday, when asked for comment about the contents of the report.

When asked what kind of response China was “seriously prepared for” and if it would be a military or a diplomatic response Zhao said: “If the US side is bent on going its own way, China will take strong measures to resolutely respond and counteract.”

“The United States should be held responsible for any serious consequences,” he added.

China has been stepping up military activity around Taiwan seeking to pressure the democratically elected government there to accept Chinese sovereignty.

Taiwan’s government says only the island’s 23 million people can decide their future, and while it wants peace will defend itself if attacked.

On Wednesday, US President Joe Biden said he plans to speak with Chinese President Xi Jinping by the end of the month. Biden appeared to cast doubt on the reported Pelosi trip to Taiwan.

“I think that the military thinks it’s not a good idea right now, but I don’t know what the status of it is,” Biden told reporters.