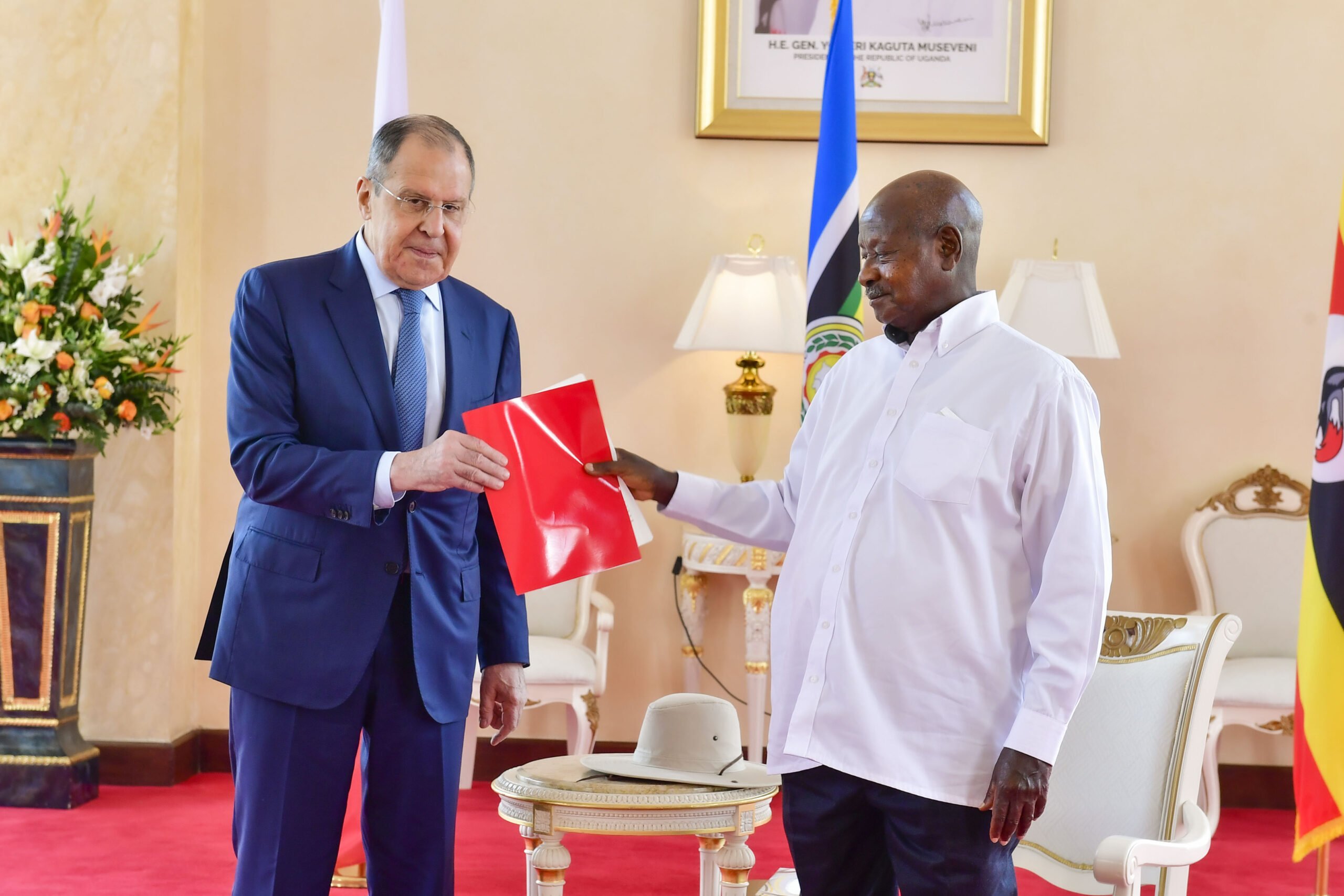 How can we automatically be against those who have been with us for the last 100 years? We have forgiven those who did bad things to us and we are working with them, how about those who have never harmed us? pic.twitter.com/BKmN5ApgZu

“We want to trade with all countries of the world – President

Sergey Lavrov and his delegation who have been on a two day official visit to Uganda as part of his tour of African countries including Ethiopia, Egypt, Uganda and Congo-Brazzaville later held a bilateral meeting with President Yoweri Museveni and his delegation before both leaders addressed a joint press conference.

“The people of Uganda and myself welcome you here ,you are the first high level Russian government leader who has ever visited Uganda, he said adding, “Russia has been supporting anti colonial African movement for the last 100 years.”

President Museveni noted that Russia is one of the countries which came to the defence of African countries in the fight against colonialism at a time when African chiefs failed to defend their countries .

He said there is a lot of potential areas of cooperation in addition to security citing agriculture such as coffee, bananas, tea, milk and beef among others.

He also highlighted cooperation in space science ,nuclear energy and pathogenic economy saying that with the Uganda’ market together with East Africa and Africa in general is enough potential for trade.

President Museveni said that with trade agreements, some of the African products that have been going to Russia through western Europe could go directly to benefit both sides.

Commenting on the global conflict between Ukraine and Russia, President Museveni said they don’t believe in being enemies of somebody’s enemy.

Russia’ Sergey Lavrov said that he had a fruitful engagement with President Museveni concerning the international agenda among other matters discussed.

He acknowledged the long standing relations between Russia and Uganda that started with the fight against ant colonialism movements in Africa and said his country supports reforming the United Nations (UN) security council to give a more powerful role to developing countries.

“We confirmed our positions when it comes to reforming the UN Security council. The problem is underrepresentation of the developing countries. The solution is more representation of Asian, African and Latin American Countries,” he said.

Lavrov said the two leaders found alot of promising domains including energy, agriculture and cyber security among other areas.

Russian exports to Africa accounts for US $14 billion a year and imports of African products of about US $ 5 billion making the bilateral trade to about US $ 20b .

Russian Trade and Investment has been increasing in Africa and like China it has also viewed the African Continental Free Trade (AFCFTA) which came into effect on Jan 1st this year as an opportunity.

Russia and Uganda have agreed to co-operate on areas of economy, agriculture, cyber security, space technology, nuclear technology, pathogen technology and ideological studies. This was announced during a presser by President Museveni and FM Sergey Lavrov at State House, Entebbe.

The meeting was attended by Uganda’s Foreign Affairs Minister Jeje Odongo, State Minister Okello-Oryem and Minister of Defence and Veteran Affairs Vincent Bamulangaki Ssempijja among others. 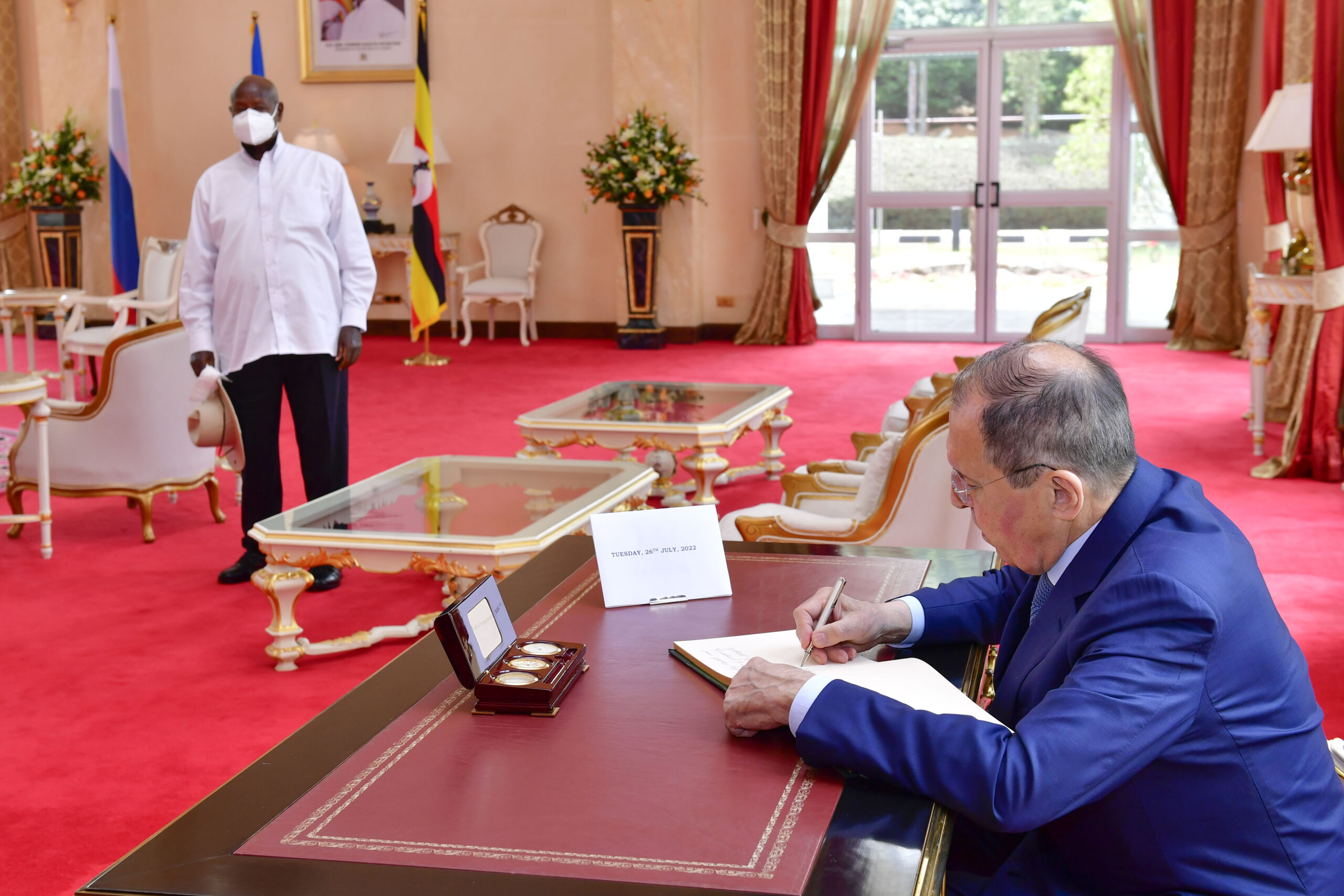 Russia’s Foreign Minister, Sergey Lavrov signs into the guest book at State House Entebbe on Tuesday July 26 as President Museveni looks on. Sergey is in Uganda on a two-day working visit. PPU Photo 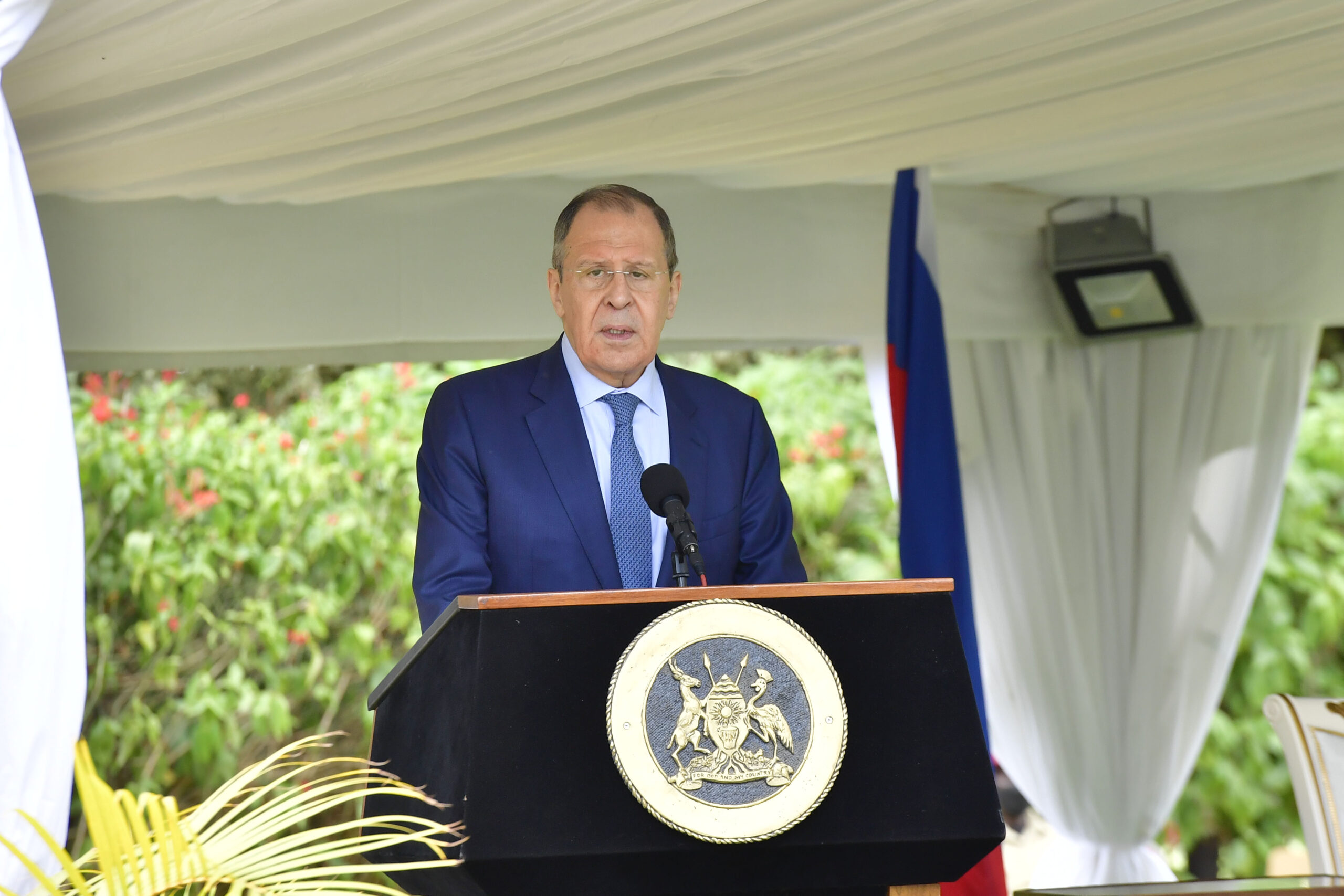 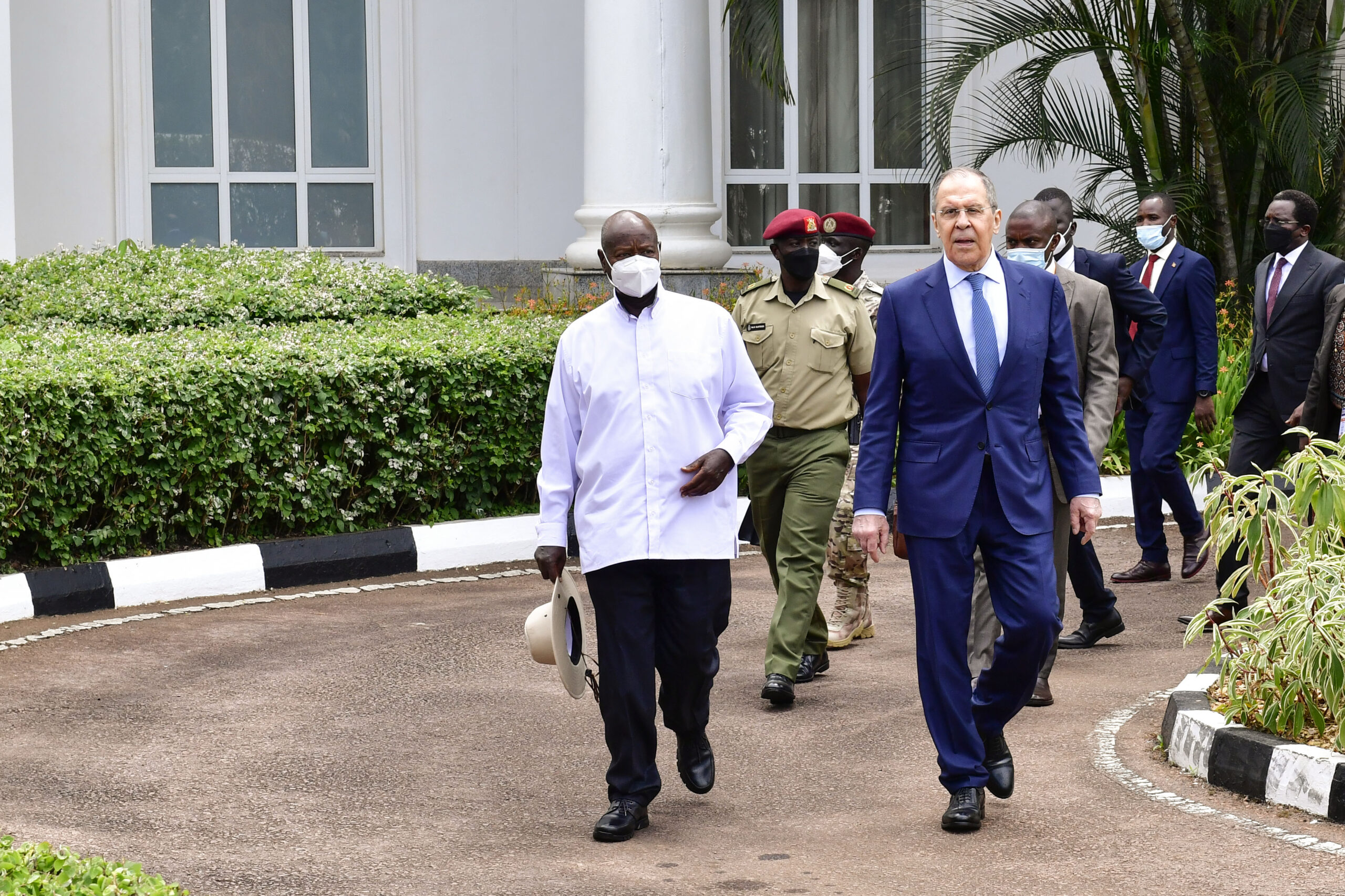 President Museveni chatting with Russia’s Foreign Minister, Sergey Lavrov after a meeting at State House Entebbe on Tuesday July 26, 2022. Sergey is in Uganda on a two-day working visit. PPU Photo 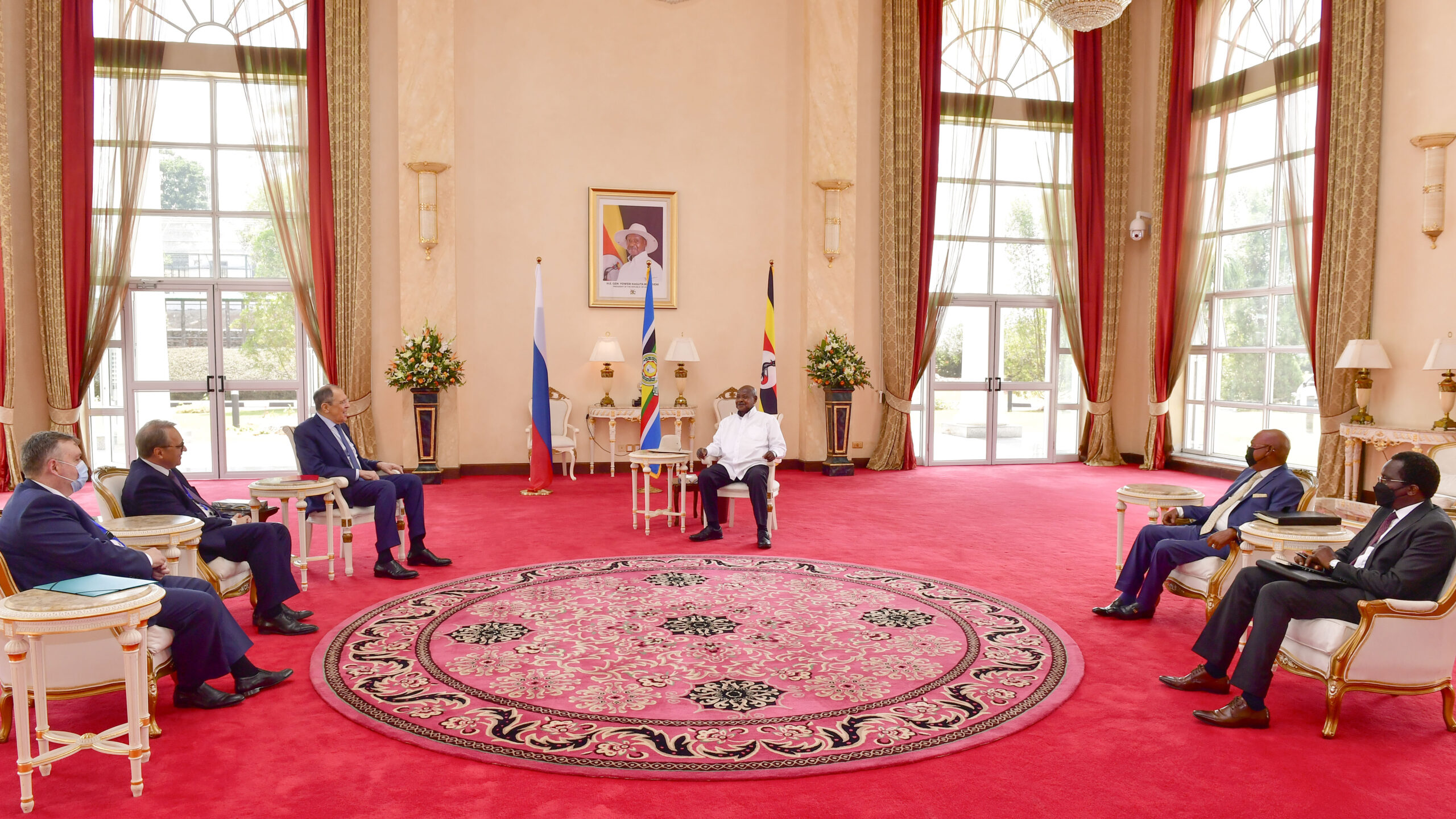 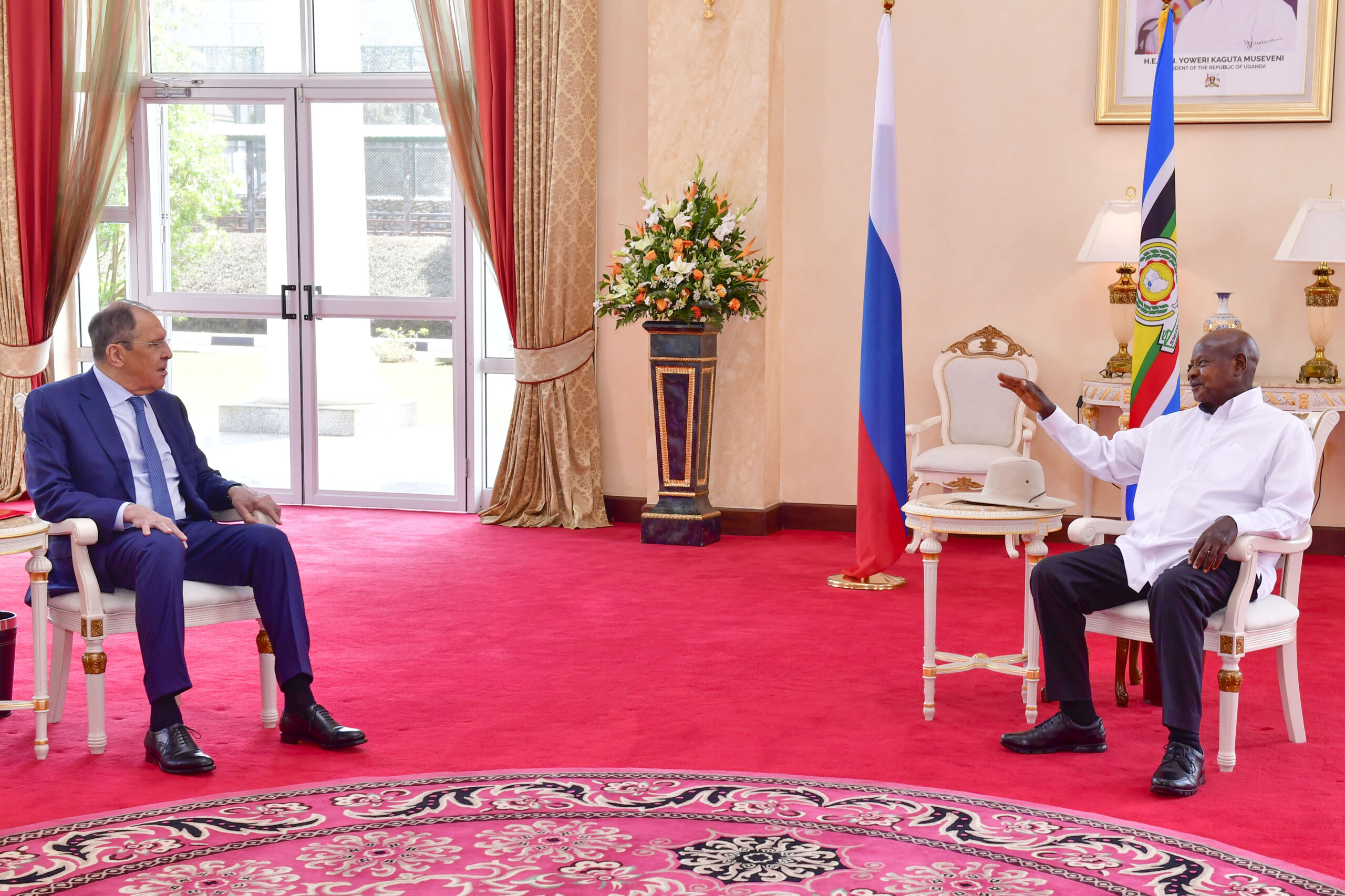