Boris Johnson could serve in a Liz Truss Cabinet, a minister and close ally of the Tory leadership contender has indicated.

James Cleverly, the Education Secretary, said Mr Johnson was an “incredibly talented politician” and did not rule out the possibility of him making a return to the front bench.

It comes after two Cabinet ministers said Mr Johnson is finished as Prime Minister in an attempt to put to bed the suggestion that he could make a shock return to Number 10.

But speculation continues to swirl that he could remain in top level politics, with Mr Cleverly saying he would be “comfortable” with this as long as Ms Truss was.

Asked whether he would support Mr Johnson getting a senior role in Government, he said: “I’ve worked with him for years, you know I supported him. I continue to regard him as an incredibly effective politician.”

He told Sky News it was “not for me to start dictating to Liz who she puts into her Cabinet” but added that Mr Johnson is “an incredibly talented politician”.

“Whether he would want to serve after the bruising that he’s got at the moment, that might be another matter,” he said. 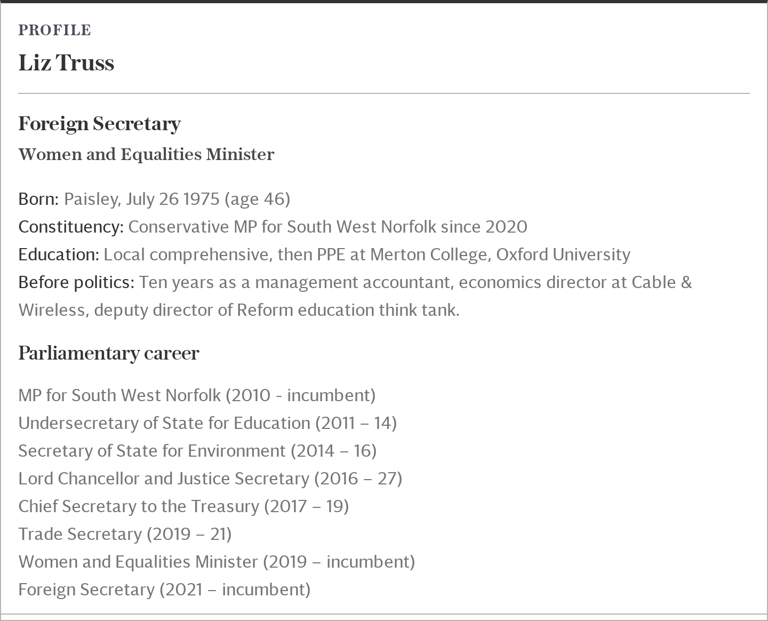 © Provided by The TelegraphProfile Liz Truss

A senior source in Ms Truss’s campaign refused to be drawn on whether Mr Johnson could serve under her, saying she was “not making any plans at the moment” about who would serve in her Cabinet because she was “focused on the members”.

However, when leadership candidates were asked during a live debate on ITV to raise their hands if they would allow Mr Johnson to serve in their Cabinet as Prime Minister, none did so.

By Monday morning, over 10,000 Conservative party members had signed a petition calling for Mr Johnson to be reinstated as Prime Minister.

The petition, organised by Lord Cruddas of Shoreditch, a former party treasurer, and David Campbell-Bannerman, former Tory MEP, demands that party members have a say in Mr Johnson’s future.

The members want a second ballot to confirm MPs’ decision to force his resignation, to run concurrently with the official leadership ballot between Ms Truss and Rishi Sunak.

Last week Michael Fabricant, a Johnson loyalist, became the first MP to support the “Bring Back Boris” campaign, telling The Telegraph: “MPs have clearly misread the mood of the party membership on this and so many other matters.”

On Sunday, Therese Coffey, the Work and Pensions Secretary, dismissed claims the Prime Minister had told allies he would be back within a year as “speculation and tittle-tattle”.

Ms Coffey, who is backing Ms Truss, said Mr Johnson “chose to step down” and would “continue, I’m sure, to be supportive of the next Conservative prime minister and into the next election”.

Meanwhile, Sir Robert Buckland, the Welsh Secretary who supports Mr Sunak’s leadership bid, said the Tory Party had already moved on and there was virtually no chance of Mr Johnson returning.