Do not interfere with August polls, DP Ruto tells Uhuru 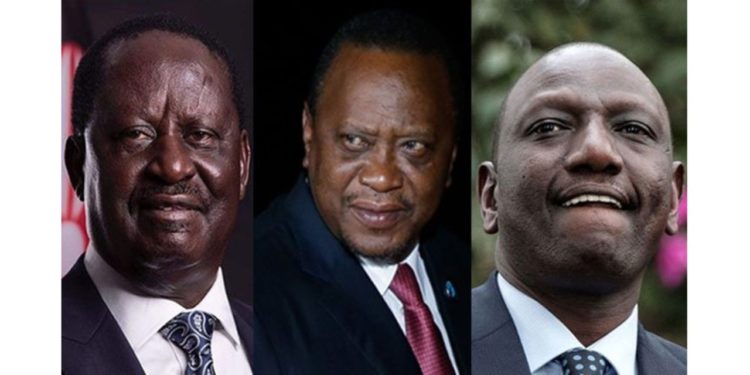 Deputy President William Ruto has told off his boss, President Uhuru Kenyatta, asking him not to interfere with the August 9 General Election but prepare to hand over power peacefully to his successor.

Dr Ruto said he had been subjected to untold suffering and humiliation in the hands of President Kenyatta in the last five years, but he had chosen to soldier on.

He, however, said the President would enjoy state protection like all other former presidents in the country and would not be harassed in retirement if UDA won the elections.

Addressing a rally in the South Rift region at Kapkatet Stadium in Kericho County, the UDA presidential candidate led his Kenya Kwanza allies in protesting alleged interference and intimidation of Independent Electoral and Boundaries Commission (IEBC) officials ahead of the next month’s elections.

“We are not asking for any favour from you, we just want you to discharge your responsibility as the President of Kenya by making sure there are no monkey games along the election process.

“You have a constitutional duty to ensure we have a free, fair and democratic election on August 9. Please, we want to ask you not to allow the security agencies, people with sinister motives, to intimidate, blackmail IEBC or undermine the elections of August 9,” Dr Ruto said.

READ: I made you president, William Ruto tells Uhuru Kenyatta

The DP said, if he is elected president, he would not take revenge against President Kenyatta, but would only seek to tweak the economic model in the country to create job opportunities for Kenyans.

The DP urged Kenyans to “have faith in the Kenya Kwanza team to remodel the country’s economy”, to enable business and industry to thrive to create employment opportunities for Kenyans.

“Our competitors are children of the privileged and do not understand the suffering the people have endured from a battered economy. By the grace of God we have gotten here and God willing ascend to the presidency,” he said.

He went on: “We want President Kenyatta to go home in peace and let us run government…many of my friends have suffered for standing with me with Kenya Revenue Authority and police dispatched to harass them…but I want to assure everyone that we shall stand with them and we shall win this election, God willing,”

He said UDA was the most popular party in the country despite the challenges its leaders were facing.

For his part, Mr Gachagua urged police and county administrators not to agree to be used to interfere with the election process.

“Police and administrators should know that the people pushing them to do the wrong things ahead of the elections will go home with President Kenyatta and Mr Odinga after the elections,” said Mr Gachagua.

The Mathira MP claimed that during the recent debate with Azimio la Umoja One Kenya Presidential running mate Martha Karua, he had 17 cases he wanted to cite on “state capture and corruption”.

Tharaka-Nithi Senator Kithure  Kindiki said President Kenyatta had betrayed his close allies in his second term in office and dispatched state agencies like KRA and police to intimidate them on frivolous grounds in a bid to sway their political stand.

“You (President Kenyatta) have hurt our businesses, intimidated and betrayed us, put all manner of obstacles before us even after we rallied the people to vote for you three times for the presidency. But we are telling you to prepare to hand over power in peace,” Prof Kindiki said.

ANC leader Musalia Mudavadi said Kenya Kwanza would form a commission to look into cases of interference in the election process in the country if it wins the August 9 polls.

“You can undermine democracy, but you would not defeat it. We will ensure that all tenets of democracy in the country are entrenched and protected.

“We shall institute an inquiry on the state officers interfering with the election process and undermining IEBC. The time is coming and it is not far. We shall deliver the presidency in a free and fair poll even with all the roadblocks and state machinery deployed against us,” Mr Mudavadi said.

“We stand here to reassure Mr Chebukati’s team that we have faith in you to deliver a credible, free and fair poll,” Mr Wetang’ula said.

He claimed Mr Odinga’s campaign machinery was “being oiled by the state”.  “You have two weeks to enjoy the largesse of the government before you exit,” he said.