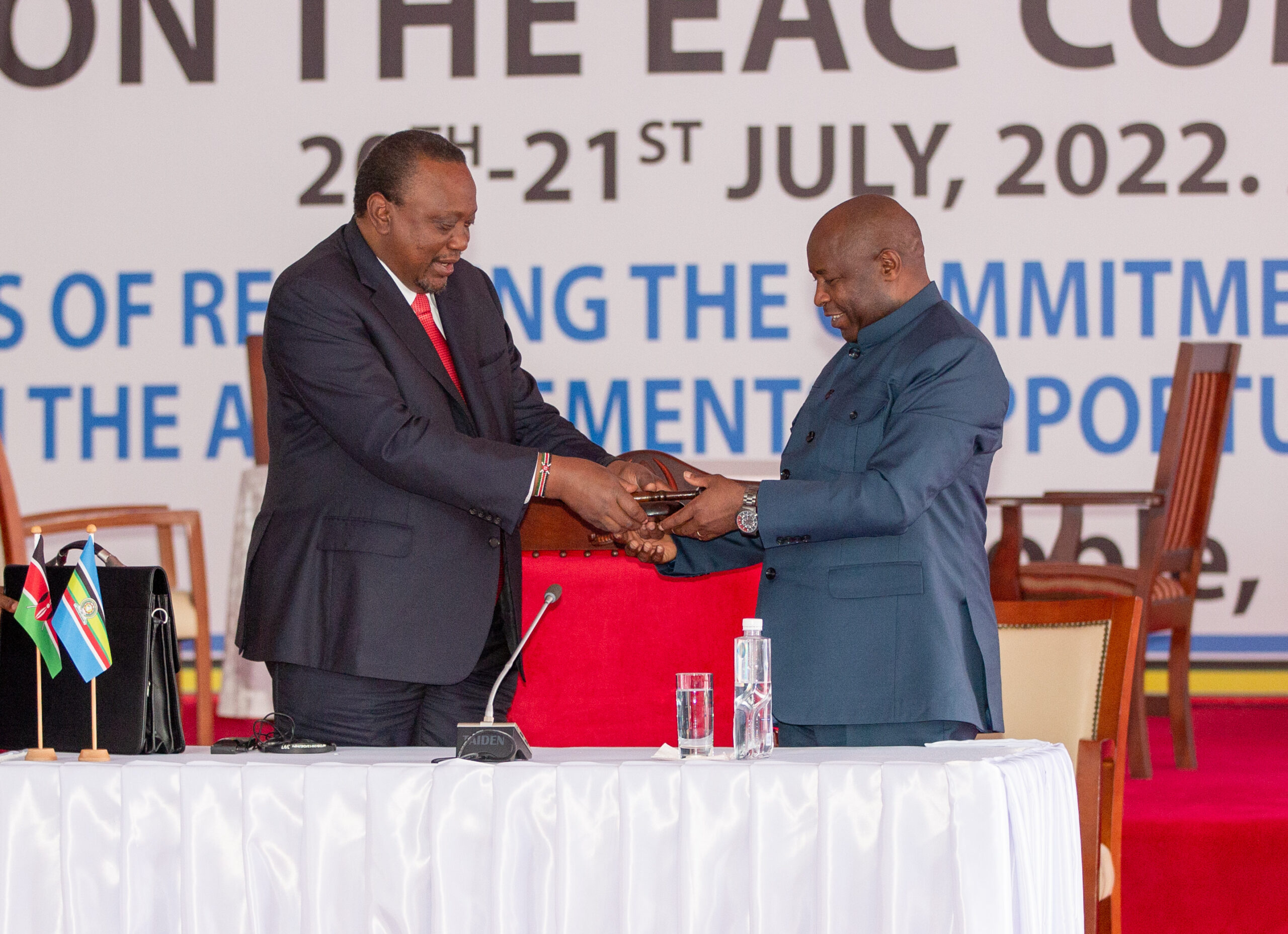 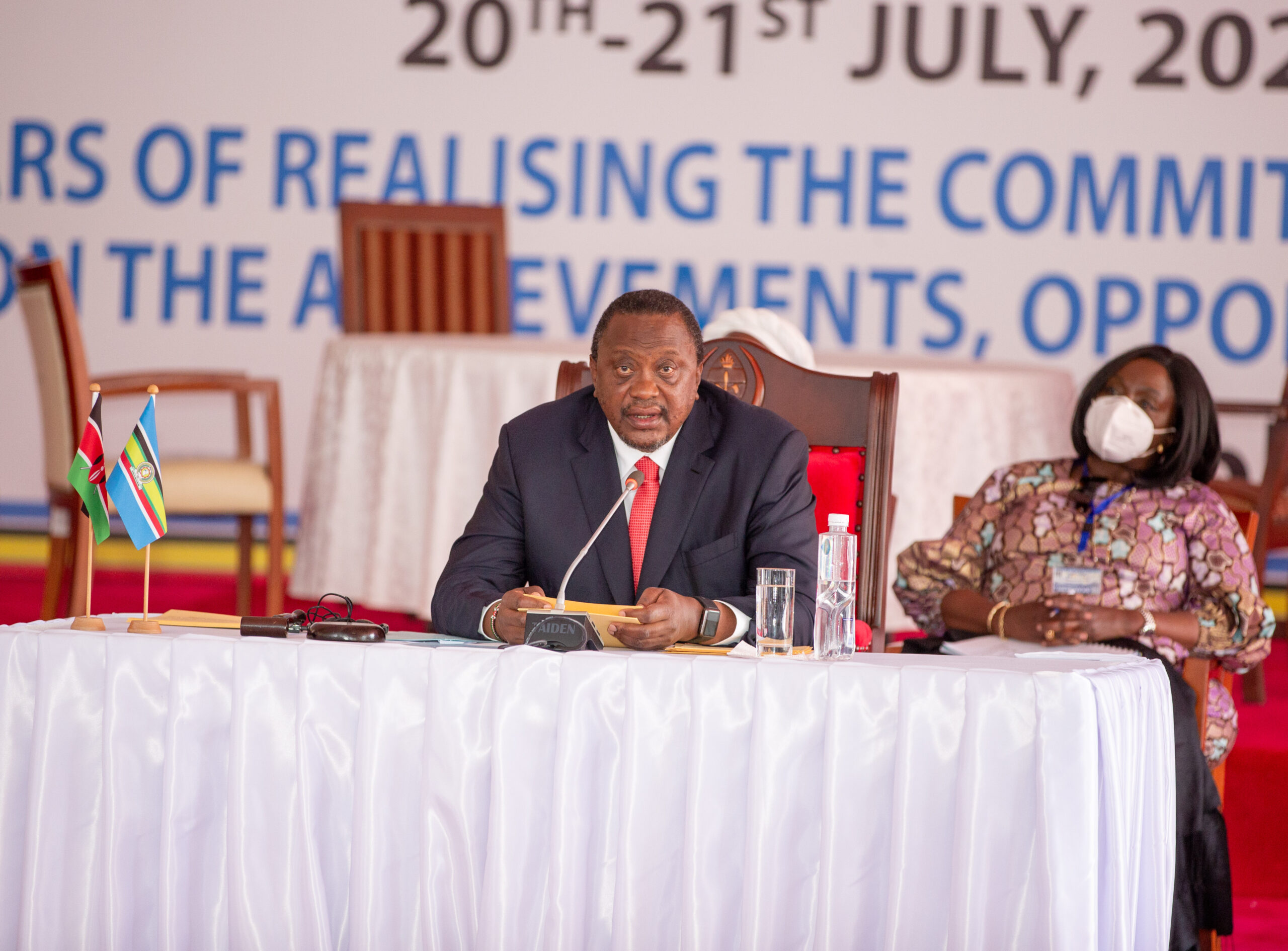 Acknowledging the progress the EAC has made since its re-establishment more than two decades ago, the President emphasized the need for the leaders to remain focused on the goals of the community to meet the desire for an inclusive, equitable and responsive integration process that addresses the daily needs of the EAC residents. 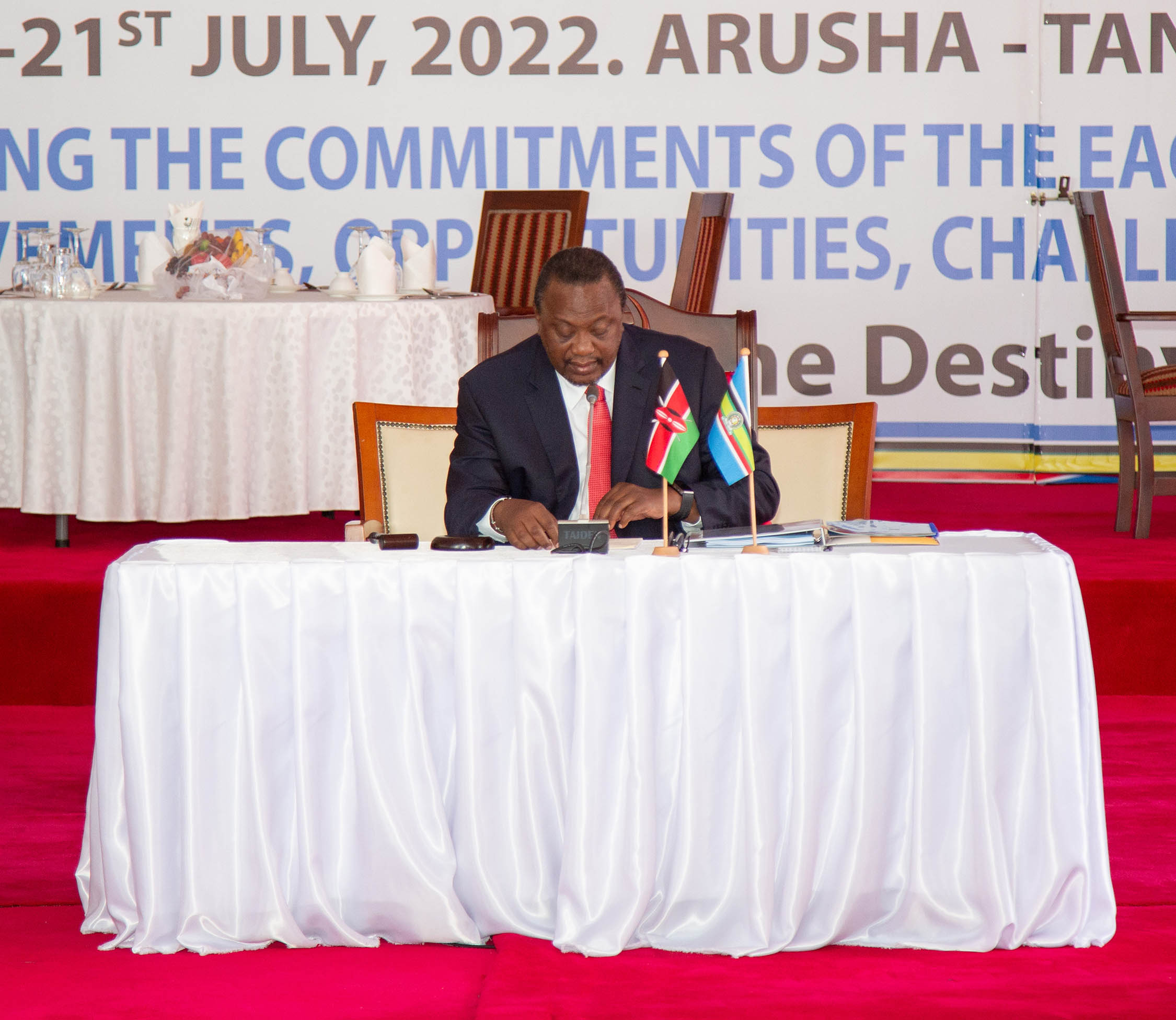 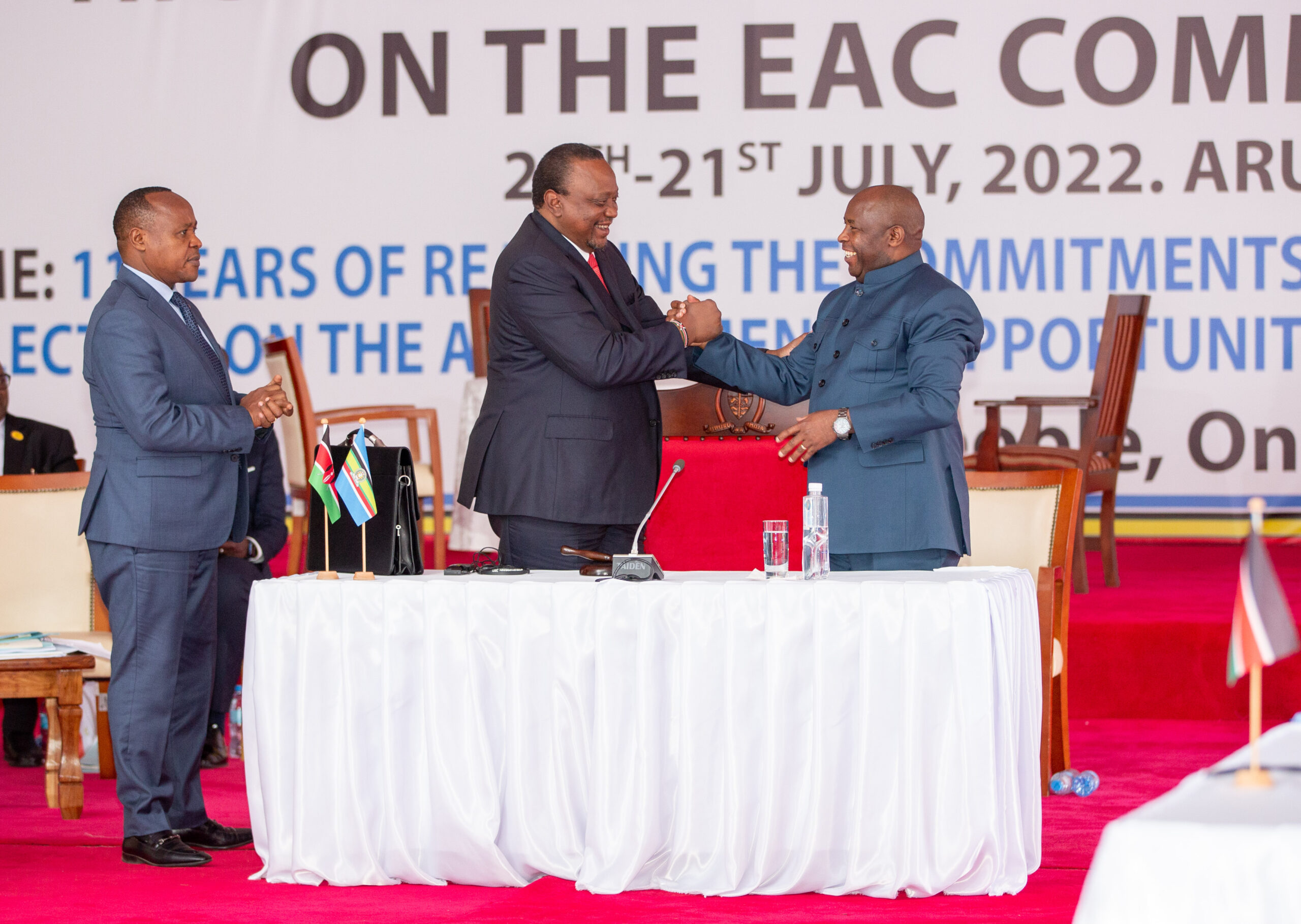 “The citizens are looking to us to fast-track and implement programmes and projects that will transform our region.  While the EAC is ranked as one of the most integrated regional economic communities (RECs) in Africa, our citizens are yet to enjoy the freedoms and rights of integration fully.

“Therefore, our responsibility at all leadership levels should be to ensure that the objectives of establishing the community are on course,” the President said.

President Kenyatta spoke on Friday when he addressed the 22nd Ordinary Summit of the East African Community Heads of State at the EAC headquarters in Arusha, Tanzania.

The Head of State said the citizens of East Africa must be involved in all stages of the integration process by making them aware of what is happening in the community as part of ensuring inclusivity.

“While I appreciate the efforts being carried out by partner states as well as the organs and institutions of the community in sensitising the populace, I believe we can and should do more to ensure that the people of East Africa are not left behind in the integration process.

“Of equal importance are partnerships with all stakeholders in the integration process. Experience has shown that stakeholder partnership is the key to achieving sustainable development globally.  As we move forward, we must invest in building collaboration with the private sector and development partners,” President Kenyatta said.

The President recalled that while re-establishing the EAC, the leaders envisioned four pillars namely the Customs Union, the Common Market, the Monetary Union and the Political Federation to drive the integration process.

“Among them, the operationalisation of the Customs Union established in 2005 and the Common Market established in 2010 are on course.  Albeit slow-paced, the community has also made significant progress in the Monetary Union whose protocol was ratified eight years ago,” the President said. 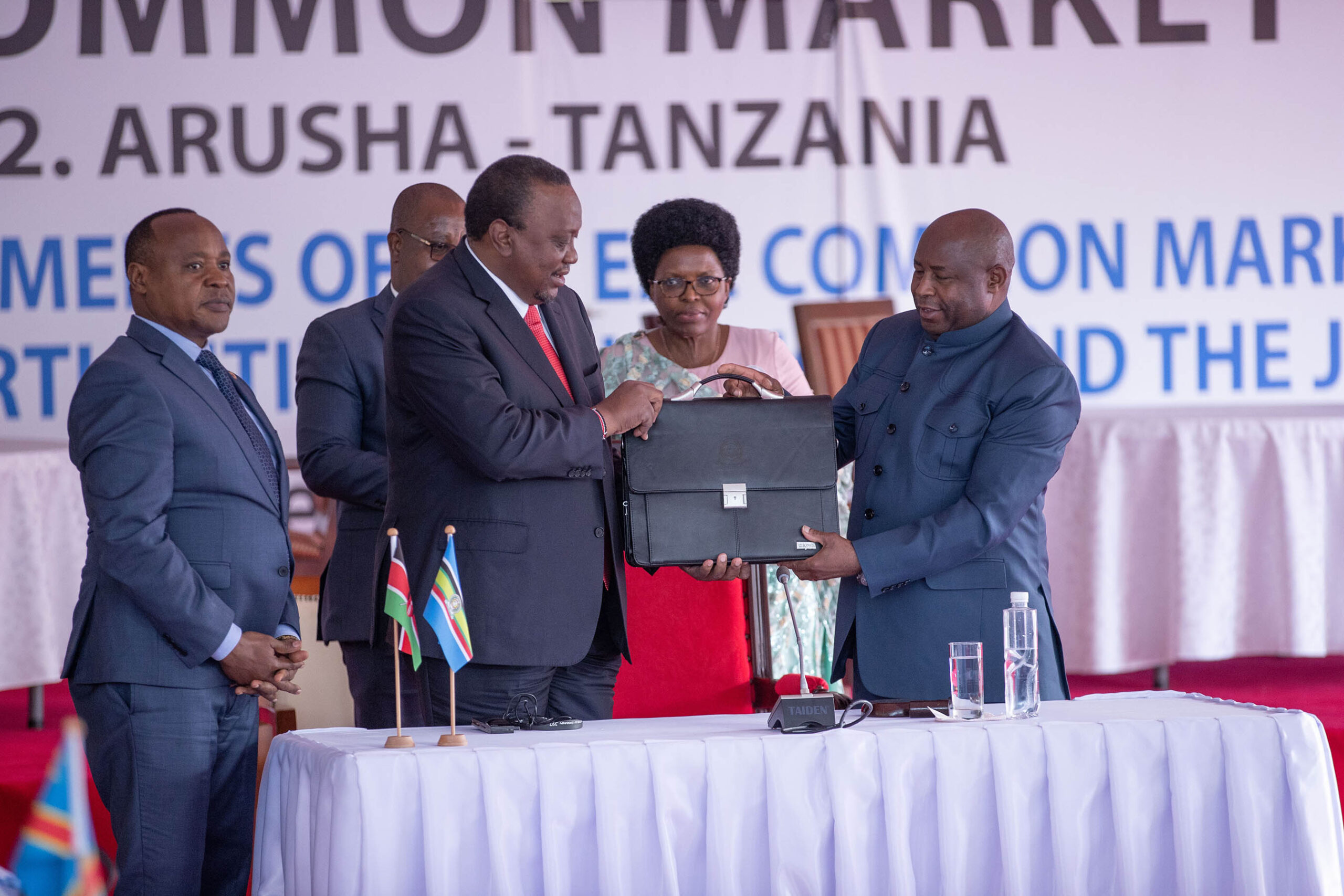 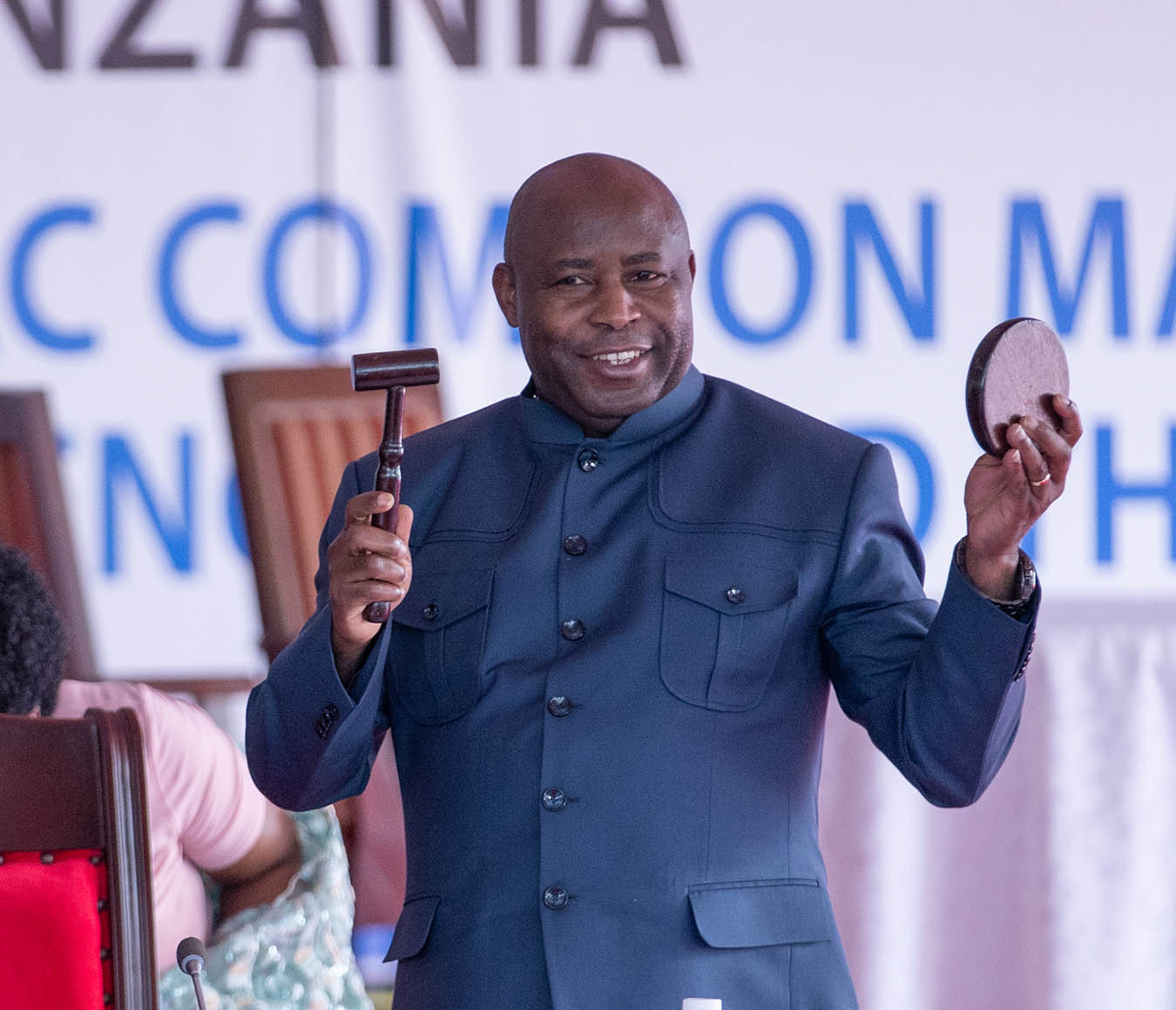 President Kenyatta took the opportunity to highlight some of the key EAC achievements during his tenure.

The achievements included the ratification of the African Continental Free Trade Area (ACFTA) ambitious trade pact by all EAC states and the deepening of financial integration where indigenous banks adopted a regional business model motivated by client-demand.

Other achievements included the declassification of the seas along the East African coast by Kenya, Uganda and Rwanda to reduce the cost of insurance and shipping and lower the cost of doing business through the ports of Lamu, Mombasa and Dar es Salaam.

President Kenyatta said it was also during his tenure at the helm of the EAC that Kenya and South Sudan waived the visa requirements for both their citizens.

“In line with Article 10 of the EAC Common Market Protocol, the two partner states committed to allow workers from each of their countries to accept employment within each other’s territory. South Sudan and Uganda also waived visa requirements for their nationals,” the President said.

He added that during his tenure Kenya and Uganda endorsed the construction of the Kshs 7 billion Angololo Irrigation and Water Resources Development Project that will benefit 127,000 people.

“The project will irrigate 3,300 hectares of farmland, and supply water to 20,000 households in Busia and Bungoma counties of Kenya and Tororo district of Uganda.  It will also generate 1.75 megawatts of hydropower,” he said.

On the expanded EAC region, President Kenyatta said he looked forward to the admission of Somalia into the regional economic bloc.

During the summit, President Kenyatta handed over the mantle of the EAC leadership to President Ndayishimiye of Burundi and congratulated him for taking over as the chairperson of the summit of EAC Heads of State.

At the same time, President Kenyatta was appointed by the East African Community to be the DR Congo peace process facilitator.

In his acceptance speech, President Évariste Ndayishimiye pledged to work closely with all EAC leaders to take the community to a higher level focused on improving the welfare of the EAC citizens.

In their remarks, host President Samia Suluhu Hassan and President Yoweri Museveni of Uganda commended President Kenyatta for his visionary leadership of the EAC that saw the community record significant achievement during his tenure.

On his part, Somali President Hassan Sheikh Mohamud, who attended the summit as a special guest, affirmed his country’s commitment to joining the EAC community.

Earlier, President Kenyatta and President Samia Suluhu Hassan presided over the official opening of the 42.4 km Arusha Bypass road, one of the three regional road projects that have benefitted Arusha, the EAC headquarters.

The others include the 14km Arusha-Tengeru dual carriageway which is part of the Arusha-Holili-Taveta-Voi road and the 243km Arusha-Namanga-Athi River road which was completed and inaugurated by EAC leaders in 2012.